Warning: The following contain spoilers about the season six premiere of Once Upon a Time. If you haven't watched yet, you may want to bookmark this page and come back once you have. Proceed with caution.

That's the question on everyone's mind after that shocking scene in the season premiere of Once Upon a Time that gave us a glimpse of the Savior's eventual very unhappy ending, stabbed by a hooded figure in the middle of Storybrooke as her family look on in horror. And it's certainly one that will be on Emma's (Jennifer Morrison) mind as the season progresses. But could the show ever truly go through with killing her off? Co-creators Edward Kitsis and Adam Horowitz sure want you to think so. 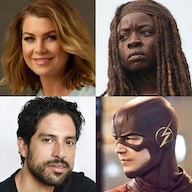 "I would say that that is a question that we are posing," Kitsis told reporters following a screening of the premiere episode. "And we have seen that I guess that's what we're going to explore this season."

"I'd also add that the show remains a show about hope," Horowitz cautioned.

As Kitsis explained it, the mystery surrounding Emma's fate is a way for them to really dig into the complicated character this season. "I think what we really wanted to do was get inside Emma's head," he explained. "We've seen her grow and fight in all these travels, and we thought, well, what would happen if you really did all this? Is it fair to return the happy endings of everyone else and then be told yours doesn't come? Would you still keep doing your job? Would you be doing it out of sake of duty or because you believe in it?" 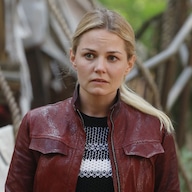 And if you think you know when the show will reveal all based on the formula the show's settled into over the past few seasons, think again. "This year's going to be surprising because there are things that happen throughout that you don't think because the pattern of the show usually is a villain comes to town and then we defeat Hyde in 10, and then the last thing, we show you what the next thing is, and we're not doing that this year," Kitsis said. "We are just telling the stories."

Of course, Emma's dark future was hardly the only major development in the premiere.

After teasing the arrival of Aladdin this season, the premiere revealed that everyone's favorite street urchin is (was?) also a Savior, meaning there are (or were) others who came before Emma. Look forward to meeting more of them. "What I'll say is this, without trying to spoil too much, is if last year, we were exploring Dark Ones and that mythology, and this year, we're really trying to explore Savior mythology and what it means to be a Savior," Horowitz teased. "Who they could've been before and who they could be." 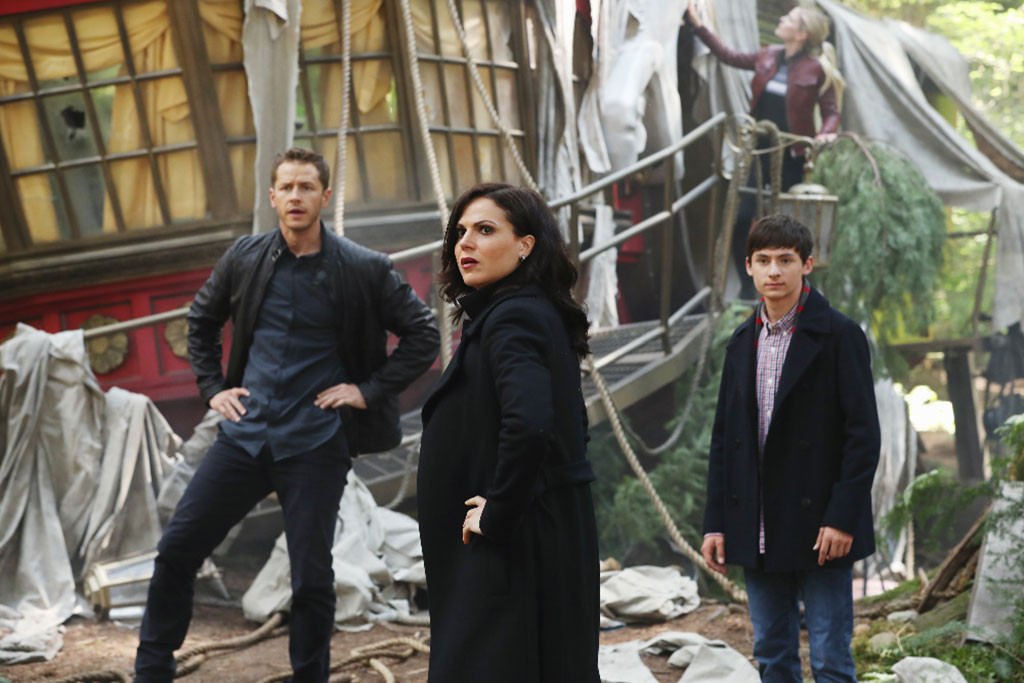 Regina (Lana Parrilla) made huge strides tonight in processing her grief over last season's loss of Robin Hood by choosing to take a leap of faith and believe in the possibility that Hades was lying when he said her beloved's soul was obliterated when he died, keeping him from moving on to a better place. Viewers were clued in to the fact that she's right when one of Robin's arrows drifted down from the sky, something that wasn't revealed to Regina by design. "I think the thing about faith is you have to choose to have it, and if you need proof, you don't really have it," Kitsis said. "And so that was the lesson that she learned in this."

Count on seeing Regina work through her grief as the season progresses. "This was someone who she did love, and who she did lose," Horowitz added. "We hope that we deal with that grief and its aftermath in a real way." 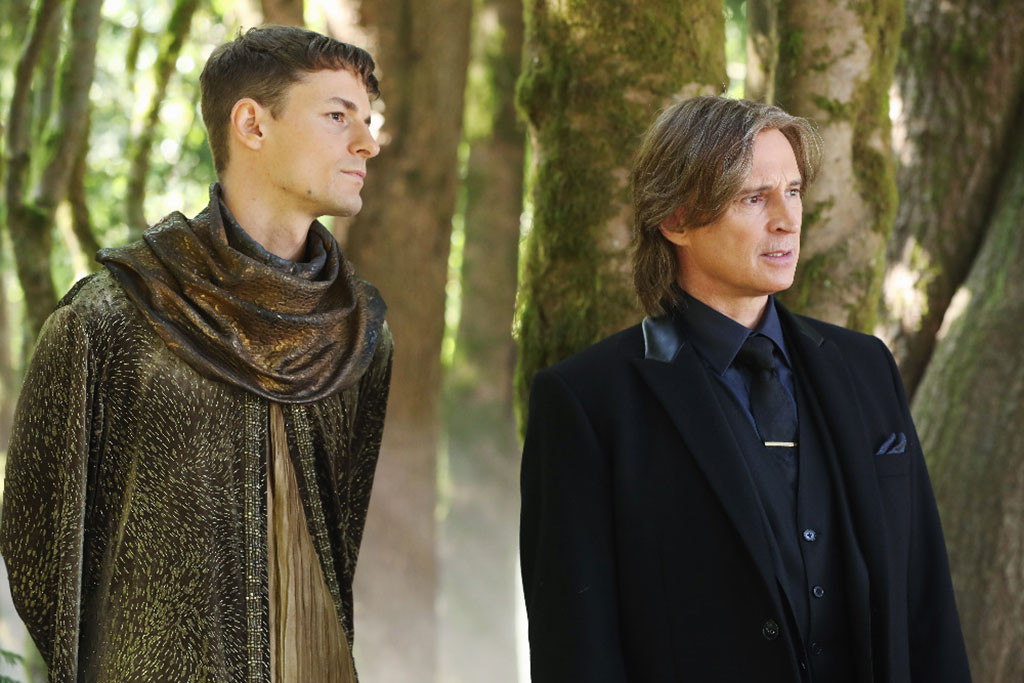 Belle (Emilie De Ravin) finally woke from her self-imposed slumber to keep herself away from Rumple (Robert Carlyle) after receiving true love's kiss. Only, it wasn't Rumple who woke her. It was Morpheus (Giles Matthey), who we learned along with a profoundly stunned Belle and Rumple is  their unborn child all grown up. "Giles, we love him and we think he's great. And yes, we're going to see him again. This was a taste of an introduction," Horowitz explained. "But how we get to that, because she's clearly still pregnant and all that, is a surprise we're going to keep."

As the season progresses, look for Belle's resolve to stay away from Rumple will be challenged. "I think that Belle really, kind of, is in a place where she's given up on Rumple, but they have a child, so that makes things messier because once a child is involved, you actually have to put aside your own feelings and put the child first, no matter how much you hate the other person," Kitsis said. "And that is going to be tested."

As for Rumple, don't expect any big changes out of him. "He truly loves Belle. He truly wants that child. He truly wants to be a good dad, but he is a gangster and he's not giving that life up," Kitsis continued. "That's what he said to her. He's like, 'I like the life. So you either have to realize that this is what I do.' As far as Rumple's concerned, this is art. These deals, and screwing people over, is what he does best." 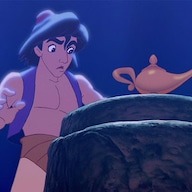 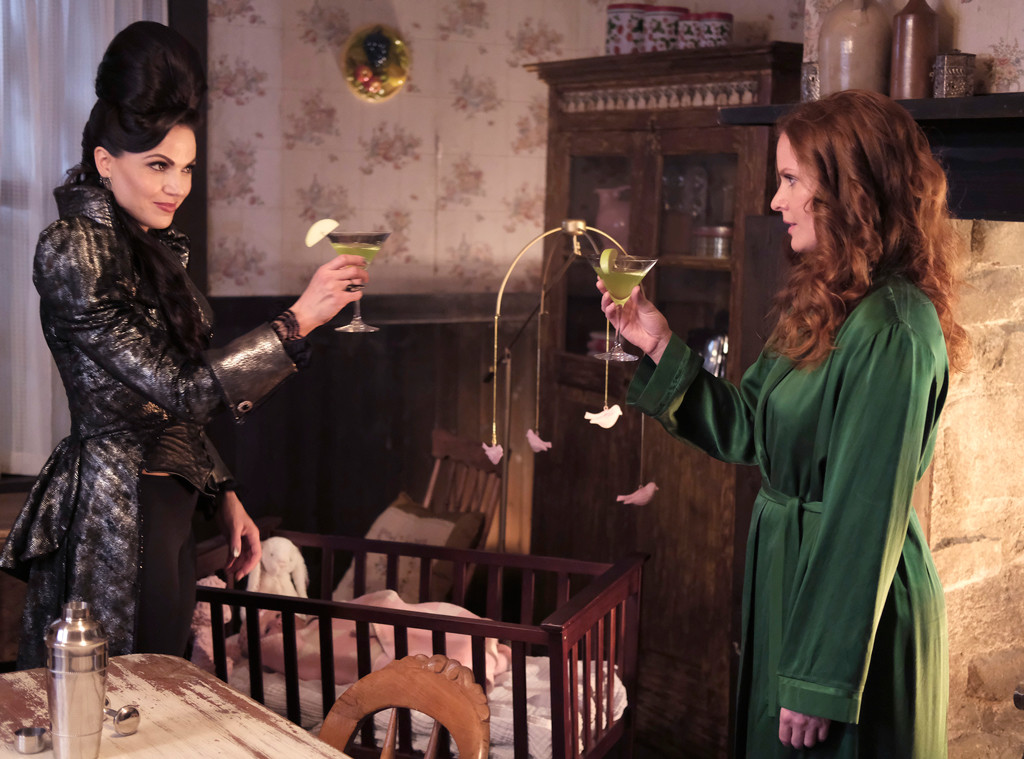 With the Evil Queen's surprise return to Storybrooke after everyone believed her dead, Zelena (Rebecca Mader) will find herself stuck in the middle between two sisters. "I think with Zelena, you know, she's the Wicked Witch. She's pretty wicked, so she's dealing with now she's got a kid and she's got this complicated relationship with Storybrooke in general. There's plenty of people she's killed and who have grudges and all this. And then there's people who are her family," Horowitz explained. So, the Evil Queen coming in is a wild card, and how she reacts to that, we left a little open-ended in this episode intentionally because we really do explore that in the next episode."

With the (admittedly slim) possibility that Emma might die at the hand of her villain, could we be entering Once Upon a Time's twilight phase? Not so fast. "We don't have an end date, but we we have an end plan. Let's put it that way," Horowitz admitted. "We know how we want to end the show when the time comes."

"For us, we're not planning on ending it right now," Kitsis added. "But we'll see what happens."

Once Upon a Time airs Sundays at 8 p.m. on ABC.

TAGS/ Once Upon A Time , TV , Top Stories , Watch With Kristin
GET POP CULTURED!
*Email entered incorrectly. Please try again.
By subscribing to our newsletter you agree to the Privacy Policy and Terms of Use
Daily
Weekly