Kendall Jenner Tells Vogue Her Complicated Feelings About Caitlyn Jenner's Transition: ''You've Got to Move Past It''

Kendall Jenner is still grappling with her father's transition.

In case you missed it, the supermodel landed the cover of Vogue's iconic September issue, and in the story accompanying her stunning photo spread, Kendall gets remarkably candid about Caitlyn Jenner. In the year since the former Olympian sent shock waves through pop culture with her monumental Vanity Fair cover, Kendall says she still experiences painful moments that take her back to her childhood.

"It's super ironic to think about now, but it's something I can thank my dad for: how much of a tomboy I was. That's why I think the whole thing—her transition—was really hard for me, because I was like, ‘But you taught me everything tomboy!'" Kendall recounts.

And although the 20-year-old admits everything is "super normal" and "not weird at all" between her and Caitlyn, she admits, "Sometimes I look at a picture of my dad when she was a guy, and it makes me a little sad—I get emotional," adding, "You have to get past it—you've got a new person to love. It's kind of a blessing in disguise—if that's not the wrong way to say it." 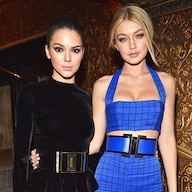 Kendall—who the interviewer points out sometimes mixes up gender pronouns when referring to Caitlyn—says her transition has impacted more than just her life at home with her family. In fact, it's completely shifted the way she sees the world.

"You want to know what's crazy? I want to be careful about how I say this because I don't want it to come off wrong, because I've never said this out loud, but I have recently... even when I say ‘him' or ‘her' about someone who is clearly a guy or clearly a girl—even with my mom—I second-guess it now because of my dad," she explains.

But as everyone else was finding out Caitlyn's identity for the first time, Kendall says her and younger sister Kylie Jenner knew for quite a while. "My whole life we would, like, catch her, and we would be like, 'What is going on here? I think we know, but do we?' At one point Kylie and I thought he was cheating on my mom, because he had makeup and nail polish. One time we found those squishy boob things. We found wigs," Jenner recalls. 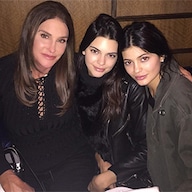 Kendall then goes on to detail one particularly telling run-in with Caitlyn that went completely unmentioned in the years that followed.

"She would wake up really early just so she could dress up and move around the house and get that little kick for the morning, and then go back to being Bruce—take us to school, totally normal," Kendall says.

"So one morning I woke up at 4:00 a.m. so thirsty, came downstairs into the kitchen, and grabbed a bottle of water. And as I was coming back out, my dad was coming down the stairs in, like, a wig and makeup and shoes—the full nine. And she didn't see me. I literally froze. Please don't turn left. Because she could either turn left or turn right. Thank God she turned right and—to this day!—has no idea that happened. That was the first time I had ever seen her," Jenner reveals.

Kendall claims Kris Jenner was fully aware of Caitlyn's behavior behind closed doors, admitting, "My mom knew. She knew since their third date."

Despite the ups and downs that the E! reality star has experienced firsthand, she maintains the importance of acknowledging the bad but focusing on the good.

"We're very accepting of people and of being different and being who you are. We're not judgmental," Kendall says before continuing, "But obviously it's strange having your dad, who was so male, completely reverse. It is definitely a gnarly experience." 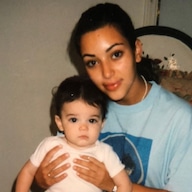