It's not always clear when Jennifer Lawrence is telling the truth.

In fact, when she appeared on NBC's The Tonight Show Monday, Lawrence recalled once lying to a pool of reporters during her first-ever press junket for the 2008 movie The Burning Plain. At the time, director Guillermo Arriaga and co-star Charlize Theron joined the newbie actress at the event. "Kim Basinger wasn't there. We were doing an international press conference and somebody said, 'Where is Kim Basinger?' I just leaned in the microphone and was like, 'You didn't hear? Kim died.' There was like a beat while it got translated and then it was [mayhem]," she said. "I got ripped off the stage and thrown into media training, which is hilarious because I was like Eliza Doolittle in My Fair Lady. They're like, 'Don't sit like that! Don't talk like that!' Ah!"

As an example of her interview style, the X-Men: Apocalypse actress told Jimmy Fallon, "My publicist told me a week ago, 'Stop telling people that they don't have to see X-Men.' I'm always like, 'I don't know. You know, if it feels right. No pressure. See it, don't see it—I don't care.'"

Later in the show, Lawrence and Fallon played "True Confessions" with HBO's John Oliver. "In front of us, we have two envelopes containing confessions," the host explained to his guests. "In one of the envelopes is something that actually happened to us in real life. In the second envelope is a lie. Once you've read your confession, the other two players have 60 seconds to interrogate you and then they each have to guess whether you're lying or telling the truth."

Why Not Lying Landed Jennifer Lawrence in a Tiny Jail

Lawrence opened up her second envelope and read it aloud: "I once took an Ambien before filming a scene in The Hunger Games."

"Was it the scene where you're sleeping in the scene?" Fallon asked.

"Was it a fight scene that you slept through?" Oliver joked.

"I woke up and I took am Ambien; I thought it was something else," Lawrence said.

When the buzzer went off, the other players had to determine whether she was telling the truth. "It's plausible. It's reckless. I kind of like it. If it's not true, I'm going to be very sad. I'm saying it's true," Oliver said. Fallon agreed with Oliver's assessment, telling the Oscar winner, "I'm going to say you're that good of an actor that you can [act on Ambien]...I say it's true."

Next, Fallon opened one of his envelopes. "I once wrote a song called "Am I doing It Wrong?" and offered it free of charge to Paul McCartney," he announced.

"What was Sir Paul's reaction to the offer?" Oliver asked.

"Would you like to hear the song?" Fallon replied.

"I don't doubt that you have a song," Lawrence explained. "How would you get it to Paul McCartney?" Fallon replied, "I'm a giant fan of his and I think we've become kind of friends. It's a one-sided friendship, but I have his cell phone number." Wary, Oliver jokingly told the host, "Now I do want to hear this song, the one-sided friendship song that you threw into his face."

After Fallon performed, he told them, "I left that on his voicemail, free of charge. I have not heard back from Paul." Lawrence then asked, "So you called him? That's the part I don't buy."

Finally, it was Oliver's turn to open an envelope. "As a teenager I had a summer job working n the kitchen at Buckingham Palace," he read. Right away, Lawrence dismissed it was "not true."

"Why would that not be true?" Oliver asked.

"How did you get into the palace?" Lawrence asked. "Where did you park?"

Fallon joked, "Where did you ride your skateboard?"

"I flew in on an umbrella, you racist!" the Brit fired back. "School kids could apply to work in the kitchen and I did that year, so I lived nearby and I walked." Asked to recall his most memorable meal, the Last Week Tonight host said, "I made [Queen Elizabeth II] an omelet for breakfast."

"Bah humbug! No way!" Fallon said. "What kind of omelet?"

"It was a feta cheese omelet," Oliver answered.

"The Queen would not eat feta cheese!" Fallon argued.

"That is true! You're right; she wouldn't eat feta cheese," Oliver said. "It's too Greek!"

To see who lied and who told the truth, watch the video now. 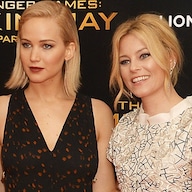