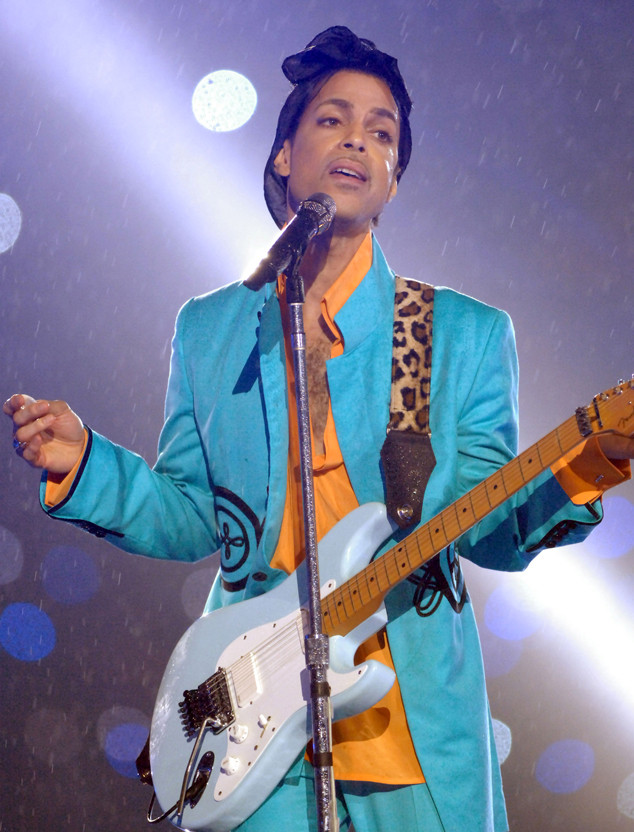 Prince had more accomplishments in his too-short life than we can possibly list off. Grammys. Multi-platinum albums. Singlehandedly bringing raspberry berets and red Corvettes to the forefront of our culture.

So with a life like that, how does one choose a favorite memory? How does one comb through all the amazing concerts, the legendary songs, the completely out-of-this-world, kick-ass fashions to decide how best they'd like to remember an artist? It's easy when that artist has something as memorable and moving as Prince's Super Bowl 41 halftime show.

Let's go back to that day on February 4, 2007. The game, between the Indianapolis Colts and the Chicago Bears, was set to be played at Miami's (outdoor) Sun Life Stadium; a place where the weather is always perfect and ripe for the biggest sports moment of the year, right? Wrong. It was pouring—literally raining cats and dogs.

A less professional (or more diva-esque) artist may have been discourage by this unfortunate turn of events, but not Prince. According to an NFL special on the halftime show, his first reaction was "Can you make it rain harder?" For a little context here, it was the first time in 40 years that it had rained during a Super Bowl. And it never stopped—the audience members that the league brought in to fill the field during the halftime show were soaked, the stage (in the shape of the infamous Prince symbol, of course) was slicker than slick, the cameras were covered in raindrops, and don't even get us started on the multiple electric guitars.

But he rocked. Boy did he ever rock it.

Prince took the stage to the refrain of Queen's "We Will Rock You," before launching into those chill-inducing lyrics "Dearly beloved, we gathered here today to get through this thing called life." And thus our favorite Super Bowl performance began. The man was on fire, mesmerizing an entire stadium full of people (and millions watching at home) with nothing more than two dancers and some guitar riffs—and this is in the day and age of over-the-top theatrics, that's saying something.

The 12-minute set went on to include of course "Let's Go Crazy," "Baby I'm a Star," and a medley of covers that included Creedence Clearwater Revival's "Proud Mary." And then there was the finale: "Purple Rain." Yes, Purple Rain in the rain. It all ended with the audience singing along to the song's final lyrics (or shall we say non-lyrics), and thus a legendary moment was born. Before we say anything else about this magic, you should really watch for yourselves here.

After you've waited for the performance-induced shock to wear off, it's also worth mentioning another reason why this halftime show was so moving—for Prince and for his fans. As is the case with many acts that have been booked for the Super Bowl in recent history, Prince was a little past his prime. His talent never wavered, of course, but his time in the spotlight ebbed and flowed like any celebrity; 2007 was a bit of an ebb. He wasn't in the daily zeitgeist anymore, thanks to a few people we like to call Beyoncé, Justin Timberlake, Fergie...you get the idea.

The Super Bowl was a chance to remind everybody—and by everybody, we mean the younger JT-obsessed generation—who Prince was and why he rocked so damn hard. And rock he did.

TAGS/ Prince , Music , Top Stories
GET POP CULTURED!
*Email entered incorrectly. Please try again.
By subscribing to our newsletter you agree to the Privacy Policy and Terms of Use
Daily
Weekly