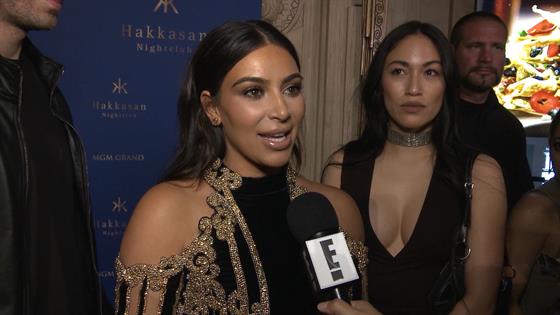 Kim Kardashian partied in Las Vegas Friday, marking her first official club appearance since giving birth to second child Saint West, but the Keeping Up With the Kardashians star almost didn't make it there.

The 35-year-old, who welcomed her and Kanye West's son in December, and her traveling companions, which included Malika Haqq, were delayed for a bit back in Los Angeles when their private plane was grounded due to mechanical problems

Kim was scheduled to host a party at the Hakkasan nightclub to celebrate the venue's third anniversary, featuring music by DJ Ruckus. And she did make it, although she was late.

"Our door wouldn't shut on the plane so it took like a couple hours extra than it was supposed to but we figured it out," Kim told E! News exclusively. "And I was nervous for a little bit that I wouldn't be able to make it in, but it's not that far—we could always drive right? We were going to make it one way or the other."

Kim posted on her Snapchat a video of the captain delivering the grim news about their plane issues.

"Don't worry, we are going to make it to Vegas," she said, sitting inside the jet. "Hakkasan I will not let you down. I will be there and be there on time." 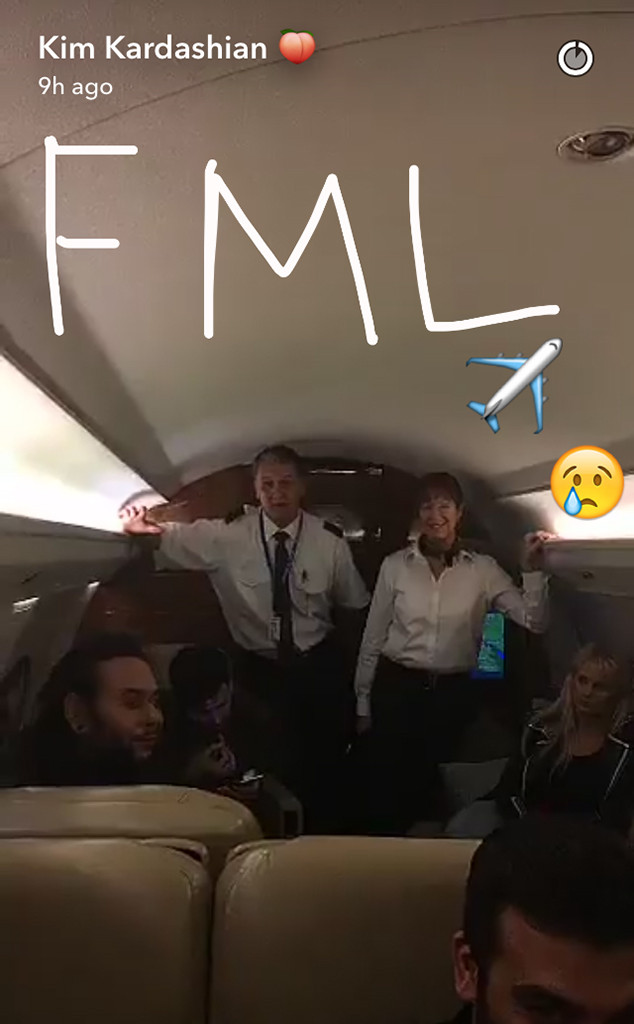 "Does anyone have a plane that they want to lend us?" she added. "I steal Khloe's best friend for the night and this is the bad karma that I get?" 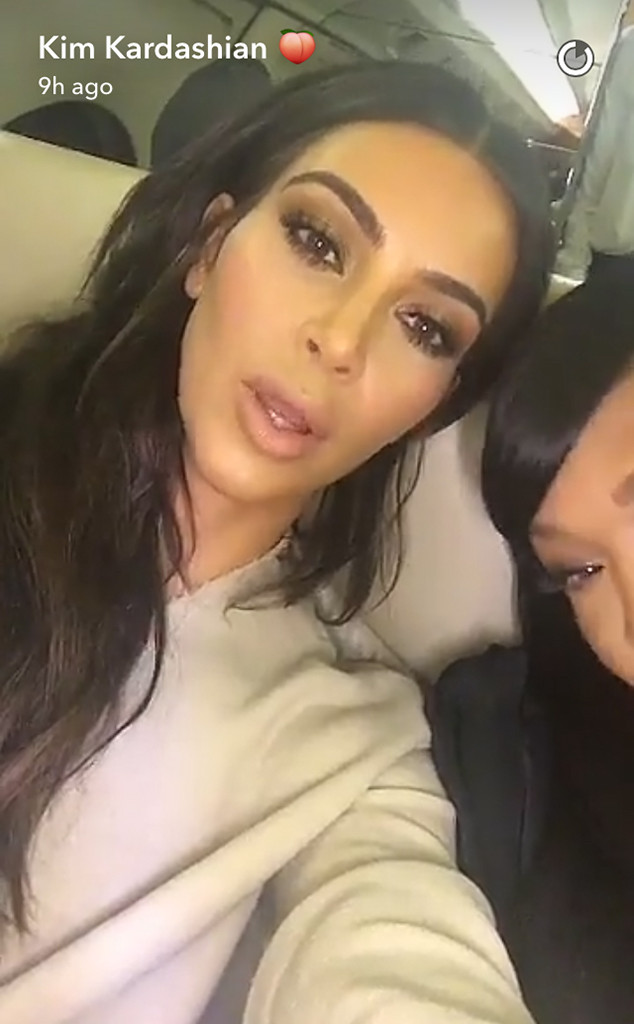 Kim and her friends later boarded another plane and headed on their way. 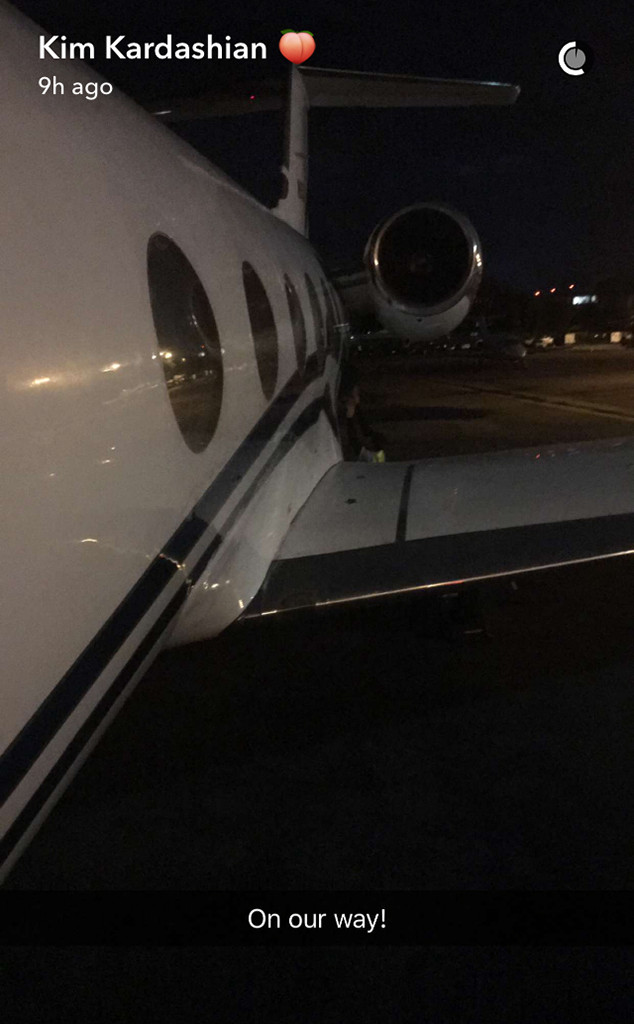 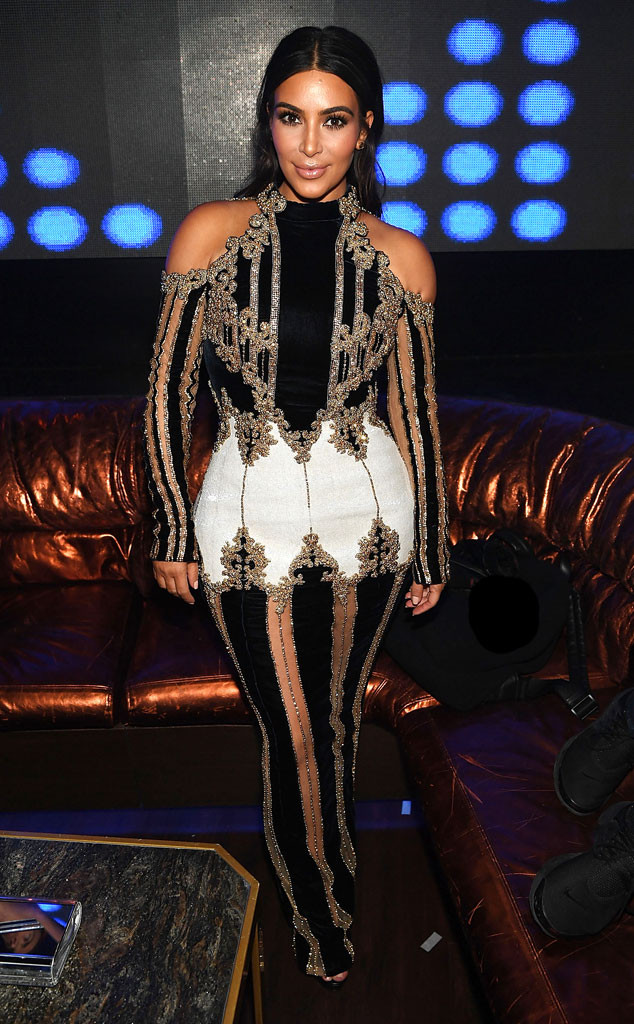 She told E! News she was "anxious to just have a fun night away from the kids with all my friends." Kim has spent most of her time with her husband and children since giving birth to Saint. Earlier this week, she and most of her family jetted off to Colorado for a snow vacation.

"I always encourage my friends that are just having a baby, I'm like, 'Take the time off, don't work don't do anything, just be a mom and spend that family time.' There's nothing better than that," Kim said. "But it does feel good though to have a night off, leave the kids at home, you know I read them their bed time stories, put them in bed and now I'm off to do like fun mom things." 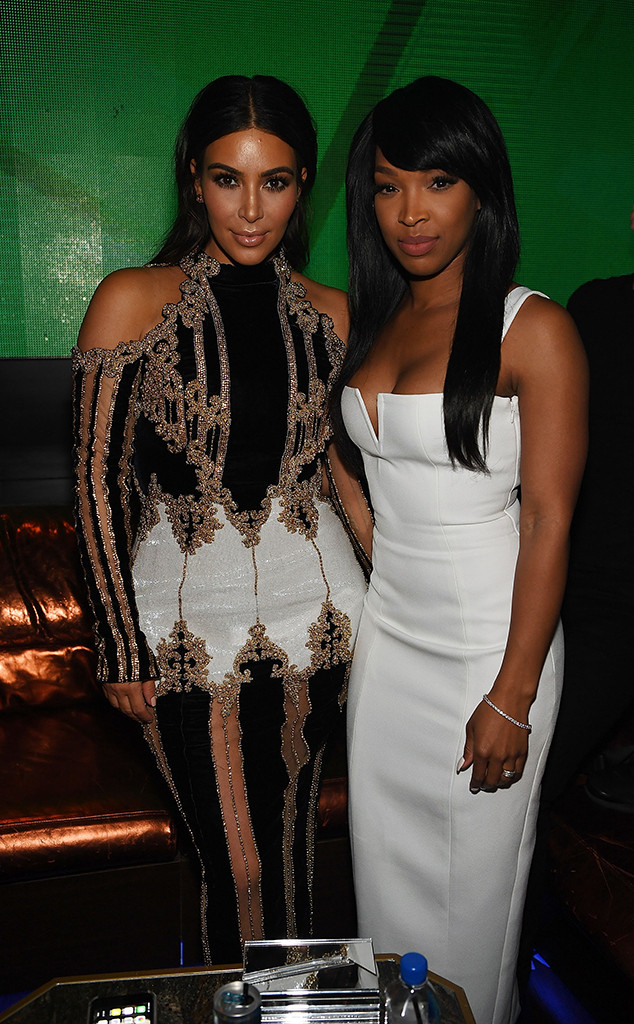 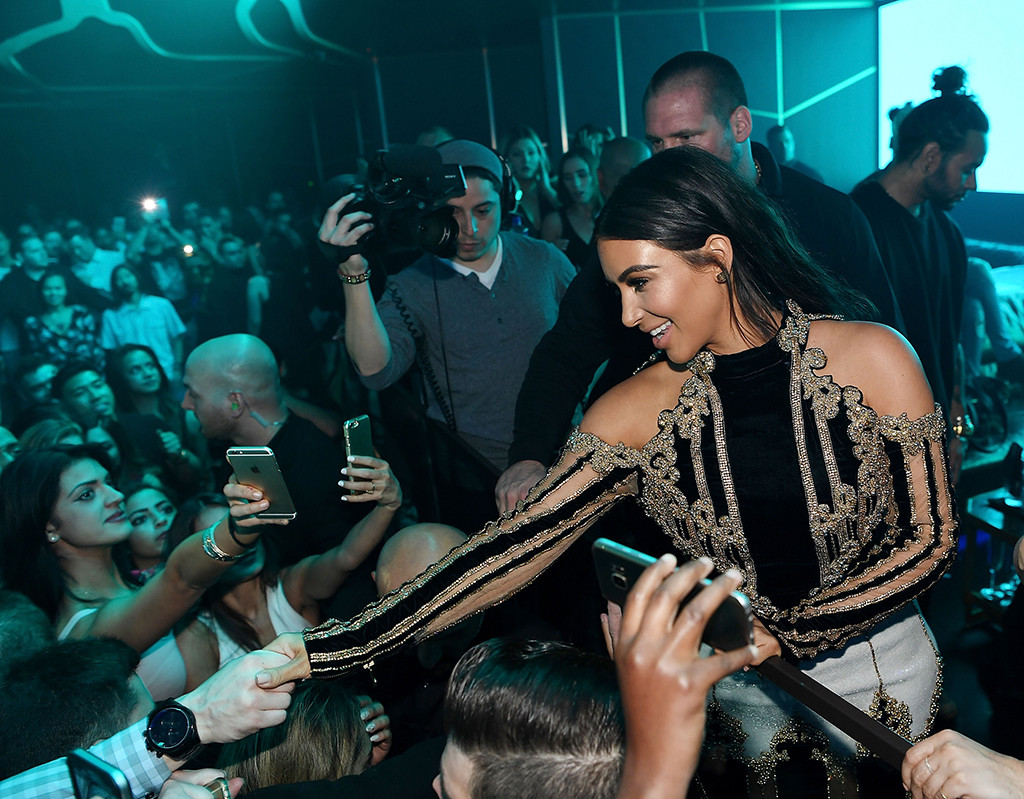 At the club, Kim and her friends sat in a back booth and danced, chatted and took many selfies and other photos with fans throughout the night, E! News has learned.

The reality star took the mic behind the DJ booth and said, "What's up Vegas? We're at one of my favorite spots, Hakkasan, and I am so excited to party with you tonight! So I am excited and you guys have to show me a good time!"

Kim and her friends left the club around 3:10am, after which they hit up a Jack and the Box, where Kim proceed to order...nothing, as seen in another Snapchat video. 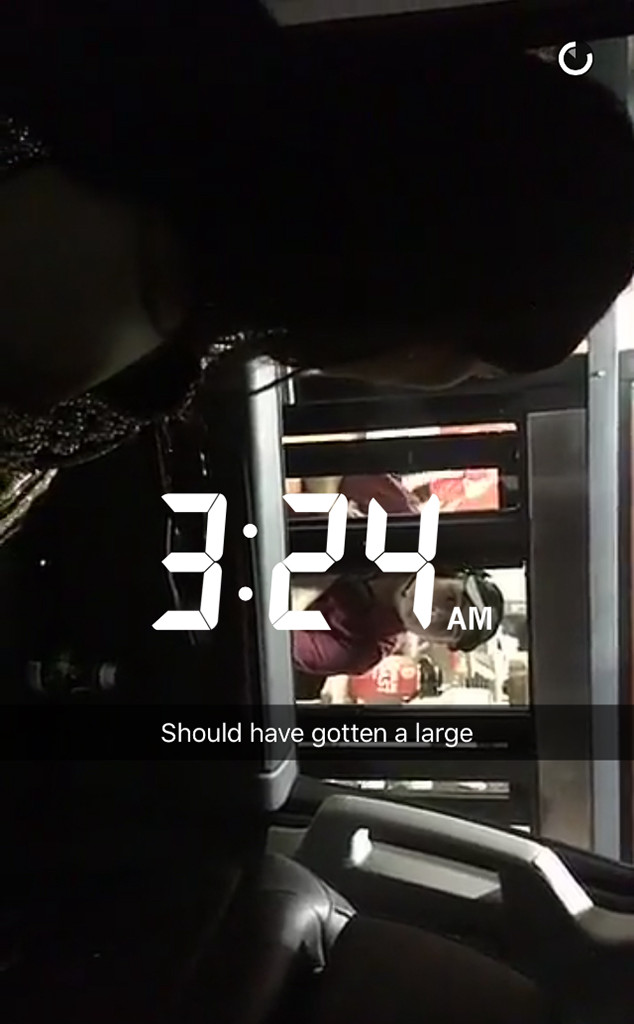 The reality star has been working hard to lose her pregnancy weight. She announced in January she had started the Atkins diet and had become a spokesmodel for the company. She talked to E! News about her weight loss journey and goal.

"Can I add an Oreo milkshake?" Kim was heard saying through the drive-thru microphone. "A small. A regular. It's not for me. It's for my friend. I'm on the Atkins diet." 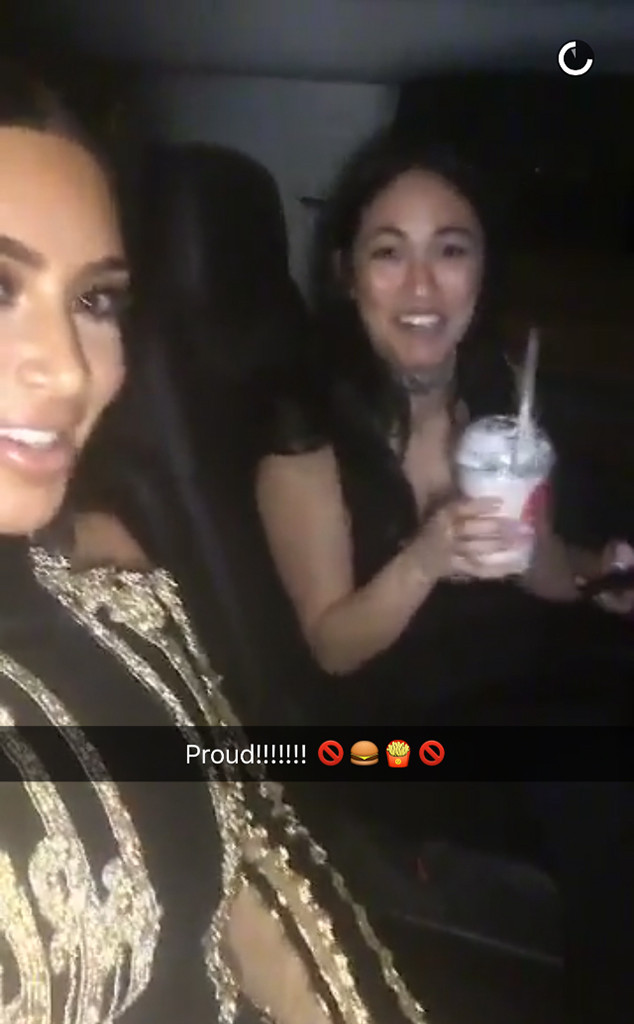 "You guys I did so good," she added. "I didn't order anything at 3:30 in the morning at Jack in the Box, when everyone did, and I am proud."

Watch the season premiere of Keeping Up With the Kardashians on May 1 at 9 p.m. on E! 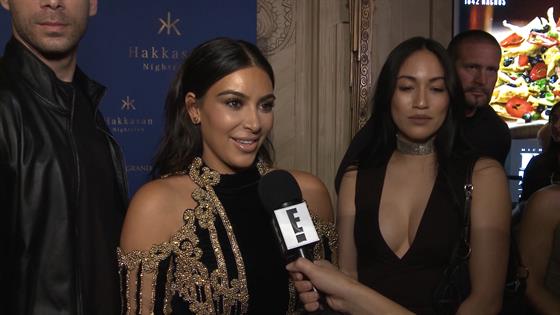