By all accounts, Jennifer Garner was one of the best-dressed stars at the 2016 Oscars. Though she loved her look, she confessed to Jimmy Fallon Wednesday, "That was not easy to wear!"

Garner was a guest on NBC's The Tonight Show, where she explained that getting into her dress was far less glamorous than one might think. "This was Versace, and they made it just for me. Do you know how they make it? See how I have a waist right there? I don't have one in real life anymore," she joked "What they do is they move your organs around. There are basically two men who come in with screwguns, and they screwed me into a metal corset—this isn't true, but it was a metal corset and it did take two Italian people. The next thing you know, my ribs were compressed."

"No, dude! It's not like that. It's so intense!" the Miracales From Heaven actress, 43, told him. "It's very intense. It's not like Scarlet O'Hara. There's metal inside and these people just kind of move your ribs and they move your liver out of the side and they pop you in. To keep you in place, you step into a bodysuit first, which is like the bottom of a leotard, but it's a thong."

PHOTOS: Inside the 2016 Oscars parties

Garner attended the event with one of her "best girlfriends," as she's done many times before. While sitting in the audience, her muscles started to spasm. "I said, 'I'm going to have to stand up. I can't breathe. I'm going to have to stand up.' And she said, 'If you stand up, they'll think you're Kanye West. They're going to think you're protesting. You can't stand up! You have to sit down,'" she recalled. "I'm trying to get comfortable...we're laughing, and that makes it worse."

"Finally, there was a blessed commercial break and I could kind of teeter this whole dress to the backstage. Well, we stood backstage for a while and I calmed down, and then I realized I had to go to the bathroom. I don't know if you've ever gotten married and you've been in there with your bridesmaids in the wedding gown—it's a thing, OK? We understand, right ladies? We go into the bathroom because she's going to have to hold something up," explained Garner, who at the time was unaware Isla Fisher was in the bathroom gluing a beard to Sacha Baron Cohen's face for his bit as Ali G. "It's not pretty...It's worse than a toddler in a snowsuit because of the bodysuit. Do you see what I'm saying? The connection of the bodysuit, because it had a hook and eye situation, was in an intimate position," Garner said. "I was like in my vageen, OK?" 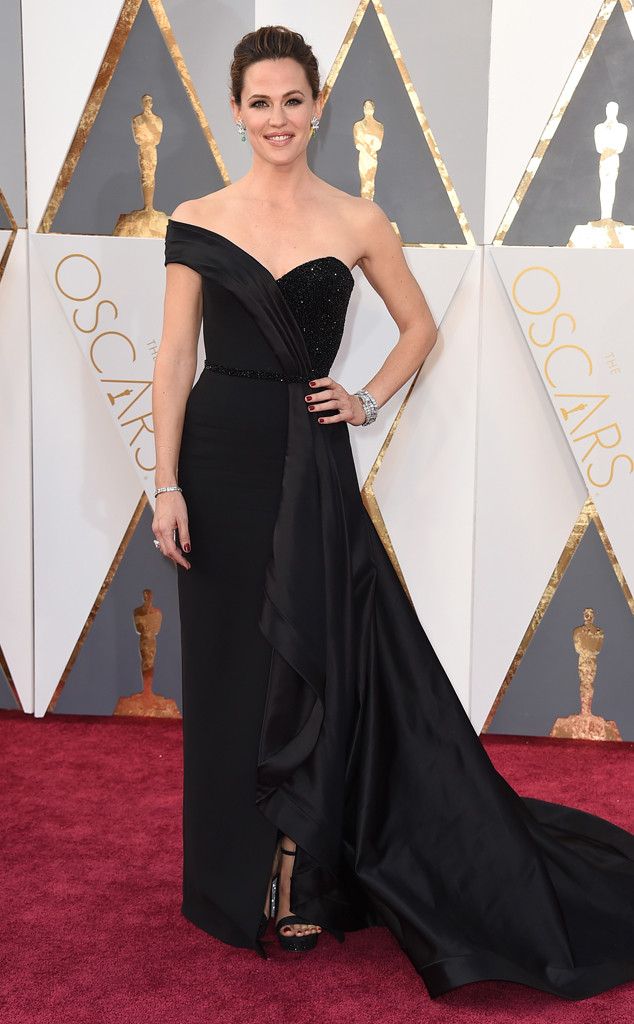 When Fallon squirmed, Garner said, "Jimmy, you're a grown-up here!"

"Eventually it worked out, and I'm going to get those ribs removed anyway," she joked.

PHOTOS: What the stars wore to the 2016 Oscars

TAGS/ Jennifer Garner , The Tonight Show , 2016 Oscars , Celebrities , Top Stories
GET POP CULTURED!
*Email entered incorrectly. Please try again.
By subscribing to our newsletter you agree to the Privacy Policy and Terms of Use
Daily
Weekly