Kesha was moved to tears Saturday while accepting an award for her support for the LGBT community, citing "personal things" she is dealing with amid her sexual assault case against her former music producer.

In 2014, the 29-year-old pop singer sued Dr. Luke, claiming sexual assault and battery and seeking to invalidate recording contracts she had signed with him. He filed a countersuit, calling her allegations "defamatory" and saying he was being extorted. Last month, a judge denied Kesha's request for a preliminary injunction that would have allowed her to release music outside of Dr. Luke's authority. Her supporters, including celebs, have rallied behind her since the lawsuit was filed, calling to "Free Kesha."

"I love writing songs and I love making music but this is like the most rewarding part of the entire process for me," Kesha said in her speech. "I'm going through some personal things that have been really intense and hard lately and I just want to say thank you for any support I've received. My mom's crying - stop crying! stop crying."

READ: Kesha sues producer Dr. Luke for sexual assault and battery, claims he drugged her and called her fat 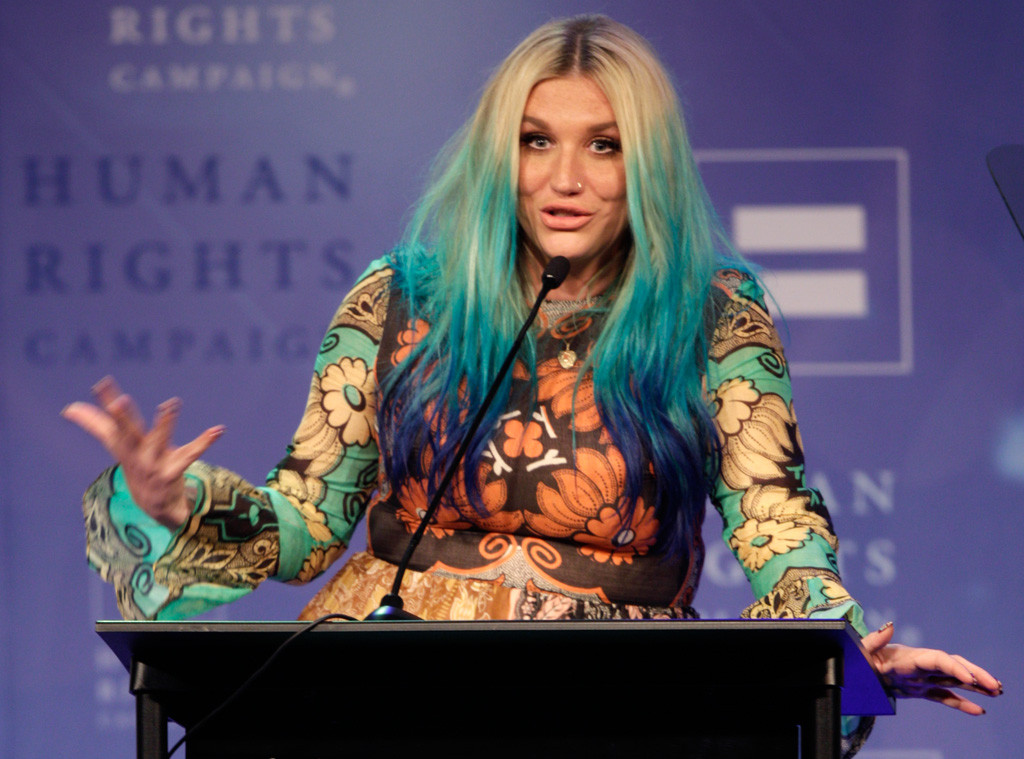 The singer said she has a "very deep connection to the LGBT communities" since she was a young girl growing up in Nashville, when she felt like a "misfit" and hung out with "other social outsiders, many of them in the LGBT community."

"Though back then we didn't know what LGBT meant," she said. "We just knew we got bullied for being ourselves, shamed for being different and encouraged to hide the things that made us unique. Music was my outlet. I started writing songs and recording my own songs, songs about everyone celebrating themselves and trying to find a rock n' roll paradise."

Kesha said after she became famous, she still felt like an "outsider" and recalls how she was criticized for "acting like myself."

"It's really hard to have confidence in yourself and love yourself when the world criticizes you for being yourself," she said, her voice wavering. And obviously, there's so many other people who've had it so much harder than me. I've met many members of the LGBT community and some very, very close friends who have come close to taking their own lives because of the abuse they've had to deal with and that is heartbreaking. I don't want to live in a world where we treat each other like that."

READ: Kesha cries in court as she is denied request to release music without Dr. Luke amid sexual assault lawsuit

Kesha said she is encouraged by the progress made for LGBT rights and equality.

"I've said for years I'm not getting married until any two people in this country can get married. So thank f--king God we finally crossed that bridge. It took long enough."

"I remember that morning, I woke up and like, was jumping on the bed like a maniac, like it was Christmas morning and like screaming and the people from the hotel were called and it was like a whole thing 'cause I was, they thought I was like, partying. Which I kind of was," Kesha said in her speech. "But it was like a very big moment!"

Kesha said her message was, "Don't be afraid to speak up against any injustice you experience."

"Don't let people scare and shame you into changing the things about yourself that make you unique," she said. "Those are the qualities that will make your life magical and special. Never deny yourself that."

"We can't be afraid to fight for our own dignity," she continued. "These are our basic human rights. As a generation, a unified voice fighting for equality, we have the power and we can force change. You are all beautiful just as you are and you have my love and my support until the day I die. Thank you for the award."

TAGS/ Kesha , LGBTQ , Top Stories
GET POP CULTURED!
*Email entered incorrectly. Please try again.
By subscribing to our newsletter you agree to the Privacy Policy and Terms of Use
Daily
Weekly