Now that the 2016 Super Bowl has come to a close, here's your chance to relive or catch up on all  of the highly-anticipated commercials released during the big game.

The commercials, of course, are always one of the biggest attractions of the day—some people only watch the game for that very reason! In fact, they're so popular that the average cost of a 30-second slot soared to about $5 million this year (up 11% from last year, according to Business Insider). This year's broadcaster, CBS, says the last remaining spot could even go for somewhere around $6 million.

But will the 2016 commercials surpass some of the previous years' ads in terms of viewer popularity? Well, with faces like Ryan Reynolds starring in one and Seal's voice serenading us in others—both of their ads were released on Monday—it's safe to say things are looking good.

Check out all of the Super Bowl 2016 commercials below:

What's more popular than drones and man buns? This highly anticipated ad has the answers.

This commercial debunks the myth that razors are too pricey.

Jack in the Box's "Declaration of Delicious"

This commercial gets right to the heart of what it means to drive a Jeep, wilderness and all.

Ever wondered what that inanimate object that removes hair and sits in your bathroom does when you're not looking? Turns out, its a robot after all!

Budweiser's "Not Backing Down"

Simply put, this rugged commercial describes everything Budweiser is not.

According to this commercial, the Fitbit Blaze is the only fitness tracker that allows you to go from a sweaty gym to a fancy gala in style.

How does the candy bar define bold? Let's just say it has something to do with jumping out of a plane while riding a bull.

In this commercial, a trio of relentless pups will do anything to snag a bag of Doritos.

While you may think celebrity endorsements for big brands is a form of "selling out," the Silence of the Lambs star is here to explain otherwise.

The Marvel super heroes join forces to enjoy the the latest iteration of the bubbly, brown beverage.

This commercial puts Persil to the test against the nation's top laundry detergents, and the results night surprise you.

Introducing the all-new 2016 Toyota Prius, this high-speed ad focuses on a getaway in style and luxury.

In a play on his Miss Universe fumble, Harvey schools a competing cellphone carrier.

The comedian takes on Colonel Sanders in this commercial advertising a new flavor of KFC's famous fried chicken.

The Terminator star is back to blow things up and look really cool doing for the action-packed video game.

Marmot's "Love the Outside"

The outdoor apparel brand debuts their adorable new mascot in this silly commercial.

As this commercial hopes to prove, it's never to early to feed a craving for the cheesy chip.

Apartments.com's "Movin' on Up" with Jeff Goldblum and Lil' Wayne

This particular high-rise apartment building offers quite a cast of potential neighbors, including George Washington.

WTF?! This extremely original (to say the least) ad speaks for itself.

Leave it to Baldwin to throw a killer Super Bowl celebration with a little extra help from Amazon's new cloud-based voice service.

Pepsi's "The Joy of Pepsi" With Janelle Monáe

The pop-inspired commercial by the Super Bowl's major sponsor shows Janelle Monáe dancing her way through 50 years of Pepsi and will likely be shown right before the halftime show.

NO MORE delivers a public awareness message in their commercial designed to engage bystanders around ending domestic violence and sexual assault.

The light beer's Super Bowl add puts fitness at the forefront with the theme that it's "brewed for those who go the extra mile."

In honor of their onUp Movement, SunTrust encourages Americans to move from financial stress to financial confidence, helping the country "catch its breath" again.

In their very first Super Bowl ad (crazy, right?), PayPal brings a hip, young vibe with a spot about how they are the "future" of money.

The emotional commercial serves to drive home the importance of "Made In America" products, including their custom automobile floor mats.

The famous comedians join in on the fun with an advertisement featuring the two playing pals who have big aspirations to become the world's next most famous sportscasters. Fans of the former Comedy Central stars will be sure to enjoy the Super Bowl commercial.

This funny ad shows the great lengths dads will go in protecting their daughters. Hart tracks his little girl on a first date using his smart watch's Car Finder app.

Audi's cute commercial tells the story of a retired astronaut who rediscovers his lust for life with the new R8.

For their Super Bowl spot, Snickers features Willem DaFoe as a grumpy Marilyn Monroe, imagining her hungry while filming The Seven Year Itch in 1955 and going with their theme of "you're not you when you're hungry."

Adobe encourages people not to gamble with their marketing strategies when the stakes are high, using silly Super Bowl commercials as an example.

Honda makes us giggle as they feature a bunch of sheep singing "Somebody to Love" in honor of their new Ridgeline truck.

The ad features none other than Oscar-winning actress Helen Mirren advising consumers to avoid drinking and driving, but with a flair that only the British star could pull off. As part of the company's #GiveADamn campaign, Mirren is shown telling the camera, "If you drive drunk, you—simply put— are a shortsighted, utterly useless, oxygen-wasting human form of pollution, a Darwin award-deserving selfish coward." Budweiser is donating $1 for every post for safe ride programs, up to $1 million total.

While driving in their 2017 Hyundai Elantra, two women become distracted by the fact that every man they pass—from police officers to construction workers to a group playing football—is the always-handsome Ryan Reynolds.  Luckily, "the car that doesn't get distracted," warns them before they almost run into another version of Reynolds crossing the street with a slew of puppies.

In this silly commercial, Seal's "Kiss From a Rose" gets an update with different groups of "Super Bowl Babies," aka people who may have been conceived the night of the big game in years past. An opening title card explains, "Data suggests nine months after a Super Bowl victory, winning cities see a rise in births. They're called Super Bowl Babies." The groups go on to sing alongside Seal about their conception in various football cities that rep teams like the Packers, the Patriots, the Cowboys and more.

T-Mobile's "You Got Carriered" Featuring Drake

T-Mobile shows how phone carrier services "ruin everything" by attempting to put a corporate twist on Drake's "Hotline Bling." The rapper makes us giggle with his sarcastic response.

Acura's "What He Said"

In order to introduce Acura's new NSX, the commercial features Van Halen's "Runnin' With the Devil" and shows the car's creation from start to finish. Definitely something that will catch any car enthusiast's attention!

Avocados From Mexico's "Avocados in Space"

A group of aliens in outer space take a tour of a museum filled with things from earth, including Scott Baio, Emoji's and avocados from Mexico that are in-season all year long.

The commercial for the men's grooming goods encourages all dudes to embrace what makes the unique—whether it be their nose, their love for kittens or their wardrobe.

Colgate encourages people to turn off their faucets while brushing their teeth, revealing the statistic that doing so will save somewhere near 4 gallons of water per brush.

This adorable commercial pulls at all our heartstrings as a bunch of Dachshund puppies in hot dog costumes race toward their owners who are, appropriately, wearing condiment ensembles.

Another spot for their new Elanta, Hyundai reveals the importance of their remote start system—which can be used by talking into your smart watch—as two people escape a couple of hungry bears while running through a forest. (Fun fact: the bears can talk, too!)

With the help of Christopher Walken's dead-pan stare, Kia encourages people to step away from the "beige socks" of the world and make a statement!

LG's "The Man From the Future" Starring Liam Neeson

Liam Neeson explains to a young prodigy how the "future must be protected," advertising LG's new OLED televisions that will "change everything."

Mini's commercial enlists a group of famous faces, including: Serena Williams, Abby Wambach, Tony Hawk, T-Pain, Randy Johnson, Harvey Keitel and more. It encourages the message that no one can define what or who you are.

In honor of its 20th anniversary, Pokémon's first-ever Super Bowl commercial comes with a "you can do it" attitude, featuring athletes, chess players and, of course, gamers.

Quicken Loans' "What We Were Thinking"

Quicken Loans seeks to make home-buying easier for consumers through their new Rocket Mortgage program, which "makes an intimidating process an easy one" by bringing it directly to our phones.

Lender brand SoFi asks people to seek out their greatness, classifying different people throughout the commercial as "great" or "not great," of course with a sarcastic and silly twist. 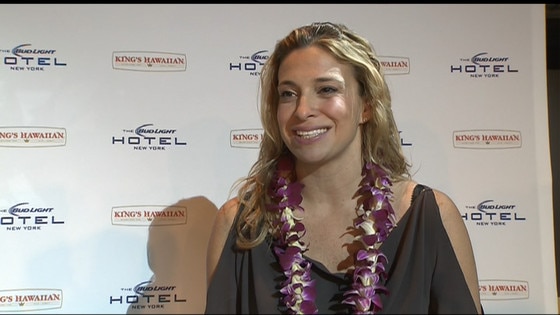