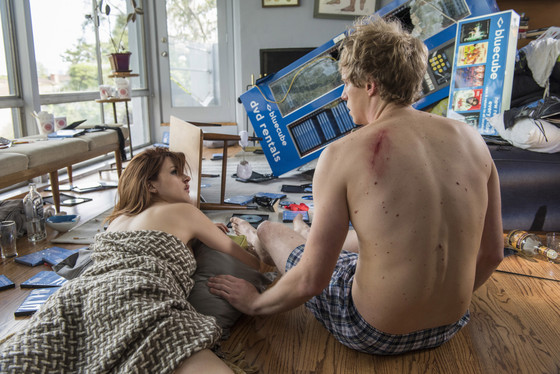 For a show claiming to be about some of the worst people, You're the Worst sure does bring out a whole lot of the best feelings.

A typical episode makes us laugh, makes us smile, makes us want to hug something, and makes us cry serious tears into the Bloody Marys we wish we had.

Tonight was absolutely no different in that sense, but it was very different in another sense, and that all had to do with the reveal of why Gretchen (Aya Cash) has been sneaking out of her house and away from the bed she shares with boyfriend Jimmy (Chris Geere) to cry in her car.

This show has always felt weirdly real—especially for any young people living in Los Angeles (and extra especially if they have ever attempted improv)—but tonight's episode, "There is Not Currently a Problem," took things to a whole new level as Gretchen revealed to Jimmy that she's clinically depressed.

We are absolutely not exaggerating here when we say that we sobbed at Lindsay and Gretchen's little moment in a way TV hasn't made us sob in a long time, or possibly ever. TV has dealt with depression before, but rarely in a way that doesn't feel like one of those Very Special Episodes, and never before with a character as ridiculous as Lindsay playing the voice of reason and comfort.

CLICK: Our favorite lines from the You're the Worst premiere

"Wear your stains on the outside of your clothes," she told her friend, right after revealing that she likes to drink soy sauce and once gave oral sex to Malcolm Jamal Warner.

As we laugh-cried at Lindsay's incredible ability to be both a hot mess and a loyal friend at the same time, we were also weirdly struck by how we have, at some point or another, been everyone on this show, from the outsider Dorothy just trying to be liked to best friend Lindsay with the responsibility of finding the right thing to say when that right thing might not actually exist.

We've been Jimmy, suddenly learning of a problem you care so much about but can't fix, and we've been Gretchen, curled up on the bed and crying about everything that's wrong with us. (We have never been Vernon, but we're OK with that.)

We've also been Jimmy on the hunt for an elusive rodent, but that is a story for another time.

Basically what we're saying here is that we appreciate it so, so much when a show takes the time to realistically portray real moments like tonight's episode did, and like every episode of this show does, and if you're not watching, then just know that there is something truly beautiful missing from your life.

PHOTOS: Which shows have been picked up and which have been canceled this season?

TAGS/ Fx , TV , Top Stories
GET POP CULTURED!
*Email entered incorrectly. Please try again.
By subscribing to our newsletter you agree to the Privacy Policy and Terms of Use
Daily
Weekly