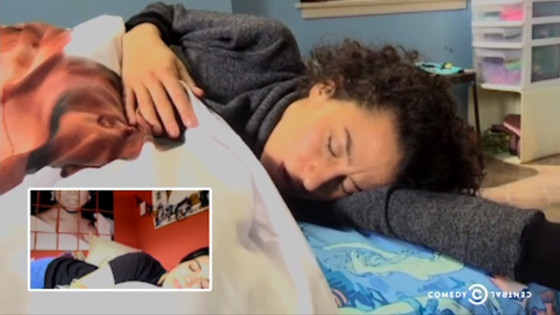 Tonight at sunset marks the beginning of Yom Kippur, considered the holiest day of the year for the Jewish people and the end of the 10 High Holy Days marking the Jewish new year, and Ilana Glazer and Abbi Jacobson understand how hungry those who choose to observe the traditional fast are going to get before sundown tomorrow.

In the first episode of the new digital series Hack Into Broad City, first obtained by EW.com, the Broad City stars are FaceTiming on Yom Kippur and they've got four hours till their break-the-fast feast. Or breakfast sandwiches.

"We can do this, we carbo-loaded last night. Let's go!" Abbi insists in the main screen, as an obviously distressed Ilana withers away in the foreground, both of them lying in bed to conserve their energy.

"I don't get Yom Kippur, it sucks," Ilana groans. Abbi agrees, adding, "It's like, how is me waiting till the sun sets to eat this bacon-egg-and-cheese going to cancel out the time I laughed in that hot dude's face about his weird-shaped nipples mid-coitus...It's not!"

"I am starving!" they say in unison, to which Ilana quips, "Jinx."

Memo to those who plan on embarking on the fast starting Tuesday at sunset—probably not a great idea to actually have your tantalizing breakfast sandwich sitting right there next to you while you're complaining about being hungry. Best to just take a walk or read a book.

Also, definitely watch Abbi and Ilana discuss the sort of topics that aren't mentioned aloud at synagogue—but before you watch, guess who sneaks food first! (They always have next year to repent for that.)

Here are more Yom Kippur well-wishes (and jokes probably meant to distract from imminent hunger) making the rounds—and happy new year to all who celebrate!

Wishing all of our friends a reflective and meaningful Yom Kippur! pic.twitter.com/7lEwfMgTHx

Ooof, Azealia Banks is lucky Yom Kippur is coming up.

To all those observing Yom Kippur in NY and around the world, best wishes for an easy fast.

Just returned from Israel...Wishing all who observe, an easy fast & a day of peace, this Yom Kippur. G-d Bless.

Teresa & I extend best wishes to Jewish communities around the world on the occasion of Yom Kippur, conclusion of High Holidays. Tzom Kal!

Almost the start of Yom Kippur. I can't remember - are we not supposed to eat or tweet? I'm only giving up one of those things.

.@chirlane and I wish all those observing a meaningful Yom Kippur and easy fast.

On behalf of all NY'ers, I extend warm wishes for a meaningful day of prayer & contemplation and an easy fast to those observing Yom Kippur.

I'm off until Thursday for Yom Kippur. See you on the other side of the fast .. and the Pope's visit.

Wishing everyone an easy fast and an enlightening atonement on Yom Kippur.

I'd like to wish those in #Toronto observing #yomkippur a good fast and a happy, healthy & peaceful year. G'mar Tov #topoli

TAGS/ Religion , Holidays , TV , Funny , Top Stories
GET POP CULTURED!
*Email entered incorrectly. Please try again.
By subscribing to our newsletter you agree to the Privacy Policy and Terms of Use
Daily
Weekly