The Voice Is Back For Season 9 With a Ton of Talented Contestants—Who's Your Early Favorite? 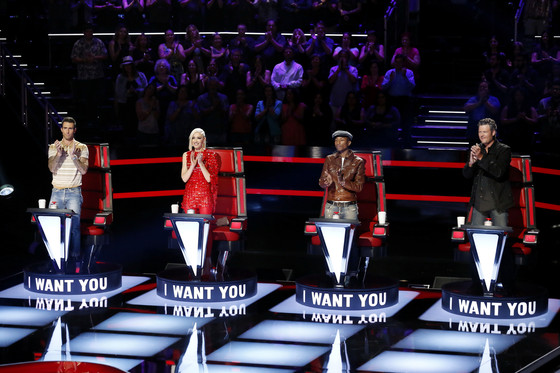 The Voice is back! Adam Levine, Blake Shelton, Gwen Stefani and Pharrell Williams have all returned as coaches, and they heard some crazy good contestants in the two-hour season nine premiere. Who joined their teams? Let's get right to it and go through the night's auditionees:

Of course the season would kick off with a four-chair turn—and a deserving one, at that. This pastor's son was so filled with joy when the first two chairs turned (Adam and Pharrell, in case you were wondering) that it was amazing he didn't fall off the stage from shock when Blake and Gwen turned, too. Can't wait to see what he does in the battle rounds! Oh, also, being a dead body on a crime show is kind of a TV fan's ultimate dream. Yes, we are most definitely jealous.

This rocker chick's parents are probably the coolest ever—not only have they unquestionably supported their daughter's dreams of rock stardom, they actually opened a music venue in LA so she could have somewhere to play. After Gwen, Pharrell and Blake turned for her, it was no surprise that she picked the woman she's idolized since she was a kid. They're definitely a good fit. 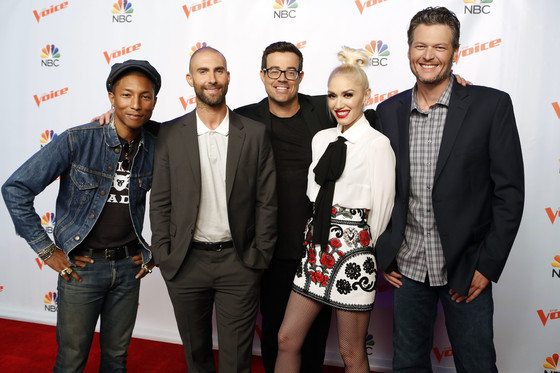 The guy's got a great voice, but everything from his hairstyle to his song choice—Bryan Adams, really?—felt a little dated. Still, Adam and Gwen both recognized his talent and dropped as many Bono-related connections as they could to get him on their team. Ultimately, the family man (super cute wife and baby? Check!) picked Adam.

Talk about the sob story to end all sob stories! This gorgeous teenager's stepfather, who helped raise her, was killed disarming a bomb in Iraq just months before her little sister was born. She had put off nursing school to audition for The Voice, but no coach took the bait. They told her she needed practice, and they were right. Girlfriend isn't quite ready for this, but she has plenty of potential. If she takes some formal music lessons and gets more experience, she could totally be a success story in a future season.

This is kind of why the blind auditions exist, right? Looks like a young girl, sounds like someone way more mature than her 15 years. Gotta say—it was kind of uncomfortable to hear her sing the lyrics to "Fever," but there's no doubt she's got the goods. Hopefully she'll be able to bring her soulful sound to some slightly more appropriate song choices in future weeks on Team Pharrell (who beat out Gwen and Blake).

Frankly, it was weird that it took nine seasons for the show to edit an audition so the audience would experience it blind, from the coaches' point of view. From the get-go, it was clear the (uber-talented) person singing was a man with a really interesting voice, but the coaches all lost their minds when they saw it was an overweight dude with glasses and a cardigan and not the person they thought it would be. "I think you're the most important person who's ever been on this show," Adam told the small-town church singer. He did have an inspiring story, but that feels a little hyperbolic, no? Not that this guy doesn't have a heck of a lot of talent, but his story didn't feel all that different from many other people we've seen on the show before. That also doesn't diminish anything he's had to overcome—he's certainly brave, but the most important person ever? Hmmm.

The great thing about The Voice is that they don't do joke auditions. So while this country grandpa isn't necessarily someone you'd see making it on another singing competition, it wasn't at all cringeworthy to watch. When no one turned, Blake told Paul it was because he could hear the elder singer dropping phrases and going flat, and it was true—he was not outstanding, but he was fun to watch. Good job, Dr. Paul! Hopefully this'll get you some more local gigs.

CLICK: The Voice returns! What to expect from season nine 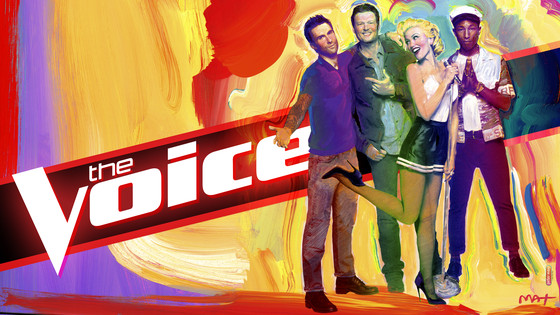 This young mom, who won at the Apollo at age 16, got both Blake and Adam to turn with her on-point rendition of "Tightrope." But then she picked Blake. Ummmm, what? That feels like a major mis-match.

Yes, that is his real name. The polished teen singer has been in a band since age 9, but's ready to break out. Pharrell and Gwen both turned at the last second for him, and, after what Blake described as a "custody battle," he went with Gwen. That was probably the right decision.

Yes, this good-looking guy's dad is Chuck Woolery, who came to the audition in support of his son. But he also has a back story that should've gotten him on the show anyway: He was a skier whose Olympic dreams were dashed by a career-ending injury, so he turned to music. His audition wasn't great, but it felt like that was totally due to inexperience. If he gets some formal music education, it feels like he could totally improve. But right now, he's definitely a surfer bro who can do an adequate John Mayer rendition at the bonfire.

The editors saved this four-chair turn for last. This high school drama teacher/dad/husband survived a deadly plane crash as a kid totally crushed "Angel Eyes," leading to another four-chair turn and intense coaches' battle. He picked Blake, as he should've.

What did you think of the latest Voice contestants? Who was your favorite? Leave your picks in the comments! 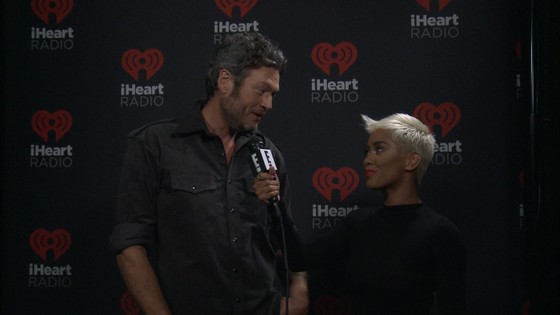 Now Playing
Up Next
Blake Shelton Makes Out With Adam Levine?!