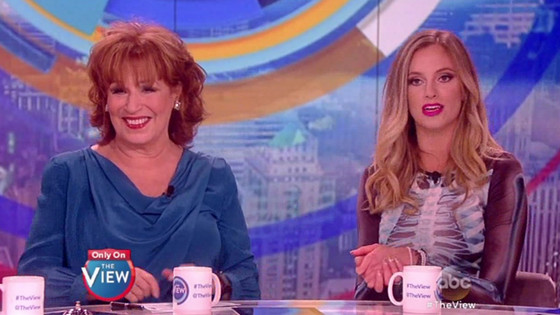 The tables have turned once again. In fact, we're getting dizzy at this point.

Nicole Arbour, the YouTube sensation under fire for her "Dear Fat People" viral video, is throwing The View's panelists under the bus after supposedly overhearing even more controversial comments made by them during the taping of the show.

When Arbour joined the ladies of the round table on Wednesday to discuss the backlash she's been facing for her own notorious video, she says after the fact that she was in the perfect place for even more juicy content when the cameras turned off. While backstage, she says she overheard the ladies, particularly co-host Michelle Collins, reacting to the comments they had just made about Miss America contestant Kelley Johnson and the monologue about nursing she performed for the talent competition.

Arbour recalled the entire serendipitous ordeal during an appearance on Opie and Jim Norton on SiriusXM.

"Backstage, I heard the girls being like 'Oh yeah, our nurse jokes didn't go over well so we have to apologize because they're tweeting us too much,'" Arbour told the radio hosts. "And I'm like, 'you all are pussies.' See, I can sit in my jokes and be like, yeah, I made them, I think it's funny. Whatever. But they go on there and make a fake apology. When the cameras weren't rolling, Michelle was like 'Yeah, that's not a real profession. They want to be doctors.'"

VIDEO: Watch the clip that caused all the backlash

If true, the private comments Arbour claims to have heard starkly contrasted with the public apologies both Collins and Joy Behar offered to the nurses who were offended by Friday's episode of The View.

In an effort to make amends, the group of women apologized on air Wednesday as the hashtag #NursesUnite began trending on Twitter. However, when the backlash continued and the show was dropped by a few of their advertisers, the co-hosts invited a group of nurses on the show as guests to learn more about their profession and shower the hard-working specialists with compliments.

"I personally, I want to say, I learned a lot this week. I think we all did. Thank you so much for coming here," Collins said during Friday's show. "You know, as a result of this situation, I didn't understand the challenges facing nurses, the need to improve how people view and appreciate what you do and I'll be honest I think the comments made Monday kind of played into that and I'm sorry about that."

PHOTOS: A ranking of all of The View's co-hosts

TAGS/ The View , Joy Behar , Controversy , Top Stories
GET POP CULTURED!
*Email entered incorrectly. Please try again.
By subscribing to our newsletter you agree to the Privacy Policy and Terms of Use
Daily
Weekly