Was Lifetime's Unauthorized Full House Story Everything We Dreamed It Would Be? 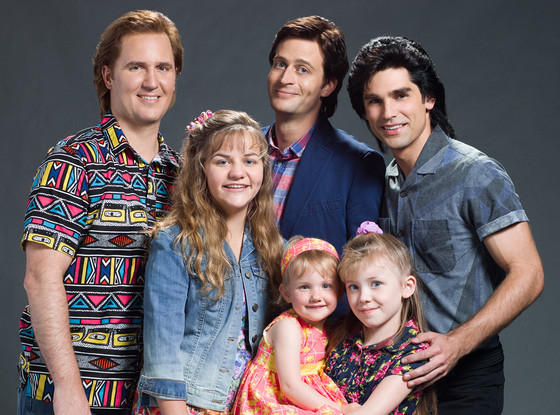 We are both disappointed and quite pleased to announce that Lifetime's Full House movie was just not the unauthorized tell-all we were expecting it to be.

By that, we mean it just wasn't nearly as filled with deep and dirty secrets as we wanted. On one hand, that means we don't feel any worse about our longtime Full House fan status. On the other hand, that was almost boring. We didn't form a negative opinion about any of our favorite childhood stars, and our childhood doesn't feel ruined at all, which is just not what we came for. We wanted drama, and what we got was a family of seemingly normal people just making a beloved TV show together.

In fact, the whole movie felt like a Full House episode—grown men being silly, little girls being adorable, and various life lessons being taught at every opportunity. The only things missing were the catchphrases, of which there were pretty much none.

That's not necessarily a bad thing, and in fact it's kind of refreshing, but it's just not what we've come to expect from our unauthorized Lifetime movies.

Even so, this tell-all did have a few choice moments that we loved, hated, and heavily questioned, just as a good tell-all should.

CLICK: Did all of our favorite Full House trivia facts make it into the movie?

The Guys: We were dubious when we first saw their picture, but Garrett Brawith, Justin Gaston, and Justin Mader were actually weirdly believable as Bob Saget, John Stamos, and Dave Coulier. Our favorite part was definitely when they got into a whipped cream fight, and we really hope that actually happened.

We don't know why there was a musical number, but we loved it anyway. We are always down for a John Stamos jam sesh, even if it's a fake John Stamos. We also grew more and more on board with the hair as the movie went on, to the point where we were slightly disappointed when he got a haircut at the end.

We had forgotten how much we wanted John Stamos and Lori Laughlin to get together in real life until we watched the sexual tension build up between the two actors playing them in this movie. That said, the fact that they didn't end up together in the end made this one of the worst romantic dramedies we've ever seen.

Ending on a dance party at Candace's wedding to Val Bure and a voiceover by fake Dave Coulier felt weirdly real and very sweet.

We didn't really need an extended scene involving Bob Saget romancing a mannequin, or his opening stand-up set involving tampons, but things could have been a lot worse.

The Olsen twins were played by three different sets of twins throughout the movie, and while none of them were bad actresses in any way, none of them were really able to truly capture what it was about Mary-Kate and Ashley Olsen that made them as successful as they are, and were even as toddlers.

The Set: What the hell kind of house was that supposed to be? Definitely not the Tanner house, because everything was backwards, the kitchen was the wrong color and was laid out completely incorrectly, completely without those mysterious back stairs. That, along with vague but not quite right references to other Full House staples made it feel like we were in an alternate universe.

Did a reporter really ask John Stamos, "What's it like to be dating Paula Abdul? You're still on that kid's show, right?" Rude! Also we had totally forgotten John Stamos dated Paula Abdul.

All of our preliminary research told us that the show ended after eight seasons because John Stamos and Candace Cameron Bure didn't want to do it anymore, not because the network decided to cancel it and devastate the whole cast, as in the movie.

Do you really expect us to believe that Full House creator Jeff Franklin made up the concept for the show on the spot when his House of Comics idea was nixed? We don't buy it.

CLICK: Did John Stamos really try to have Marky-Kate and Ashley Olsen fired from Full House?

Perhaps the most alarming part of the movie was that we barely noticed that the whole thing was set in the 80's and 90's due to the cyclical nature of fashion and the fact that most of the clothes wouldn't look too out of place today. This is more of a personal crisis we're having than a critique of the movie, but in any case, it's apparently the perfect time for this show to be returning to our lives in the many ways it is currently doing so.

Overall, not a bad way to spend a Saturday night, though now we're particularly aching for Full House episodes to finally be released on Netflix, mostly just so we can quickly replace the images of these actors in our heads with the faces of the real ones.

What did you think? Vote in the poll below, then head to the comments to weigh in!

PHOTOS: Full House: Where are they now?

TAGS/ Full House , Watch With Kristin , TV , Top Stories
GET POP CULTURED!
*Email entered incorrectly. Please try again.
By subscribing to our newsletter you agree to the Privacy Policy and Terms of Use
Daily
Weekly