Presidential Candidate Marco Rubio Doesn't Understand the Outrage Over Cecil the Lion: What About All of the Dead Babies?! 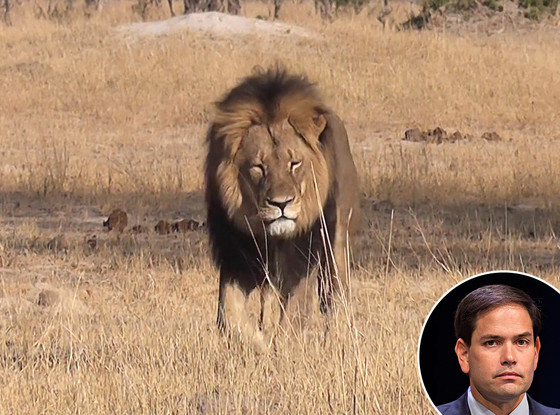 The backlash surrounding Dr. Walter J. Palmer, the American dentist who allegedly killed Cecil the Lion, was felt and justified by a number of people, who couldn't wrap their minds around why someone would choose to murder the protected lion.

And while presidential hopeful Marco Rubio also seemed puzzled about the matter, it wasn't Cecil's death that confused him, but why people were so mad about it.

The Florida Republican senator took to Twitter to not necessarily defend Palmer, but to compare the public's outcry over the incident to other matters he deems as more appalling.

MORE: Here's what celebs had to say about Cecil's murder

"Look at all this outrage over a dead lion, but where is all the outrage over the planned parenthood dead babies," Rubio wrote.

Former Arkansas Gov. Mike Huckabee echoed similar sentiments when he tweeted Tuesday that the lion was getting more attention than the Planned Parenthood story.

"That many in the national media are more concerned with #CecilTheLion than @PPact killing babies to harvest their organs is unconscionable," he tweeted.

Meanwhile, Dr. Palmer wrote a letter to his patients apologizing for the disruption and attempting to explain how he unknowingly killed a protected animal during his big game hunt in Zimbabwe.

The letter, obtained by Fox 9, began with Dr. Palmer telling patients that although hunting is "one of my passions outside dentistry," he doesn't talk about it often "because it can be a divisive and emotionally charged topic."

Dr. Palmer went on to say that during his recent Zimbabwe hunting expedition, he "hired several professional guides and they secured all proper permits." As far as he knew, "everything about this trip was legal and properly handled and conducted."

As for Cecil, a popular attraction at the Hwange National Park who was also being studied in an Oxford University program? In the letter obtained by Fox 9, Dr. Palmer insisted that he "had no idea that the lion I took was a known, local favorite, was collared and part of a study until the end of the hunt." Instead, he "relied on the expertise of my local professional guides to ensure a legal hunt."

"Again, I deeply regret that my pursuit of an activity I love and practice responsibly and legally resulted in the taking of this lion," Dr. Palmer wrote in his letter to patients. "That was never my intention."

TAGS/ Cecil the Lion , Politics , Twitter , Top Stories
GET POP CULTURED!
*Email entered incorrectly. Please try again.
By subscribing to our newsletter you agree to the Privacy Policy and Terms of Use
Daily
Weekly