Poems, Jars & the Biggest Joke in the World: The Bachelorette Season 11 Has Finally Come to a Close That was fun! And also not!

What feels like the longest season of our lives is finally over, and all is right with the world. We've been rooting for Kaitlyn to pick Shawn since night one, and guess what she did? She picked Shawn!

She not only picked him, but she is now engaged to him, after he presented her with a lovely proposal and a gigantic ring that looked like it would get caught on a lot of things.

The night was not all smooth sailing, but most of it really was, especially when it came to the guys meeting Kaitlyn's family.

First of all, her entire family reacted with a perfectly understandable amount of disdain when Kaitlyn revealed to them that Nick V.—the very same Nick V. from Andi's season—was one of her two remaining guys. They clearly watched the same season that we did, and did not have the best impression of him, and they also had a proper reaction when Kaitlyn revealed that she had gone a little too far with him.

He did manage to win them over, however, and even Kaitlyn's mom, who is our new favorite person, was swayed to Nick's side by the end of his visit.

Then, they met Shawn.

Shawn brought gifts. He said all the right things. He shared a sweet story about his sister telling him about Kaitlyn after watching Chris Soules season, and told them about a Snapchat he had taken of Kaitlyn's face, around which he drew a heart.

MORE: Who won The Bachelorette? 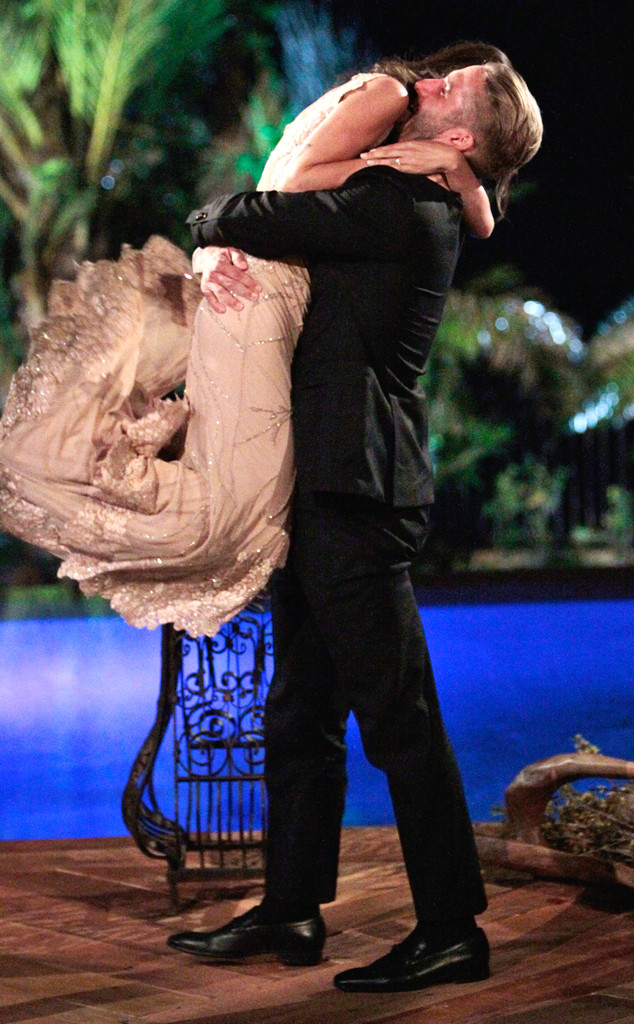 He got blessings from Kaitlyn's mom and dad, and pretty much acted exactly as we would like the potential husband of our future children to act.

Nick did nothing wrong when it came to meeting the family, but Shawn did so much right that it was hardly even fair.

Nick then got the first last date of the season. He and Kaitlyn mostly lounged on a boat and whispered sweet nothings into each other's faces in between make-out sessions. Then, Nick said this:

Surprisingly enough, he actually had a gift stashed away in his actual bedroom. It was a picture of him and Kaitlyn on a date, along with a poem he had written. We don't know why people think poems are romantic, because unless you're Prufrock or Shakespeare, it often just comes off more creepy than sweet.

Kaitlyn, however, was quite happy with the gift from Nick's bedroom, and they continued to kiss.

Kaitlyn's last date with Shawn, on the other hand, was weird and slightly worrying.

They sat at a winery and barely spoke for a while. Shawn was looking so good in his white T-shirt, but he and Kaitlyn were both just so worried about what was going on in the other person's head. Instead of talking it out, they just sat there awkwardly for way too long.

When they met back up for dinner, however, things got slightly better.

CLICK: Chris Harrison takes a stand against Bachelorette bullies and we love him even more for it! 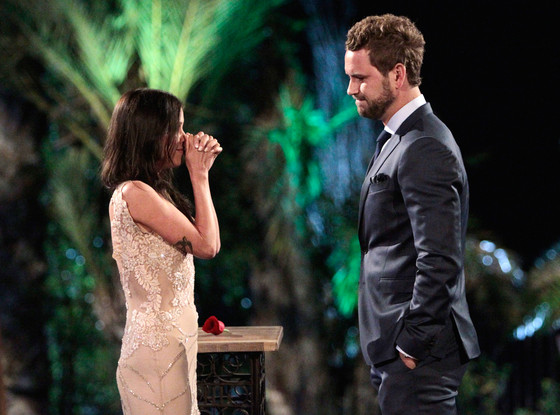 They did spend a weird amount of time talking about what it was going to be like to watch the show together, which seemed like a strange conversation if not for the fact that that would be an extra awkward convo if Kaitlyn weren't intending on picking and then watching the show with Shawn.

Shawn also gifted her with a super Pinterest-y jar full of memories, which is way better than a poem, in our opinion, but maybe we just realy have a thing against poems.

Up next it was time to pick out rings!

Shawn's went about as smoothly as Shawn does most things, but Nick was having Andi Dorfman flashbacks to when she knocked on his door instead of Neil Lane.

This time, it actually was Neil Lane, and Nick found it necessary to tell Neil Lane is whole romantic life story while he picked out a ring, and while Neil Lane was probably regretting having knocked on that door at all.

As it turned out, he did not need that ring, but Kaitlyn waited for him to pull it out to tell him that.

Yeah, Kaitlyn's rejection of Nick was quite harsh. She let him get through his entire speech, up to the point of saying he was hers forever and pulling out the ring, before stopping him.

"I did need every single second that we've had together. The only single explanation… I want to find something that has gone wrong and the only explanation that I have is that my heart is with somebody else. I really needed all this time with you," she said.

PHOTOS: Which Bachelor and Bachelorette couples are still together?

She went on, and he went on, but the deed was done. He was not happy, and he was in quite the million-dollar-ring-throwing mood when he got back in that limo.

"I'm the biggest joke in the world," he said, and in that moment, we felt bad for him.

There wasn't really time to feel bad for him, however, because it was Shawn's turn to turn up the romance, in the most romantic of all places: outside the Bachelor mansion.

"From the moment that I saw you when I stepped outside that limo that first night, I knew that my life was never going to be the same," he began.

It was a speech any person would be lucky to hear.

"Every time I look into those blue eyes, I can't hear myself think. And when I kiss those lips, I get this pit in my stomach every single time. And I don't ever want that to end."

"Shawn, from the minute you stepped out of the limo, I felt something with you that I cannot describe, and I don't think I have ever felt before. Truth is, you light me up and you make me laugh, and most importantly, you allow me to be myself."

"One of the first things I told you was that I truly believe that everything happens for a reason," Shawn said. "After the two best months in my entire life, I know what that reason is, and that's, I'm not supposed to live my life without you. And I'm not going to."

Then, he got down on one knee, all traditional-like, and proposed. She said yes! It was all oh-so-thrilling.

Of course, that was not the end of the night, because there was still the After the Rose special to tackle.

Most of the hour was spent dealing with Nick, who was still hurt with some pretty good reason.

Not only did Nick get a moment with Kaitlyn, but he also had some time to chat with Shawn about their hatred for each other.

"You guys couldn't get a bigger couch than this?" Shawn joked when he sat down next to Nick. Nick then pretended to introduce himself to Shawn, and the two pretty much worked things out.

They both admitted that they had both been pretty immature this season, and that the guys they were on the show were not the best versions of themselves.

Things didn't go quite as well when Nick got to confront Kaitlyn about the brutal way she broke up with him.

She admitted that the way she did it was not the best way, but she also threw back some barbs about the conversations they had previously had about Nick possibly joining the show.

"I said maybe get out of the limo. I didn't say come halfway through the season!"

Oh well! It's all over now, and Shawn and Kaitlyn are free to go about their lives, hitting up every Starbucks, Dunkin' Donuts, and Tim Horton's they come across without fear of being seen.

Shawn also managed to throw out one other perfect line as the show ended.

"The best thing is that I can wake up tomorrow morning and I can stand up for my girl and defend her."

Aww. Now, who wants to place a bet on how long this will last? We're putting all our money on forever!

Vote in the polls below and then head to the comments to give us your thoughts on this season of The Bachelorette!

PHOTOS: A Brief History of Bachelor and Bachelorette Finales