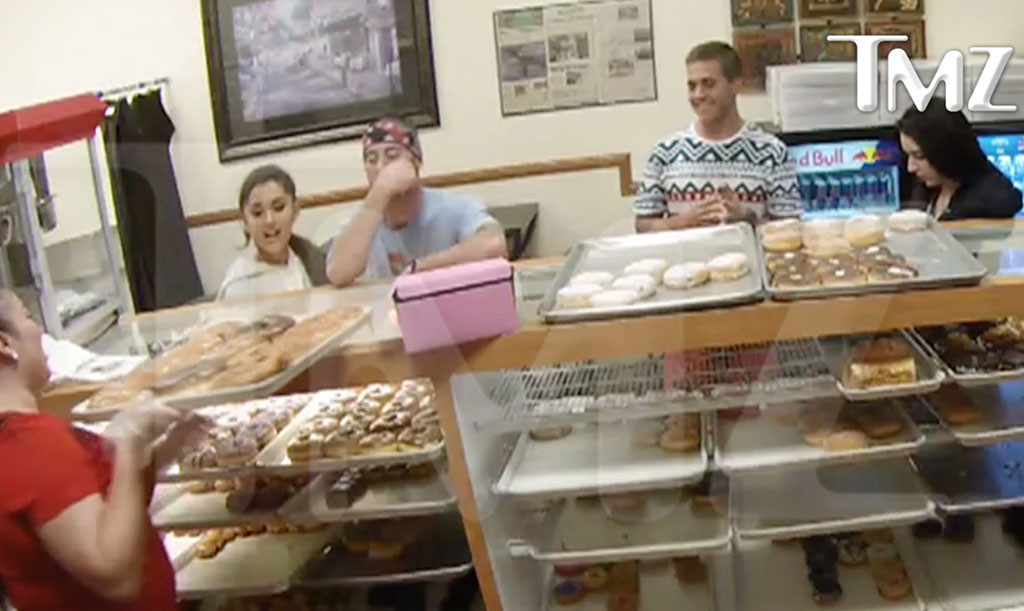 Ariana Grande has created one more, one more problem.

Police in Lake Elsinore, Calif., are investigating a leaked video that shows Ariana Grande apparently licking donuts, The Los Angeles Times reported Wednesday. Riverside County public health officials are now reviewing the surveillance footage, which appears to show the 22-year-old "Problem" singer and her backup dancer, Ricky Alvarez, as they "maliciously lick" donuts on top of a counter. The incident occurred around 11:30 p.m. Saturday. After Grande and Alvarez left, the Wolfee Donuts shop owner took the video to detectives and filed a report, saying the donuts had been deliberately tampered with.

Grande will not be investigated, as Sheriff's Deputy Michael Vasquez said police don't believe a crime was committed. Instead, public health officials are investigating the shop for alleged food tampering.

Department spokeswoman Dottie Merki said health inspectors will be looking into whether the donut shop has a history of leaving food out on display and if they had existing policies to prevent access to it. California health laws require restaurants to protect all food from contact with the public, Merki added.

As Merki told E! News Thursday, Wolfee Donuts was written up for this violation and other violations observed by the inspector. There are not any fines associated with the violations. The doughnut shop was downgraded to a B rating. The facility was given seven days to correct the violations, at which time the Riverside County Department of Environmental Health will conduct another inspection. The second inspection could happen sooner if the owner has corrected the violations and requests an earlier date.

Wolfee Donuts shop manager Ricky Marin said the doughnuts sold out that night, so it is indeed possible that someone ate the doughnuts licked by Grande and Alvarez. The health department has not yet received complaints from people who ate the contaminated doughnuts, Merki told The Los Angeles Times.

An employee was swapping out older doughnuts with fresh ones when she placed them on the shelf. Grande asked one of the shop's employee to retrieve fresh doughnuts from the back of the bakery, so the employee left the tray of powered doughnuts on the display unattended, Marin explained. According to the owner, that allowed Grande and Alvarez to lick the tray during a game of Truth or Dare.

NEWS: Why Ariana Grande's mom worried the singer would be a serial killer

Mayra Solis, a cashier at Wolfee Donuts who was on duty when Grande was in the store, said she didn't purchase any of the doughnuts she appeared to lick. "She was really rude," she said, according to Fox News.

In the same video, which TMZ released Tuesday, Grande said, "What the f--k is that? I hate Americans. I hate America." Amid backlash, the diva apologized Wednesday for the comments she made in the video.

"I am EXTREMELY proud to be an American and I've always made it clear that I love my county," Grande told E! News in a statement. "What I said in a private moment with my friend, who was buying the donuts, was taken out of context and I am sorry for not using more discretion with my choice of words."

The "Bang Bang" singer went on to explain that she leads a healthy lifestyle and is often bothered by "how freely we as Americans eat and consume things without giving any thought to the consequences."

"The fact that the United States has one of the highest child obesity rates in the world frustrates me," the pop star said. "We need to do more to educate ourselves and our children about the dangers of overeating and the poison that we put into our bodies. However I should have known better in how I expressed myself; and with my new responsibility to others as a public figure I will strive to be better."

Grande also denied rumors that she pulled out of the MLB All-Star Concert due to backlash from the video. "As for why I cannot be at the MLB show, I have had emergency oral surgery and due to recovery I cannot attend the show," the "One Last Time" singer said. "I hope to make it up to all those fans soon."

A rep for Demi Lovato confirmed that she has replaced Grande.

"I'm so excited to be headlining the MLB All-Star Concert," Lovato said in the statement. "I hope my fans in Cincinnati are ready to get 'Cool for the Summer!'"

TAGS/ Ariana Grande , Controversy , Top Stories
GET POP CULTURED!
*Email entered incorrectly. Please try again.
By subscribing to our newsletter you agree to the Privacy Policy and Terms of Use
Daily
Weekly