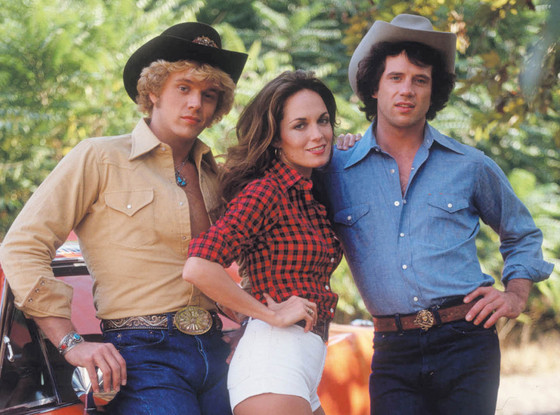 UPDATE 7/2: Dukes of Hazzard star John Schneider is hitting back at TV Land for pulling reruns of his classic show.

Schneider, who also starred on Smallville as Jonathan Kent, said people shouldn't discount the show just because the car has a Confederate flag on the roof. "I am saddened that one angry and misguided individual can cause one of the most beloved television shows in the history of the medium to suddenly be seen in this light," Schneider said. "Are people who grew up watching the show now suddenly racists? Will they have to go through a detox and a 12-step program to kick their Dukes habit? ‘Hi...My name is John. I'm a Dukesoholic.'"

Warner Bros. has also said they will stop licensing models of the General Lee unless the flag was stripped from the cars roof, a decision Schneider said was "overly PC."

"If the flag was a symbol of racism, then Bo and Luke and Daisy and Uncle Jesse were a pack of wild racists, and that could not be further from the truth," he told THR.

In a video posted on his Twitter account, Schneider said the public needs to remember this is about lives lost and not a TV show or a flag.

"Do I think taking Dukes off TV Land is silly? Yeah, of course I do. Silly maybe is not the right word. Do I think it's an error? Yes, I think it's an error because Dukes of Hazzard was maybe one of the most beloved shows ever…and now it's being cast in a terrible light that does not deserve. K? Alright, I'm not talking about the flag, I'm talking about the Dukes of Hazzard…" he said.

NEWS: Sesame Street mainstay is retiring after more than 40 years

ORIGINAL STORY: The Dukes of Hazzard are done...for now.

TV Land has pulled all reruns of the 80's series from its schedule, just one week after Warner Bros. "elected to cease the licensing" of replicas and models of the show's iconic, Confederate flag-laden car, the General Lee, E! News has confirmed.

The flag became a controversial topic in the wake of the tragic Charleston church massacre, with many, including South Carolina governor Nikki Haley, calling for its removal from the Charleston statehouse due to its racist roots.

Retailers like Walmart also announced they would be taking the flag off of their shelves, and even Scandal's Papa Pope (Joe Morton) appeared on The Nightly Show to weigh in on the continued use of the flag, saying, "You think you love this country, what you love is that corruption of the red, white and blue you call valor. What you love is the satisfaction that mess brings when people feel they need to give that flag some credence like it stands for something more than hate."

MORE: Dukes of Hazzard star Ben Jones defends the use of the confederate flag

The General Lee, with a Confederate flag painted on the top, is perhaps the show's biggest and most recognizable item, aside from Daisy Duke's short shorts, and while many are on board with the decision to discontinue the car's merchandizing, the show's stars do not seem to agree.

Ben Jones, who played Cooter on the series and is currently the proprietor of a Dukes of Hazzard museum called Cooter's Place, weighed in on Facebook with a lengthy post explaining that his museum will continue to carry and sell the flag, saying, "I think all of Hazzard Nation understands that the confederate battle flag is the symbol that represents the indomitable spirit of independence which keeps us 'makin' our way the only way we know how. That flag on top of the General Lee made a statement that the values of the rural south were the values of courage and family and good times."

In an interview with THR, Dukes star John Schneider also defended the show's use of the flag. "I take exception to those who say that the flag on the General Lee should always be considered a symbol of racism," Schneider said. "Is the flag used as such in other applications? Yes, but certainly not on the Dukes. If the flag was a symbol of racism, then Bo and Luke and Daisy and Uncle Jesse were a pack of wild racists and that could not be further from the truth."