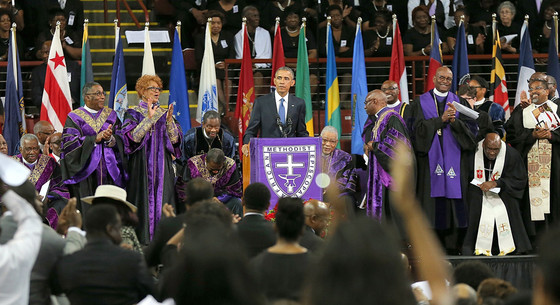 A day for celebration was also a day for mourning, honoring lives lost and remembering that there's still so much work to be done.

After lauding the Supreme Court's historic ruling on same-sex marriage, President Barack Obama traveled to Charleston, S.C., for the funeral of Rev. Clementa Pinckney, the 41-year-old pastor of Emanuel A.M.E. Church and state senator who was one of nine people shot dead inside the historic house of worship on June 17.

Michelle Obama was also in attendance, as were Vice President Joe Biden and wife Jill, Sen. John Boehner, Hillary Clinton, S.C. Gov. Nikki Haley and a number of other lawmakers.

In between choir hymns and rousing sermons, Obama delivered an emotional, 38-minute eulogy to a packed T.D. Arena at the College of Charleston. 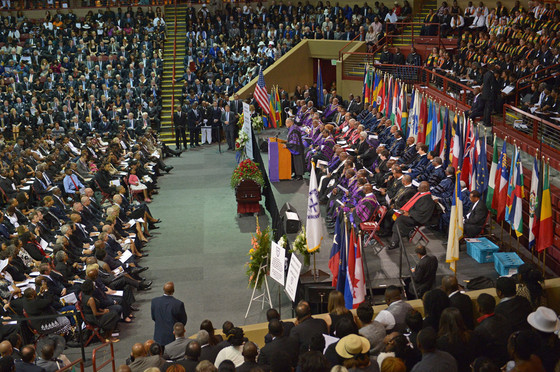 "We are here today to remember a man of God who lived by faith. A man who believed in things not seen," Obama began. "A man who believed there were better days ahead, off in the distance. A man of service, who persevered knowing full well he would not receive all those things he was promised because he believed his efforts would deliver a better life for those who followed."

"A sacred place, this church," the president said. "Not just for blacks, not just for Christians, but for every American who cares about the steady expansion of human rights and human dignity in this country...Blinded by hatred, the alleged killer could not see the grace surrounding Reverend Pinckney and that Bible study group. The light of love that shone as they opened the church doors and invited a stranger to join in their prayer circle. The alleged killer could have never anticipated the way the families of the fallen would respond when they saw him in court, in the midst of unspeakable grief, with words of forgiveness. He couldn't imagine that."

PHOTOS: Celebs outspoken about their religion

Today we lay to rest a Pastor, Senator, husband, and father. On this very sad day we thank a man who taught our state...

Obama also addressed the recent move by Gov. Haley to finally get the ball rolling on having the Confederate flag removed from outside the statehouse in Columbia.

"For too long we were blind to the pain that the Confederate flag stirred in too many of our citizens. It's true, a flag did not cause these murders," he said. "But as people from all walks of life, Republicans and Democrats now acknowledge—including Gov. Haley, whose recent eloquence on the subject is worthy of praise—we all have to acknowledge the flag has always represented more than just ancestral pride."

He concluded, "By taking down that flag, we address God's grace."

Upon the conclusion of his eulogy, Obama paused and then led the congregation in a rendition of "Amazing Grace."

“May God continue to shed His grace on the United States of America." —@POTUS http://t.co/14Z3HnNi8v

Today's funeral concluded a three-day procession that started with Pinckney's coffin lying in state in at the Capitol building in Columbia, after which he was taken to his childhood church, St. John A.M.E. in Ridgeland, and then to Emanuel A.M.E. last night.

Pinckney is survived by his widow, Jennifer Benjamin Pinckney, and young daughters Eliana and Malana.