Where the F--k Was Ghost?! Is Sansa Dead? 16 Lingering Game of Thrones Questions (With Some Answers) 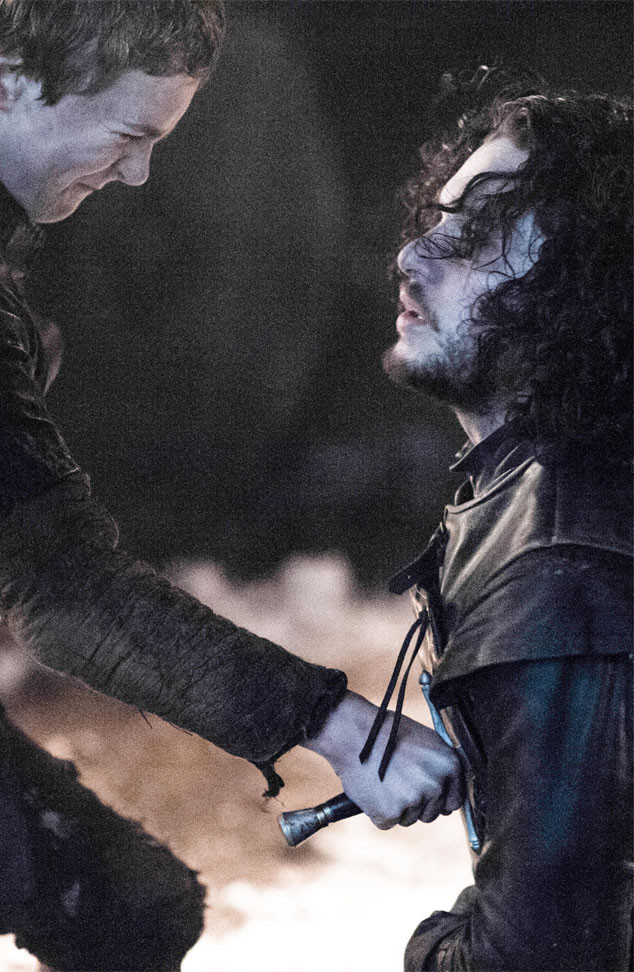 Oh, Game of Thrones. What have you done to us?!

Ever since that shocker-upon-shocker season five finale on Sunday, we have done little more than ponder the show's greatest unanswered questions!

Some have been answered definitively. Some…we just have our best theories.

Check out where we stand on GOT's lingering questions that many of you have been asking/tweeting/screaming to all the gods old and new:

(Note: Nothing truly spoilery below because nothing is book-sourced information.)

1. Why did Jon Snow have to die?
Answer: He did in the books. As executive producer David Benoiff puts it, "This is obviously a big deal, the death of Jon Snow. This is something we've been thinking about for a long, long time…And Ollie being the one who drives in the last knife makes it all the more horrible because on some level he's failed this kid that he wanted very, very badly to do right by. It's one of the great conflicts that makes us love the books sand this saga. Ultimately it's not about good versus evil, it's about people of good intentions who come into conflict with each other because they have very different views of the world. And unfortunately, it did not work out well for Jon Snow in this case."

Short answer: TO RIP OUR EVER-LOVING HEARTS OUT AND MAKE US QUESTION WHY WE WERE EVEN BORN.

2. WHERE THE F—K WAS GHOST?!
Best theory: It's the reason poor Olly was suckered into tricking Jon into jumping out of his office—where Ghost was likely nearby, waiting to pounce at the slightest sound of trouble. There was no sign of trouble and when Jon was lead outside, away from Ghost, he was stabbed almost instantly, without any time for Ghost to get to him. You served your master well, Ghost. And now, here's a .gif for us all to cry over...

3. Is Dany's dragon dead or just tired?
Answer: Tired and hurt and wanting to sleep, according to executive producer D.B. Weiss.

4. Who were the people surrounding Dany at the end?
Answer: The Dothraki, according to Weiss. "When she sees the Dothrakis she knows what that means, and her relations with Drogo was one thing but Drogo is gone and she knows in a way that he was sort of an anomaly."

5. Why did Dany drop her ring?
Answer: "She drops the ring because she's smart," Weiss explains. "And that ring is sort of the breadcrumb that's going to point in the direction that she's being taken. And that somebody down the line who means her less harm than the Dothraki will notice."

6. Where was Pod while Brienne killed Stannis? He could have keeping an eye on that awful candle nonsense?
Best Theory: Probably chasing after a horse whose knot he screwed up again? In reality though, we didn't see the aftermath of Stannis' death scene, so it's possible we see in season six that Pod WAS watching the candle and they will go after Sansa and Theon. (Even though, in all seriousness, I'm OK with them getting lost forever at this point. Just me?)

7. How did Sansa and Theon survive that massive jump?
Answer: If it can happen in Arandelle, why not Winterfell? USE YOUR BRAINS, PEOPLE.

8. Why didn't they show Stannis dying? Is he really dead?
Best Theory: Yes. Although we didn't see the final blow, Benoiff has this to say about why that final scene wasn't overly dramatic/detailed. "I think in the final moment though, it's not relief [to Brienne] because she was expecting this monster, and what she finds is Stannis, who had certain monstrous qualities, I mean he's a man who's willing to sacrifice his own daughter,  but also very human qualities. He's not going to go out whimpering… He probably has some regrets but Not going to open up his soul to this woman he just met. ‘It's over. I get it. Get on with it.'"

9. Did Jorah's greyscale get worse?

Answer: Based on My Own Eyeballs: The area looked slightly bigger in the last shot of it versus the first time we saw it, yes.

10. Will Jaime turn the ship around and go bust some skulls in Dorne for Myrcella's death?
Answer: He. Damn. Better. Well. We also know Cersei will "not be very happy" whenever Jamie faces her again.

11. Is there a more awkward duo than Mr. Friend Zone (Jorah) and the dude who's banging the woman he's in love with (Daario)?
Answer: Nope. We hear they're in talks for a guest spot crossover with NBC's The Odd Couple*.

*Not true. And God, that would be terrible. 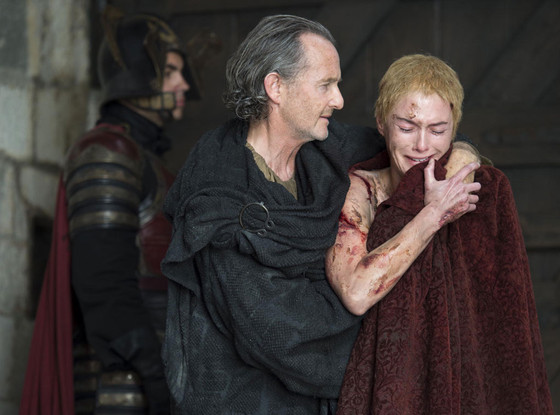 12. Will Cersei play the victim now?
Answer: Not for long. You know her final scene? When she returns back to the castle and Qyburn wraps her in a blanket and offers up his present of FRANKEN-THE-MOUNTAIN (not sure that's his exact name now, but surely close), Benoiff says, "The line in the script was: ‘She knows vengeance will be mine.' And when he picks her up and carries her off, we see that in Cersei's eyes. She's been beaten down and dirty but she's not beaten yet." Damn. 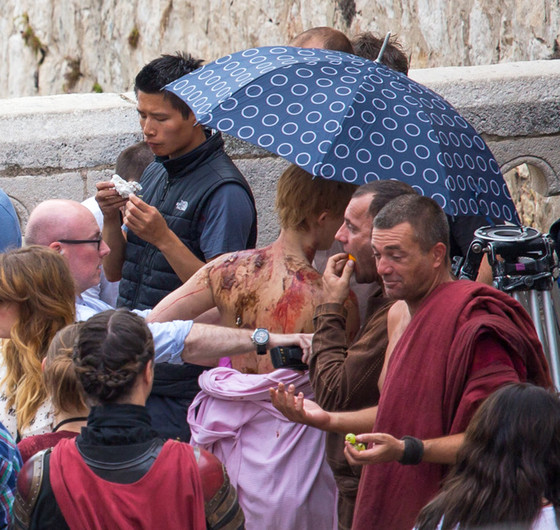 13. Did Lena Headey really shoot that fully nude scene during Cersei's walk of shame?
She had a body double. But still. It was probably horribly horrible to shoot based on the BTS photos we've seen and the fact that it took three days to shoot and she was possibly already pregnant in real life. (Headey announced her pregnancy in February—the scene was shot in October.) So she definitely deserves mad props for going there for this epic scene. "Cersei has done some pretty terrible thing to people who probably didn't deserve it," Benioff explains, "and she's got this coming, and yet it's still hard not to feel for her in this situation. She's in the middle of the worst waking nightmare you could possibly imagine."

14. Is Melisandre full of s—t when it comes to magic?
Best theory: She did have magic—but lost it. In earlier episodes/seasons, she seemed to be able to dabble in some legit blood sourcery, and also delivered that eerie line from dead Ygritte to Jon Snow "You know nothing Jon Snow" at Castle Black in season five. So there was some sort of hoodoo voodoo going on there. But when she showed up at the end of the finale at Castle Black she looked cold. She's never cold. So perhaps the sacrifice of sweet little Princess Shireen Baratheon pissed off the Lord of Light—which, you know, sounds about right.

15. What big things from season five were NOT in the books?
Basically all the totally awful things that happened, especially to females. In the books, Sansa was never married to nor raped by Ramsay, Princess Shireen was never burned alive, Myrcella was never killed, and Jon Snow never had that huge battle with the White Walkers that ended in the massive conversion.

16. Where the HECK is Bran Stark? Will he be in next season?
Still locking eyes with the three-eyed raven? In a massive staring competition? If Bran is back in season six, he will look different. Check out how the actor Isaac Hempstead-Wright looks now… 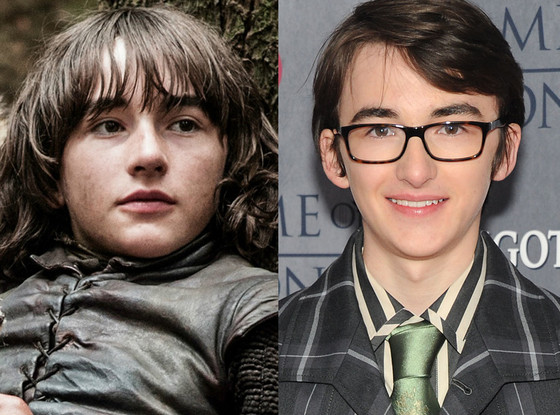 What other questions are keeping you up at night? Got GOT questions? Tweet me: @kristindsantos.

TAGS/ Game Of Thrones , Watch With Kristin , Top Stories , TV
GET POP CULTURED!
*Email entered incorrectly. Please try again.
By subscribing to our newsletter you agree to the Privacy Policy and Terms of Use
Daily
Weekly