Game of Thrones Recap: "The Gift" Finally Gives Fans the Greatest Present Ever 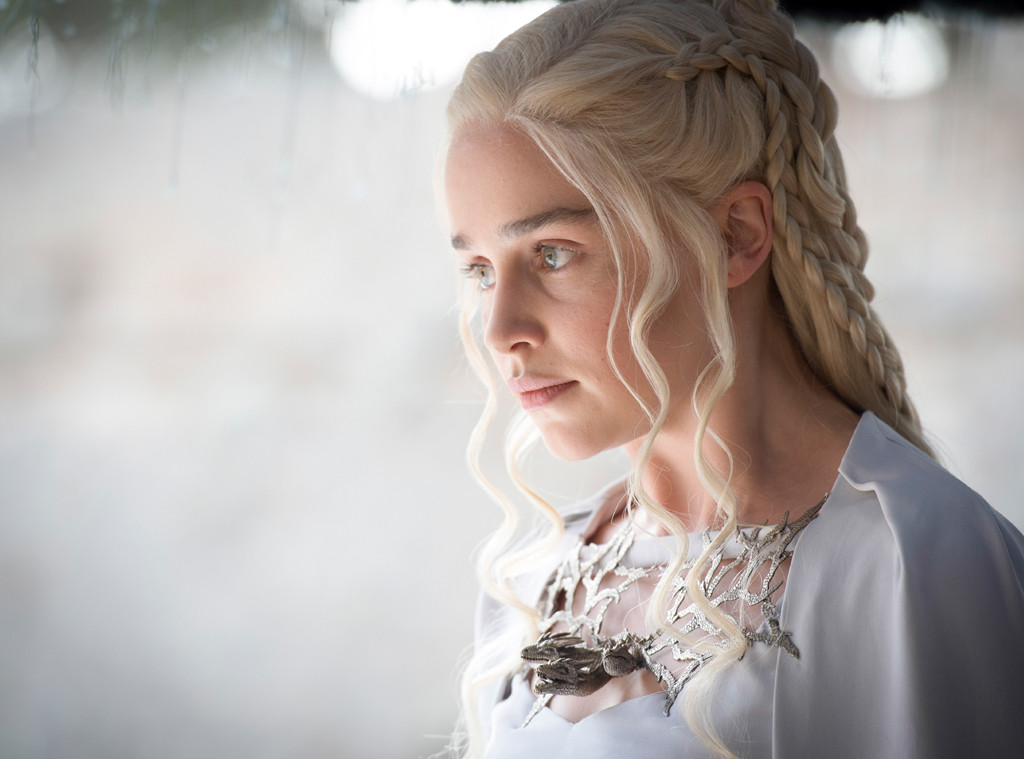 Warning: major spoilers below! Do not read until you have watched Game of Thrones season five episode 7, "The Gift."

It happened! It finally happened! Even though it still hasn't happened in the books!

You guys, we could not be any happier that the Game of Thrones executive producers have decided to go so off-book this season, because they finally gifted us with something George R. R. Martin still has not in his novels: Daenerys Targaryen and Tyrion Lannister have met! Face-to-face! Yaaaassss!

Obviously, this is going to have major ramifications on Dany's mission to regain the Iron Throne for the Targaryen house. With Tyrion by her side (if she chooses to trust him, that is), we might finally see that come to fruition! Things are finally moving for Khaleesi!

But how did Tyrion even make it to Dany's presence? Let's start at the beginning of this game-changing episode, shall we?

MORE: Why going off-book is Game of Thrones' best twist yet 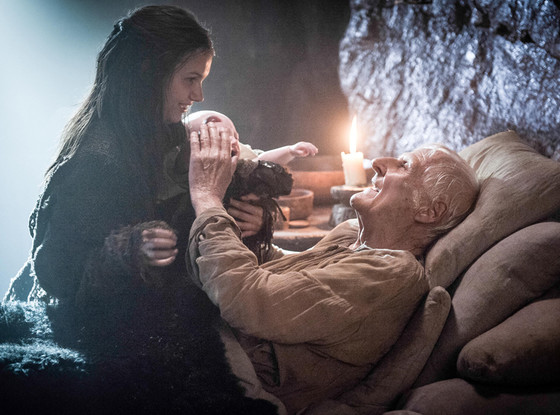 We begin tonight's episode at Castle Black, as Jon Snow makes preparations to go north of the wall with Tormund to reassure all the wildlings that they will be allowed south of the wall for safety, despite his fellow brothers' disapproval—except for Sam, of course. Because Sam hearts Jon. When saying goodbye to his BFF, Sam gives Jon a dragonglass blade in case he comes across white walkers...and then gives him a hug to end all bromance hugs! Awwww.

After Jon leaves, Sam and Gilly visit a sick Aemon, who warns them to take Gilly's baby south "before it's too late." He knows exactly what's coming. Gilly thinks Aemon won't make it through the night…and he doesn't. Sam speaks for him at his funeral and the Night's Watch burn his body.

Later, two Night's Watchmen try to rape Gilly and attack Sam, because although sometimes we forget that not all Night's Watchmen are as good as Jon and Sam, most of them are convicted murderers and rapists, but Jon's direwolf Ghost comes to their defense and the two men flee...only after giving Sam a brutal beating. When Gilly helps him clean up later, they kiss...and Gilly takes things even further. Congrats to Sam for breaking his first Night's Watch vow! 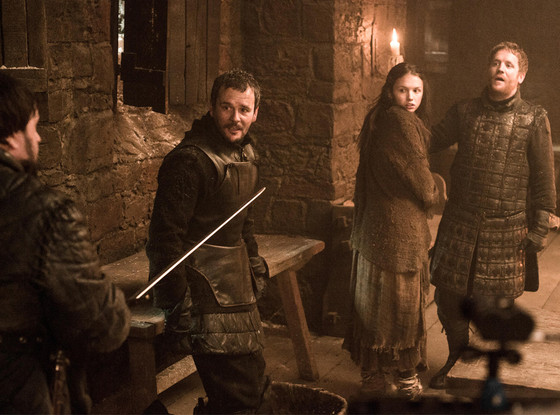 At Winterfell, Sansa's life hasn't gotten any better since her awful wedding night. Apparently Ramsay has been keeping her locked in her room all day long, and comes at night to rape her more. If you were holding out hope that her terrible wedding night was a one-time thing...oy. Poor Sansa. She's even covered in bruises! She begs Theon to help her when he brings her food, but Theon just tells her to do as Ramsay says or else he'll hurt her more. She tries to get through to him, telling him he's not "Reek," reminding him of his family house, and gives him a candle to light in the broken tower for Brienne to see. But does she truly get through to him?

Ugh, Reek! Turns out, Ramsay's torture runs thicker than Theon's bonds to Sansa. He immediately goes to Ramsay to tell him of Sansa's plans to leave, and Ramsay finds the old woman who whispered to Sansa, "The North remembers," aka her only known ally in Winterfell, and he peels her skin off her until she dies! Sansa's hopes, and our own, are shattered. 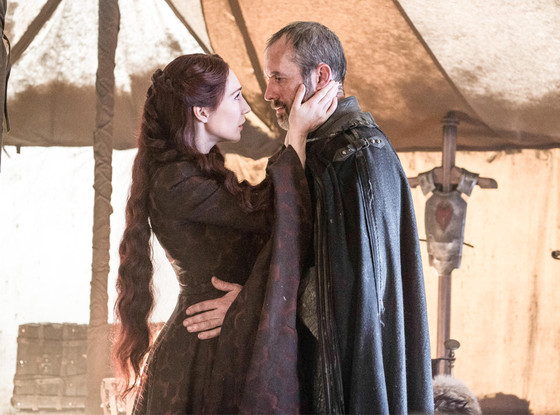 And as for her backup plan, Stannis' attack on the Boltons, that's quickly losing fire as well, as the winter storm rocking the North has only gotten worse and Stannis is losing numbers and horses and supplies. Davos begs him to retreat and try again when the weather is better, but Stannis refuses to back down. He knows the storms will only get worse and that "winter is coming" is more than just the Stark family motto. If they don't strike now, they never will. Plus, he retreated from King's Landing and doesn't want to become known as "the king who ran." Later, Melisandre tries to convince Stannis to sacrifice his daughter and use her blood to assure victory, but he refuses. Let's hope for Shireen's sake he holds his ground on that!

In King's Landing, Olenna Tyrell seeks out the High Sparrow to get her grandchildren's freedom. She even offers to pay for him to free Margaery and Loras but he refuses. Then she threatens to cut off her family's food to the city but that still doesn't faze him. Also worrying about Margaery is Tommen, who despairs that despite his position as king he can't do anything to save his wife, and Cersei offers to talk to the High Sparrow to save her and Loras…but we all know that obviously won't work, since she put them there in the first place!

MORE: Game of Thrones makes another big change from the books...and one character pays the price 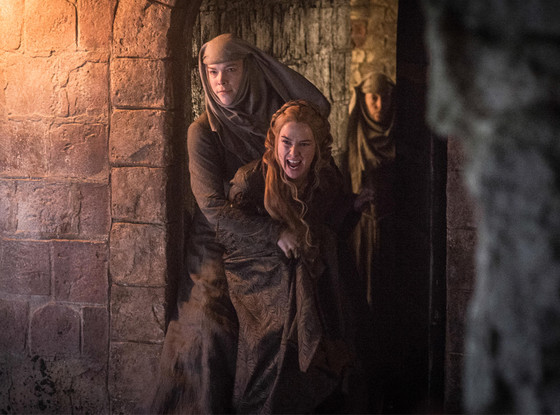 Although Cersei does make good on her word to visit Margaery in her cell...only to rub everything in her face. But her smirk quickly drops from her face when the High Sparrow tells Cersei she will soon be put under the same magnifying glass as the Tyrells…and she's got way more to hide! Turns out, Lancel already confessed all her secrets to the High Sparrow, and she gets hauled away to her own cell! Cersei's finally going to pay for her crimes! Who would have thought we'd ever see this day?!

Later, Littlefinger meets with Olenna in secrecy in the wreckage of one of his destroyed brothels. He confesses to giving Cersei the name of the man whose testimony put Loras and Margaery behind bars, but he offers Olenna the same: the name of a young man. Which man?! Does he mean Lancel? Is that why Cersei is now in prison? Or did Lancel already confess a while ago, and Littlefinger is up to something else with Olenna? Unclear.

MORE: Cersei's troubles are only just beginning on Game of Thrones 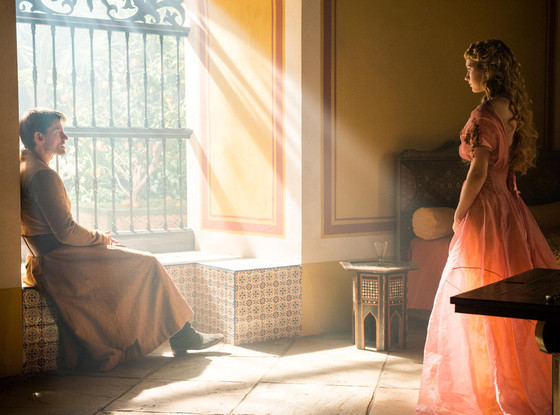 In Dorne, another prison visit takes place, this time between Myrcella and Jaime. She tells her "uncle" that she's going to continue to do her duty for her family and stay in Dorne and marry Tristane…although that last part is actually selfish since she loves her betrothed. Too bad for Jaime! And in his less nice prison cell, Bronn flirts with one of the Sand Snakes, Tyene, until she reveals her blade, which cut his arm during their earlier fight, was coated in poison…and he starts to get woozy, feeling the effects. For a second, we all worry our favorite sellsword won't make it to next season, but Tyene flirts with him some more and tosses him the antidote through the cell bars! Phew, that was way too close.

But we've been saving the best for last: Mereen! Despite Dany's plans to marry Hizdahr zo Loraq to cement her place as Mereen's leader, she and Daario are still sleeping together, and he's crazy jealous of her impending nuptials. She assures him it's just political—obviously—but Daario tells her to marry him instead, making shippers all across the country shout, "Yasss!" But even though she's queen, Dany says she can't do anything she wants to. Daario says that makes her the only person in Mereen who isn't free, and then he advises her to gather all the masters in the land on the day of the big games and slaughter them all. Daario may make a great fighter, but would he make a good husband and advisor to Dany? Also unclear. 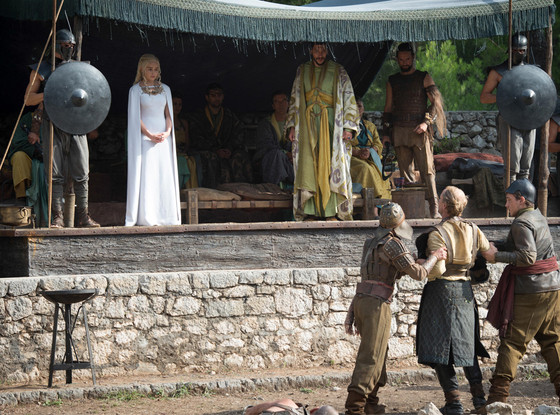 And that's why the fact that Jorah and Tyrion have made their way to Dany's presence is the greatest news ever. Jorah gets bought during a fighting pit slave auction, and Tyrion talks his way into getting bought by the same master. Their actions pay off: at the first fighting pit they are sent to, Dany comes to observe! Jorah fights his way through all the other slaves, and reveals himself to her, and Tyrion presents himself to her as a gift once Jorah kills all the other men. That's right—Dany, meet Tyrion Lannister!

This can only mean good things for Dany, since with an advisor she knows well (Jorah) and an advisor who knows Westeros well (Tyrion) by her side, she can finally leave Mereen and launch her assault on King's Landing to take the Iron Throne. While Daario may be good eye candy, he's not exactly someone with the best advice or knowledge. But don't start cheering yet. Dany still needs to decide whether she wants to hear Jorah and Tyrion out...or just kill them on sight. Let's hope for the former.

What did you think of "The Gift?" Hit the comments section below to weigh in!