"Never Have I Ever" has never been so fun!

Jane Fonda agreed to play the game with Ellen DeGeneres Thursday, in which the Grace and Frankie actress and The Ellen DeGeneres Host revealed whether they had "never" or "ever" done something.

"Never have I ever made out with someone half my age," DeGeneres read.

Fonda paused for a moment before revealing that she, in fact, had done that.

"Never have I ever hooked up in the bathroom at a party," the host read.

"Dou have to tell the truth?" Fonda asked. It turns out, both she and DeGeneres had. Again, the actress wanted some clarification, asking, "What do you think 'hook up' means?" The comedienne, 57, replied, "A hook up is probably a little more than making out. But not a little. But it could be all kinds of things."

Fonda was fine with that definition, saying, "I stick with that."

VIDEO: Should you binge-watch Grace and Frankie? Jane Fonda weighs in 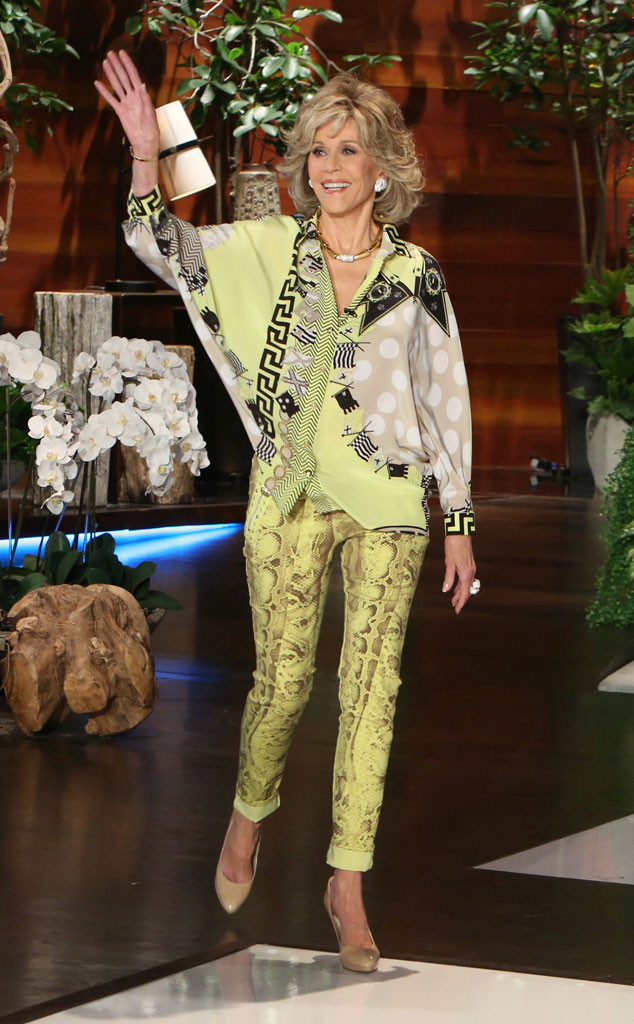 "Never have I ever joined the mile high club," DeGeneres read.

This time, Fonda was proud to tell the world that she had indeed done the deed. "I was 50 years old. It was my fourth date with Ted Turner. He has his own plane, and we get on the plane, and he said, 'Are you a member of the mile high club?' I didn't know what he was talking about," she said. "And I joined!"

DeGeneres joked, "Most people are in an economy bathroom!" To find out if Fonda has ever "been drunk before noon" or "stolen something," watch the video above!

During Thursday's appearance, Fonda also explained what drew her to Grace and Frankie. "I wanted to do a television series. I wanted to give a cultural face to older women because we're left out," she told the host. "The mass media doesn't really deal with you after a certain age, and I wanted to change that."

In the series, which debuted May 8, Fonda had her first "onscreen kiss in 15 years" with Craig T. Nelson. "I left the business for 15 years, and if somebody had told me then that at 77 I would be back at a thing called Netflix. It's not even television! It's like you can look at the whole season all at once in six hours or something like that. And that I would have my first kiss at 77 since 15 years, I would say you're crazy. But it was fun," said the Oscar-winning actress, who promised there was "no tongue" involved. "The lesson for me is that you just never know what's in store in life. You just never assume. I thought I'd never be back with a career in acting and certainly I'd never have an onscreen kiss, and look what happened!"

TAGS/ Jane Fonda , Celebrities , Top Stories
GET POP CULTURED!
*Email entered incorrectly. Please try again.
By subscribing to our newsletter you agree to the Privacy Policy and Terms of Use
Daily
Weekly