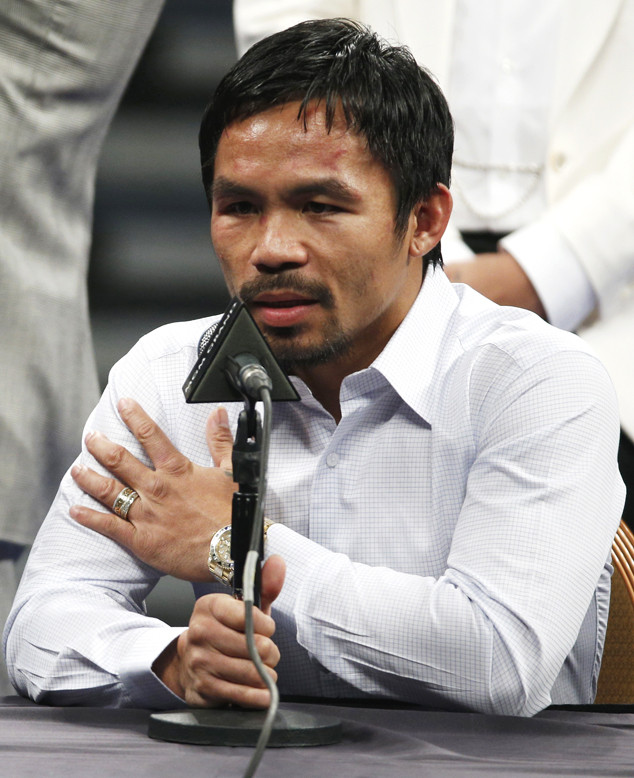 We know a lot of people were pretty pissed when they were faced with blank TV screens after ordering up the so-called "Fight of the Century" on Saturday night on Pay Per View.

And now we may find out just how many people felt scorned the morning after when they found out that Manny Pacquiao, who lost the 12-round bout to Floyd Mayweather, fought hurt.

Stephane Vanel and Kami Rahbaran have filed a lawsuit on behalf of themselves "and the putative class" that alleges Pacquiao, his manager Michael Koncz, promoter Top Rank and Top Rank founder Bob Arum commited consumer fraud by not revealing to the Nevada State Athletic Commission beforehand that Pacquiao had injured his right shoulder in an April 4 sparring session. Koncz told reporters yesterday that Pacquiao will be undergoing surgery to repair a tear below his rotator cuff. 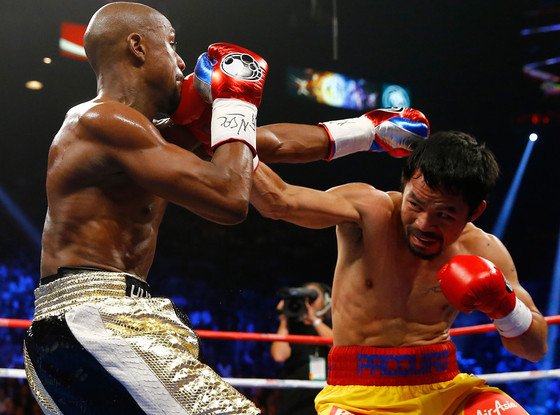 Pacquiao's camp previously said that he expected to have been able to receive an injection to relieve the pain on the night of, but just hours before the fight the NSAC denied his camp's request, despite the U.S. Anti-Doping Agency having signed off on it weeks beforehand. (The injection reportedly contained several non-banned substances, including lidocaine.)

Pacquiao told reporters in a post-fight inteview in his hotel room that his right arm was swinging at about 60 percent, per the Los Angeles Times, and he reinjured it in the fourth round.

"I didn't want to disappoint the fans so we decided to continue the fight," he said. "Floyd knew I was injured. He kept pulling my arm. He kept scratching my face with his gloves, too." 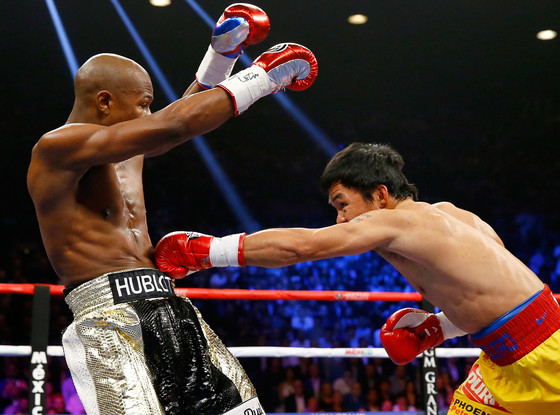 At Friday's weigh-in, the boxer checked "No" on a NSAC medical form where it asked if he had a shoulder injury; the form also included a note from his advisors listing medications that Pacquiao had used in training and might use on fight night.

In the suit filed in federal court in Las Vegas, a copy of which was obtained by E! News, Vanel and Rahbaran are seeking class-action status for anyone who bought tickets to the fight, ordered it on PPV or bet on the outcome.

Proceeds from ticket sales has been estimated at $74 million, while the PPV take is expected to exceed $300 million. The plaintiffs are seeking at least $5 million in damages.

Pacquiao's attorney, Daniel Petrocelli, told the L.A. Times that he would file a motion to dismiss the suit, calling it "frivolous."

In a statement issued Monday, before the lawsuit was filed but in response to the controversy, Top Rank and Pacquiao's management said:

"During training, Manny Pacquiao suffered a right shoulder injury. Manny went to see world-class doctors, partners in the prestigious Kerlan Jobe Orthopedic Clinic,  who performed tests and, in consultation with Manny, his promoter, and his advisors, concluded that with short rest, treatments, and close monitoring, Manny could train and, on May 2, step into the ring against Floyd Mayweather."

"His shoulder wasn't perfect but it had improved in training camp. However, as Manny has said multiple times, he makes no excuses. Manny gave it his best."

PHOTOS: All the stars at the Mayweather vs. Pacquiao fight in Vegas

TAGS/ Sports , Legal , Top Stories , Money
GET POP CULTURED!
*Email entered incorrectly. Please try again.
By subscribing to our newsletter you agree to the Privacy Policy and Terms of Use
Daily
Weekly