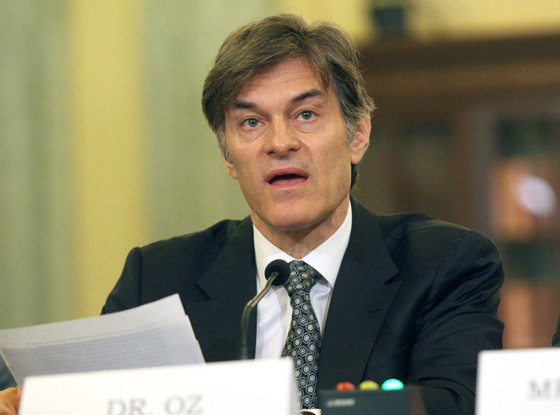 UPDATE: Dr. Mehmet Oz has responded to the letter, saying in a statement to E! News: "I bring the public information that will help them on their path to be their best selves. We provide multiple points of view, including mine which is offered without conflict of interest. That doesn't sit well with certain agendas which distort the facts.

"For example, I do not claim that GMO foods are dangerous, but believe that they should be labeled like they are in most countries around the world," he added. "I will address this on the show next week."

Dr. Mehmet Oz has come under fire again over his on-air medical advice and this time, his latest critics appear to be looking to have him fired from his day job.

A group of 10 physicians, surgeons and professors recently penned a scathing letter to Columbia's University Dean of Medicine Lee Goldman, saying that the Dr. Oz host's presence on the school's faculty is "unacceptable" and that he promotes "quack treatments." As of Friday, he remains on staff.

The 54-year-old cardiothoracic surgeon and popular Emmy-winning TV host has been criticized before about some of the health advice and so-called "miracle" products he has promoted on his show. Oz serves as a vice chair at the Ivy League school's College of Physicians and Surgeons Department of Surgery and has worked as a professor at Columbia since at least the mid '90s.

"We are surprised and dismayed that Columbia University's College of Physicians and Surgeons would permit Dr. Mehmet Oz to occupy a faculty appointment, let alone a senior administrative position in the Department of Surgery," read the letter, signed first by Henry I. Miller, according to Vox and The Washington Post.

The group accuses Oz of  repeatedly showing "disdain for science and for evidence-based medicine, as well as baseless and relentless opposition to the genetic engineering of food crops," and has "manifested an egregious lack of integrity by promoting quack treatments and cures in the interest of personal financial gain."

The letter states that "members of the public are being misled and endangered, which makes Dr. Oz's presence on the faculty of a prestigious medical institution unacceptable."

Columbia University Medical Center spokesman Doug Levy wrote a response to the group, saying, "As I am sure you understand and appreciate, Columbia is committed to the principle of academic freedom and to upholding faculty members' freedom of expression for statements they make in public discussion."

Miller is a researcher at the Hoover Institution at Stanford University, whose research focuses on public policy toward science and technology, including pharmaceutical development, genetic engineering in agriculture. In an April 10 article he co-penned for Slate, he criticized Oz for allegedly sowing "seeds of mistrust on genetic engineering" after watching the doctor talk on his show about the safety of genetically modified apples.

Others who signed the letter include a psychiatrist, an anesthesiologist and a professor of cancer research. None of the signatories work at Columbia.

Last year, scores of people mocked Oz over his on-air advice on Twitter, turning a scheduled Q&A into a full-fledged snark session.

TAGS/ Dr. Oz , Top Stories
GET POP CULTURED!
*Email entered incorrectly. Please try again.
By subscribing to our newsletter you agree to the Privacy Policy and Terms of Use
Daily
Weekly