Amy Schumer Thinks She Might Look Like Dianna Agron "If She Were Stung by a Million Bees"—Watch Now! 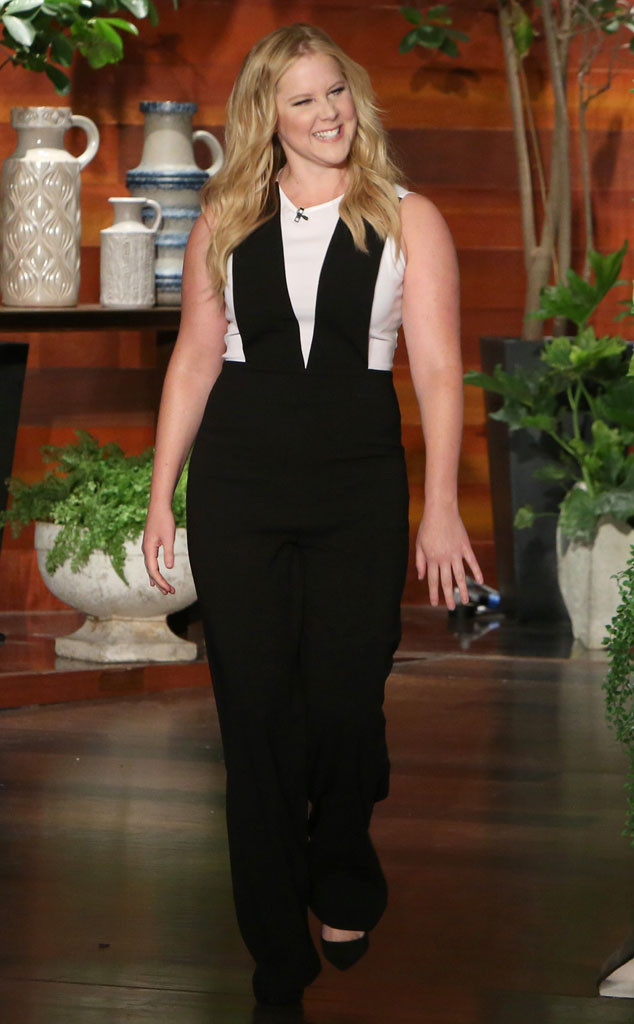 Before she hosts the MTV Movie Awards Sunday, the comic stopped by The Ellen DeGeneres Show and explained why she prefers the East Coast to the West Coast. "Do you like it here?" DeGeneres asked her.

"I mean, I don't fit in here. Just straight up body type," the Inside Amy Schumer star said. "Like in L.A., my arms register as legs and it's like, 'Why is that octopus out on Sunset?' It's not for me out here. It's not." Asked what she does when she visits L.A., Schumer joked, "I cry. I just sit in my room [bawling]."

"Last time I was here, right form the show, I got courtside tickets to a Laker game. My business agent thought I was mad at him for sexually harassing me. But I'm 33, so I'm just starting to really appreciate that, you know what I mean? It's true! I can't speak for everyone...but in your twenties, you walk past a construction site and you're like, 'Oh, don't look!' But then in your thirties, I'm just like, 'What about this?'" Schumer said, standing up and pointing to her butt. "It's like my skirt's over my head and I'm like, 'Ahh!' They're like, 'We're eating.' It changes. It really does. So, I got courtside seats...I went and I thought it would be free booze. It's not! It's not! I guess you have to be on the team to get free booze."

NEWS: Amy Schumer says she doesn't have time for sex

Schumer was randomly seated next to Glee's Dianna Agron at the game.

"She played the cheerleader Quinn. That lets you know how hot she is," she said of the TV star. "She's like the most gorgeous girl ever. Her name was Quinn on that show. To pull of that name...if my name were Quinn on a show, they'd be like, 'Oh, the jolly Irish groundskeeper that does a jig time and again?'"

Photos of the two sitting courtside then appeared on the big screen.

"Is she not an angel? The whole night she's posing because she knows people are taking pictures of her. I obviously don't! I learned that my resting face is just a scowl. And I learned that have what I now call an 'at-risk chin.' This is not a good section. If I don't keep it at sea level it just doubles itself...I [have] no idea people are taking pictures. I'm pounding red wine. I thought it was great. I get red wine teeth right out the gate, you know? Just the first sniff of merlot. Just True Blood mouth. I look like I've been feeding."

Schumer then joked about the manner in which she eats popcorn.

So, what did she learn from sitting next to Agron? 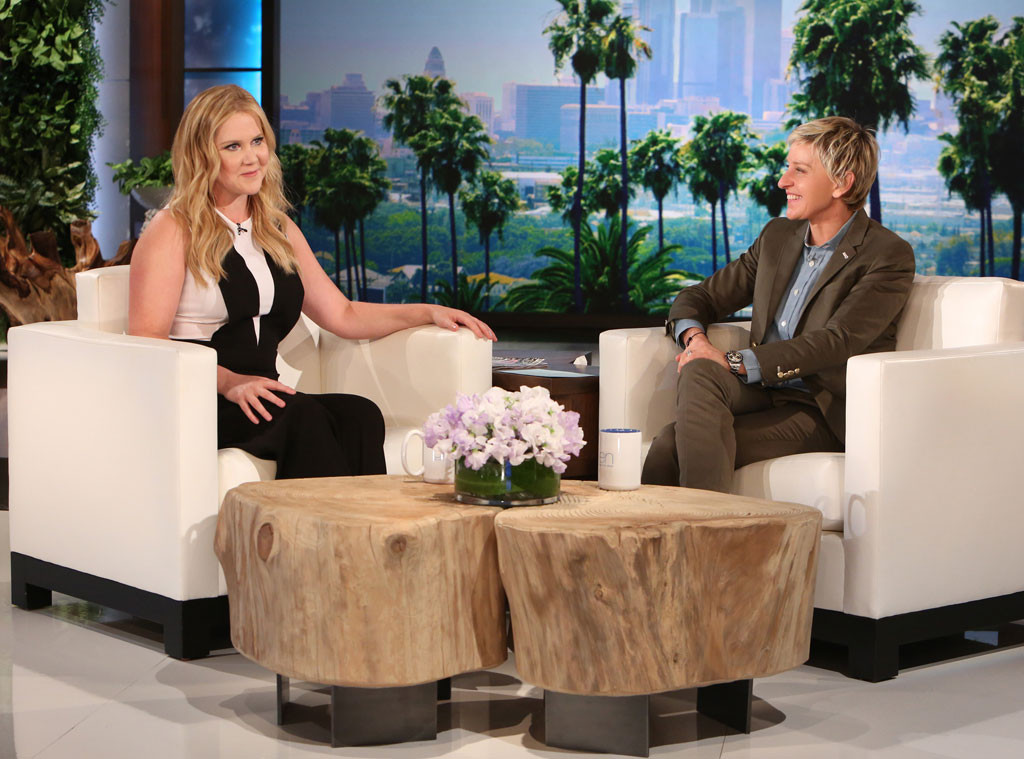 Schumer also revealed that she's single. "Are you dating at all?" DeGeneres asked.

"No. Well, I know everyone here is like, 'How do we date you?' Thank you. Um, you can't, and not just because I'm not totally out of the woods with this UTI I have right now, but also..." she said with a laugh.

In all seriousness, she said, "I'm not on any dating websites.

"I have one app on my phone that's kind of. It's called Food Spotting. It's like Tinder, but for food."

According to Schumer, it's quite an app. "They let you know about food in your area. So this week in L.A. I was eyeing this one particular scone and under a mile away. Coincidence? Probably not. So I'm like, 'Should I go?' And my friends are like, 'Go! Check it out.' So I went to the scone and I kind of just like saddled up to it and I'm like, 'Oh my God, you look just like your picture.' So I'm kind of dating," she said.

TAGS/ Amy Schumer , Celebrities , Top Stories
GET POP CULTURED!
*Email entered incorrectly. Please try again.
By subscribing to our newsletter you agree to the Privacy Policy and Terms of Use
Daily
Weekly