Mila Kunis Admits She Thinks About Baby Wyatt When She Has Sex With "Maybe" Husband Ashton Kutcher—Watch!

Talk about starting with a bang!

For James Corden's premiere episode of CBS' The Late Late Show, Mila Kunis regaled the new host and fellow guest Tom Hanks with a story about her sex life with Ashton Kutcher. Yes, the Jupiter Ascending star really did divulge all the dirty details about her late-night romps with the Two and a Half Men star.

Asked how life has changed since giving birth to 5-month-old Wyatt Isabelle Kutcher, Mila said, "I love it. I've said this before, I've gone on record—I loved being pregnant and I love being a mom. I really do."

"Now that you're a mother, do you still get to enjoy date nights and date days?" James asked.

"Yeah. We really do. Somebody gave us that advice when I first got pregnant, to make sure you take the time for yourselves," the actress said. "My parents—we're very lucky—live down the street, so we have them do what's called 'monitor sitting.' The baby goes down to sleep and they have to watch the monitor. I would say once a week we go out on a date. It's not just the two of us, but like a double date or something. But yeah, [it's] just to reconnect, and we make an effort to not talk about the baby."

"Is that possible?" Tom asked.

Regardless, she told them, "It's important. For that one hour, we try very hard to connect."

POLL: What did you think of James Corden's Late Late Show debut?

James agreed, but added, "It's almost impossible once you have a child, to the point where you might even be talking about it during sex. 'You know, she almost rolled over today.' 'Really? That's amazing.'"

"I have been like, 'I wonder if that's her making that...Wait, what's happening?'" she added.

James joked, "Then you look and it's him and he's just crying during sex. That's what he does."

The Into the Woods star also asked Mila if she plans to have more kids. "Yeah, for sure," she said.

Tom is on board. "What do you say? Yes? No? I say yeah!" he said as the audience cheered.

"Tom's a grandpa, so he knows," Mila said with a giggle. 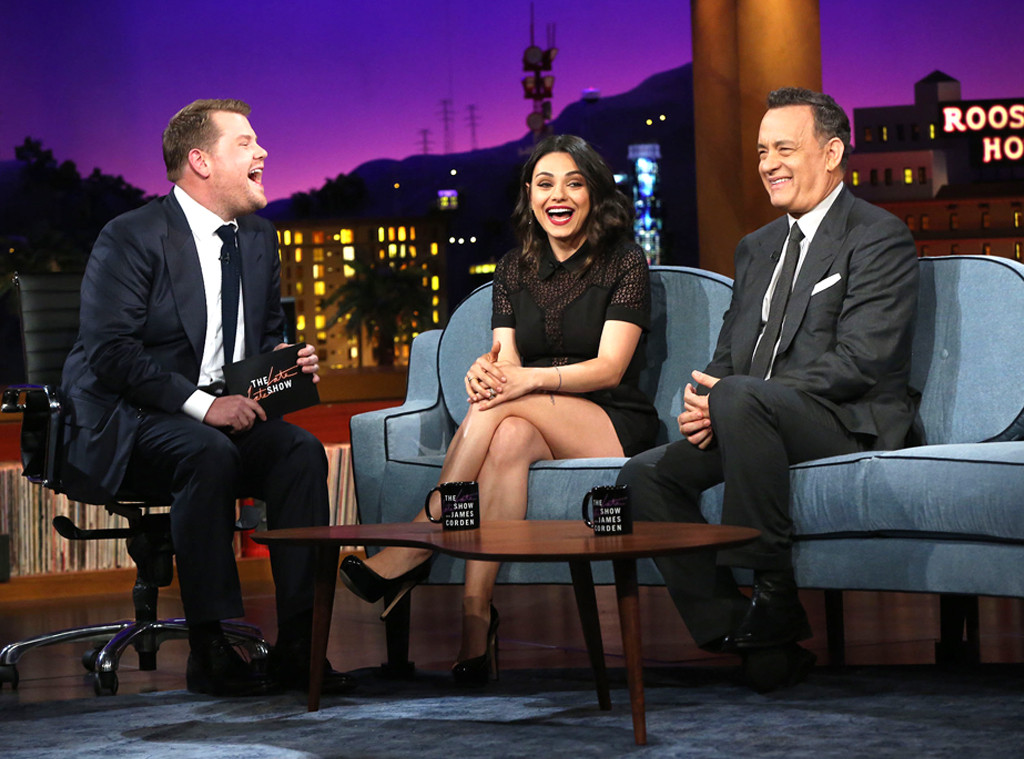 James asked how Ashton is as a father, and Mila said "he's amazing."

"You mean your husband?" Tom asked in a silly voice.

A stunned James asked, "Are you married? Did you get married? Have you gotten married?"

"I don't know," Kunis said, laughing. "Maybe." James pressed her for a real answer, saying, "Come on! No one's maybe got married. You either got married or you haven't got married. Have you got married?"

"Well, that's a yes as far as I'm concerned," the British host told his guest. "Let me look at your hand! Oh, you got married. They've got married, everybody! Oh, my God! Oh, my God! Mr. and Mrs. Kutcher!"