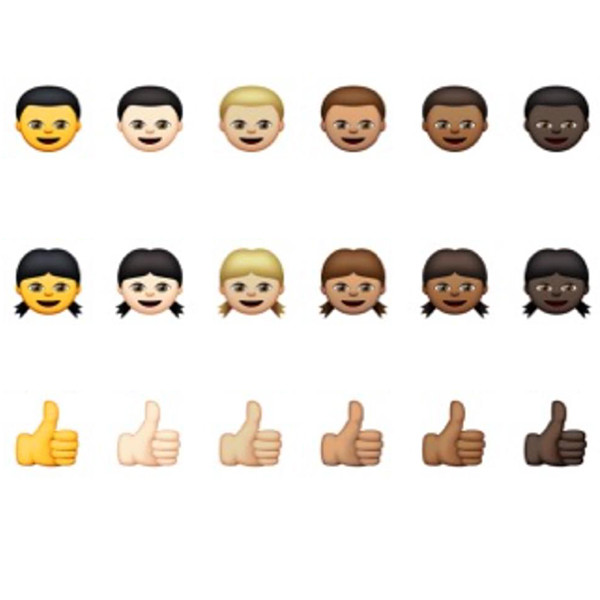 Finally, emojis are going to come in all skin tones.

According to TechCrunch, Apple has been testing out the newest beta version of iOS 8, which will feature an emoji update that will allow users to choose from six different skin tones. So now people can finally have a black Santa!

Developers who have seen the new additions have been posting screenshots of the emojis, which feature a very yellow skin tone that people assumed was supposed to (rudely and inaccurately) represent Asian people, but it just looks like the little faces have jaundice. Or it's maybe a Lego character.

RELATED: 37 new emojis are being considered for release

Apple just dropped it's new diverse emoji and it looks like it was also co sponsored by Dark & lovely relaxer pic.twitter.com/RHL7uw6sf4

Each emoji representing people on Apple platforms now offers a choice of skin color, with abstract color as the base. pic.twitter.com/VsksabEjmM

One Apple developer notes that the yellow emoji is not supposed to represent Asians, but it's the "default emoji yellow."

(The yellow emoji aren?t meant to represent a skin tone. They?re default emoji yellow. Tap to hold to get one of the five skin tone choices)

The skin tone choices are only available "when applicable," meaning you cannot change the color of your poop emoji. It's got to stay dark brown, but maybe one day we can change it to yellow so we can accurately tell our friends that our morning-after drinking bowel movement does not look right.

There's also a larger variety of country flags and emojis to represent different types of families, plus the iPhone 6 and Apple Watch has been added to the catalog. You know, in case you want to mock someone for buying the Apple watch through emoticons.

This update to include more races and skin tones is fantastic, but we still have a very large bone to pick with Apple. Where the hell is the taco emoji?!

Unicode Consortium announced 37 "candidates" that were supposed to join the emoji crew, and the many months without a taco emoji has driven us to the breaking point. Seriously, what is there to consider?! It's a taco. We need it.

And we're not alone. Twitter also wants to know where the hell our taco emoji is:

Life would be so much easier if there was a taco emoji.

How is there not a taco emoji? There's literally everything but... #INeed

why isn't there a taco emoji #iwanttacos

but the real question is... why the hell is there no taco emoji?

How am I properly supposed to convey my emotions when there's no taco emoji?

The new racially diverse emojis are reportedly going to hit the general public in March.

And the taco emoji is reportedly coming NEVER, or at least that is what we being led to believe.

PHOTOS: Check out what iPhone cases some of your favorite celebs are rocking!