As Dax Shepard previously revealed on The Ellen DeGeneres Show, his wife Kristen Bell was in labor for 33 hours when she welcomed their second daughter, Delta, in December 2014.

While the Parenthood star compared the birthing experience to "Fallujah," the House of Lies actress experienced a completely different set of emotions when she was giving birth.

"He told you how traumatic it was for him, but to be honest, my perspective was, as someone who has never experimented with drugs, I really enjoyed it," Bell confessed on The Ellen DeGeneres Show Monday. "It was kind of a wonderful experience for me. While they were doing it, I actually thought, 'What else could we get done down there? Maybe lengthen the shins? I've always wanted to be like 5-foot-7.' Just anything to keep the epidural flowing. These modern hospitals, man! They treat you right."

Bell had an unplanned C-section, so she was given an epidural. "I felt really great," she said.

There were side effects, of course. "It wears out of your system slowly. About six or seven hours later, I'm sitting in my hospital bed and I say to Dax, 'Well, I think the epidural has finally worn off.' He looks over and I am scratching holes in my face like a meth addict, and I'm like, 'I think it might be time to re-up. I don't know. It's definitely worn off.' He's like, 'Are you sure? You think it's worn off, hun?'" she said. "The nurse comes in, and obviously she notices and offers a little bit of Benadryl to help with the itching and to put me to sleep. Well, what a cocktail, because I had a lot to say more than when I'm sober!" According to Bell, she told "all these stories" but took 30-second pauses between the words "and" and "the."

"And I would just...go out," said the Veronica Mars actress, also mom to daughter Lincoln, 22 months. "And I grab my phone and the light was like...Do you know what looks really good when you're on that stuff? Hand bags! Or throw pillows or rugs. And I was just like, 'Bing! Bing!' Internet shopping. 'Woo!' Thank God I didn't remember my credit card number. So nothing bad happened, but Dax was like... Honestly, a picture of a throw pillow was as mind blowing as seeing The Matrix for the first time." 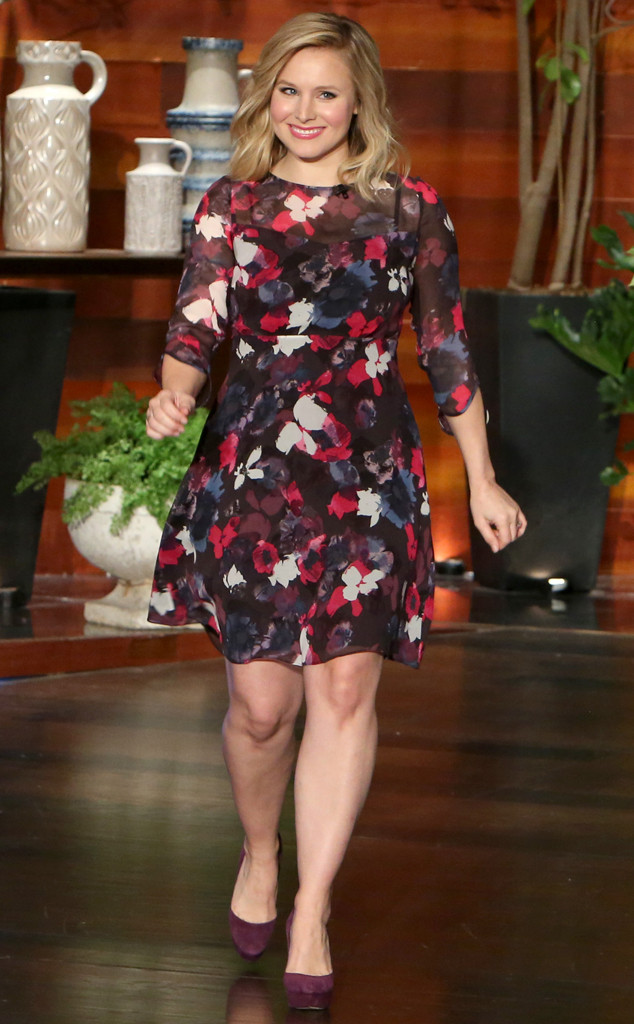 Staying home, however, has made the actress a bit stir crazy.

"This feels like a vacation coming here. It really does. Everyone here speaks in full sentences and no one's asked me to wipe their buns…yet," Bell joked. "I'm very happy to be out of the house right now."

Neither Bell nor Shepard want more children. "We don't want to be out numbered," she said.

The Frozen star joked that she will only change her mind if she "accidentally" gets pregnant and her "third child watches this clip and realizes that he was an accident. Sorry, honey!"

In all seriouness, she said, "We're gonna cap it at two."

Ellen DeGeneres said Shepard "must feel outnumbered because now he's got all girls in the house." According to Bell, the Hit and Run star doesn't mind. "He likes to say he never thought he'd be surrounded by so many women and not having this much sex," she joked.

TAGS/ Kristen Bell , Celebrities , Top Stories
GET POP CULTURED!
*Email entered incorrectly. Please try again.
By subscribing to our newsletter you agree to the Privacy Policy and Terms of Use
Daily
Weekly