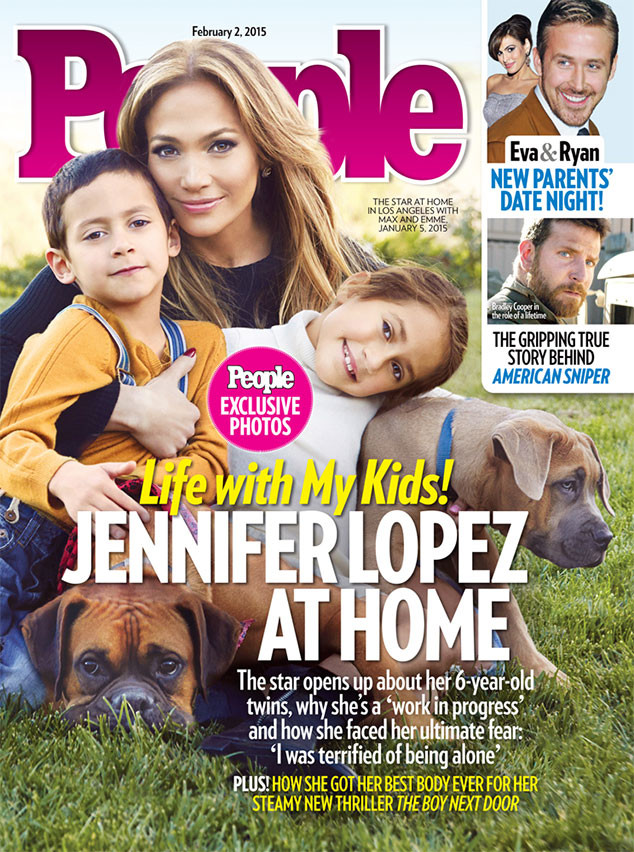 This time, however, it makes a bit more sense.

When the twins made their worldwide debut in the publication's March 11, 2008 issue, Lopez was the sole parent to appear on the cover; Anthony, her husband at the time, was shown inside the magazine. The couple called it quits in 2012, their divorce was finalized in 2014, and Anthony has since remarried.

Lopez addresses her ex-husband's absence in the magazine's Feb. 2, 2015 issue. Recalling their breakup, the Boy Next Door actress, 45, explains, "It was awful. But I had to make a commitment to myself to be alone: no flirting. No possibility of anything. No boys in any way, shape or form. I said, 'I'm shutting it down.' I'd never been alone. I grew up sleeping in a bed with my two sisters. When I became famous, I was surrounded by people and always had a boyfriend or a husband or some relationship, one after the other. At night I said to myself, 'You're not working. The kids are asleep. What do you like to do, Jen?' I didn't know. It was always, 'What does he want to do?' It was very eye-opening to me to spend time completely by myself. I was terrified of being alone: The idea that we are alone in this world, we were born alone, we die alone—it sent panic through my body. I said, 'I have to face this fear,' and I did."

So, what did she learn from the experience?

"I wanted my relationships to go well, but they were not. There were times when I was just crying to myself: 'I hate this. I hate being alone.' But the goal was not to be alone forever. The goal was to be OK on my own so I can make good choices. When I'm afraid, I just make a silly choice. My [dating pattern] was, 'Come on in. it doesn't matter how you treat me or what you do. I'm going to accept it because I am so afraid that there will be nobody here.' But I think in our 20s and 30s we're meant to explore and make a ton of mistakes," she says. "And then by our 40s we come more full circle and figure things out."

Lopez has forgiven herself for mistakes she made in her youth. In fact, when she thinks about her past boyfriends and husband, the singer is reminded of her naiveté—and her resolve to do better next time.

"I would have loved for my marriage in my 20s [to chef Ojani Noa in 1997] to last till I died, but I see that maybe that was too early. I had more things to learn, and he had more things to learn," the two-time Grammy nominee says. "And [same with] the next person I married [choreographer Cris Judd in 2001]. And that's who we are and then we're great for somebody else. Until then it's going to be a struggle."

Lopez hasn't given up on love, though. "I still believe in the fairy tale," she says.

"I believe in marriage. I believe that two people can commit to each other and share a life together." She is also thankful for her kids, who "make you believe in all kinds of things, like how anything is possible."

For more from Lopez, pick up People's Feb. 2 issue, on newsstands Friday.

TAGS/ Jennifer Lopez , Magazines , Celebrities , Top Stories
GET POP CULTURED!
*Email entered incorrectly. Please try again.
By subscribing to our newsletter you agree to the Privacy Policy and Terms of Use
Daily
Weekly