Imagine what could have been!

Nicole Kidman stopped by NBC's The Tonight Show Tuesday to promote Paddington, but it wasn't the first time she spent time with the host. "I don't know if you remember this, but we've met before," Jimmy Fallon reminded her. "Oh, I remember," the Australian actress told the married father of two.

"Do you remember this?" Fallon asked. "It was really embarrassing for me."

"Yeah," Kidman said. "I have not seen you since then, right?"

"This was years ago," Fallon recalled. "Do you want me to tell my version of the story?"

"Yeah, you tell your version," the smiling star replied.

"I'm walking down the street in New York City, and my friend Rick calls me and says, 'Dude what are you doing?'...He goes, 'I have Nicole Kidman with me and she wants to meet you to be in Bewitched or something. I can be in your apartment in like 10 minutes.' I go, 'You're going to bring Nicole Kidman over to my apartment? OK. What do I do?' He goes, 'I don't know. Just get some cheese and crackers or something.' I'm like, 'Cheese and crackers? What are you talking about?'" Fallon, 40, recalled. "I don't have dinner parties. I don't have anyone over to my house. I'm like, 'I have video games and sneakers.'"

VIDEO: Is Nicole Kidman trying to have another baby?

Fallon picked up brie at his local deli. "I didn't even know what that is," he recalled. He wasn't sure why Kidman wanted to meet him, either. "I was on Saturday Night Live or something. I don't really remember what it was." Kidman, 47, said, "I just remember I really liked you...Our mutual friend was like, 'Jimmy really wants to meet you. You can go over to his apartment.' I'm single and I'm like, 'OK!'"

"Yes!" Kidman told him, prompting him to literally jump back in his seat.

"What are you talking about?" he asked. "Did I date Nicole Kidman?"

Kidman then continued the story, telling Fallon, "So, I go over and you're there in a baseball cap and, like—nothing. You wouldn't talk. You didn't say anything. You were like, 'Hey, mmm, mmm, mmm!'"

Still in shock, Fallon said, "I didn't know this was a thing!"

"It was like a hang," Kidman said. "Then you put a video game on or something and I was like, 'This is so bad.' I swear! And you didn't talk at all. So, after about an hour and I half I thought, 'He has no interest, this is so embarrassing.' So, I left, and went, 'OK, no chemistry.' And then I was like, 'Maybe he's gay!'"

A red-faced Fallon then left the set. The two swapped seats and he pretended to be on a doctor's couch. 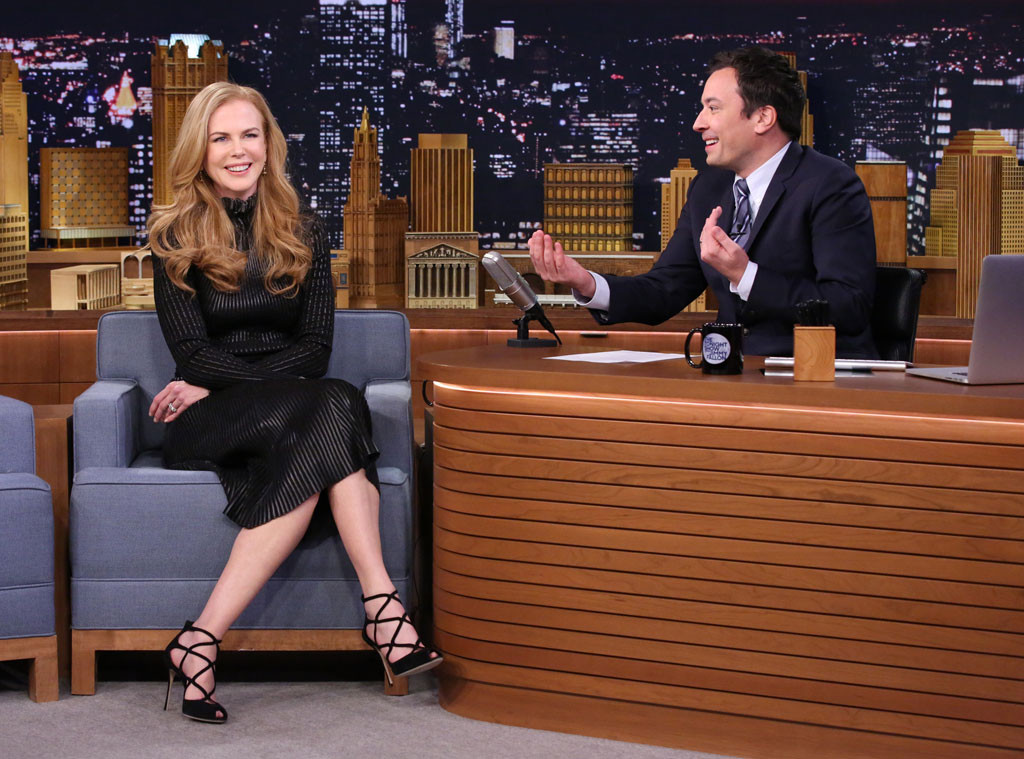 "Do you remember what the apartment looked like?" he asked.

"Not much," Kidman deadpanned. "We weren't meant to be, right?"

"Wow, did you make a good decision!" Fallon said.

"I am in shock right now. I can't believe I dated Nicole Kidman," he added. "This is fantastic!"

"You didn't!" she corrected him.

Later, he told her, "You made a much better decision. Keith Urban is so much cooler than I am."

After some talk about Paddington, they returned to their ill-fated date.

"I remember I got brie cheese..." Fallon said.

"...and corn chips and some old Chinese food," Kidman said, interrupting him. She also revealed that he wore a "baseball hat and some sweats." The comedian laughed at the memory and shouted, "I was not wearing sweatpants! What are you talking about? That's like you went over a Duck Dynasty guy's house! I was not wearing [camouflage] sweatpants. I was dressed probably in a three-piece suit or something."

Kidman stood firm, saying, "You were not interested so you wore sweats and a baseball cap."

"I'm gonna go back to Paddington," Fallon joked. "We're going to edit this out."

They tried to talk about the movie, but as the clip shows, Fallon couldn't ignore their "sexual chemistry."