Jennifer Aniston Writes Her Own Tabloid Headline: "When I'm Pregnant and Married, I Will Let You Know" 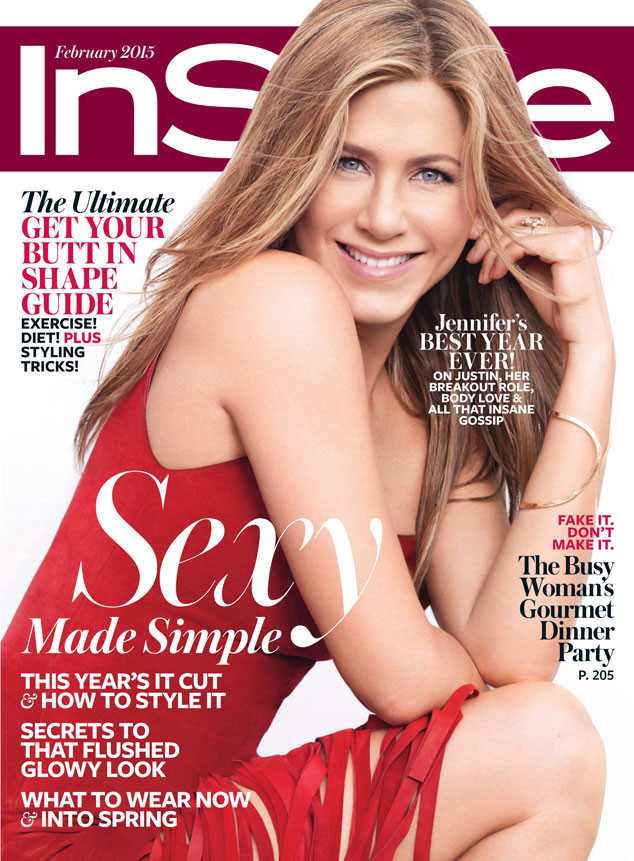 Jennifer Aniston is taking control of her life—the life she reportedly leads, anyway.

The Cake actress has been a tabloid target since her marriage to Brad Pitt ended in 2005. "I realize they need to sell magazines, but it's really getting old," Aniston, 46, says in InStyle's February issue. "What kills me is when friends send me pictures they've taken at a newsstand. One magazine says, 'Desperate and alone,' and the other one says, 'She's eloped!' I mean, at least consult. Don't make yourself look like an idiot. I'm going to be 50 and they're still gonna be saying, 'She's pregnant!'" Though Aniston got engaged to Justin Theroux in August 2012, the tabloids haven't left the Golden Globe nominee alone.

If she could write her own tabloid headline, what would it read? "Oh, that's a tough one. That should be a Justin question. Wait a sec. How's this? 'When I'm pregnant and married, I will let you know.' Not a tabloid publication. Not Bulls--t Times or Crapass Bulls--t Times Weekly. They will not be telling you," Aniston vows. "And by the way, stop stealing my thunder! Let me have the fun of telling that story."

Speaking of Theroux, have he and Aniston set a wedding date?

"There's a big discussion in our house right now: Do you just do it and say screw it? Or do you try desperately to get away with [a secret ceremony] where you don't have any fun because you're hiding in a cave somewhere?" says the actress, whose lavish wedding to Pitt in 2000 cost a reported $1 million. "If we could do it without all the buzzing and the noise...It can be done. Where there's a will there's a way."

NEWS: Jennifer Aniston says tabloids are like a "soap opera on paper"

Suffice to say, Aniston is in her prime.

"It may be harder to shed those extra pounds, but all of this stuff," she says while circling her head with her fingers, "is fabulous. Just thinking about the girl I was at 20-something or even 30-something—there were so many questions, so many worries, so much wasted brain space on things that really don't matter." Turning 40, the Horrible Bosses 2 star says, was a turning point. "I'm a late bloomer. I mean, it's no secret: I've had some challenging companionship," Aniston says, laughing. "I think hitting a wall with that really kind of [helped me grow]. I found a great therapist. Not to sound too 'woo woo,' but I think the self-love piece was really important. And spending a lot of time alone. Having time to ask myself why there was such toxicity in my immediate space at times. Why would I attract that instead of light?"

NEWS: Was Jennifer Aniston too "career-driven" to become a mother?

Aniston met her future husband in 2008 after being introduced through Robert Downey Jr.. "I was on vacation in Kauai with [David Arquette] and [Courteney Cox] and my friend [Mandy Ingber], who's also my yoga teacher. Robert was on the island shooting Tropic Thunder. One night he came over for dinner and brought his friend Justin Theroux. He was the screenwriter on Tropic Thunder. I had never heard of him...I remember thinking, 'Isn't he hot?' But he was very hidden. As he says, for him, 'Itt's winter from the waist down no matter what season it is,' so he was wearing black jeans, combat boots, glasses, and a fedora." At that point in time, Aniston recalls, she was "soooo single. But it was never [a romantic thing]. I just thought, 'What a lovely guy.' He was funny. But he was actually really quiet. I later came to find out that he was just exhausted because he had been writing nonstop, like a little hamster on a wheel. This was his one night off, and he had no personality, but he was very sweet and very overdressed. I was like, 'You must be really shvitzing up a storm in those jeans and combat boots.'"

VIDEO: Jennifer Aniston talks about her tough role in Cake

Aniston and Theroux reconnected in 2011 when they co-starred in the comedy Wanderlust. "We just became very good friends, as did everyone on that set," the actress recalls. "We didn't start dating until the following summer, after he went through a breakup. All of a sudden it was just like, 'Well, you're one of my closest friends and...' Somehow I just saw him in a different light once he was available." Theroux, from the beginning, was different than Aniston's past loves. She jokes, "If I haven't gotten wiser about relationships, then I should be kicked out of life school because I've had some really good training."

The actress describes a typical Saturday night with her fiancé, shares her thoughts on getting Botox, recalls taking an interest in transcendental meditation and more in the February 2015 issue of InStyle.

TAGS/ Jennifer Aniston , Magazines , Celebrities , Top Stories
GET POP CULTURED!
*Email entered incorrectly. Please try again.
By subscribing to our newsletter you agree to the Privacy Policy and Terms of Use
Daily
Weekly