Janice Dickinson Says Bill Cosby Is a ''Monster'' Who ''Raped Me'': Model Breaks Down on CNN as Jill Scott Defends Comedian 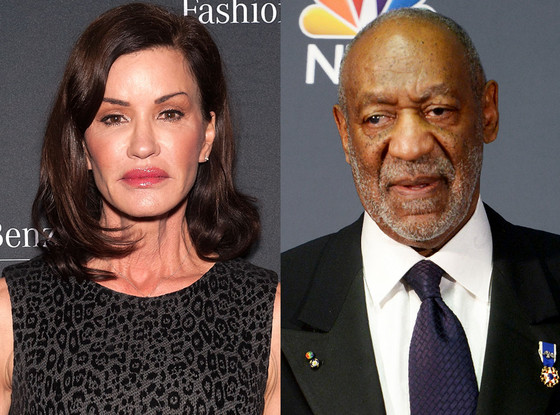 Less than one month after Janice Dickinson appeared on Entertainment Tonight, where she accused Bill Cosby of raping her, the supermodel is speaking out once again in an emotional interview with CNN's Fredricka Whitfield.

The 59-year-old detailed the events that allegedly occurred back in 1982, claiming that Cosby sexually assaulted her before calling the troubled comedian "a monster." Dickinson said that the incident occurred when she was vulnerable and fresh out of rehab during a trip to Lake Tahoe, where Cosby was performing. (After Dickinson's first interview with ET, Cosby's attorney Marty Singer issued a statement calling her allegations "a complete lie.")

"I had menstrual cramps…and he said 'Oh, I've got something for that,' and he gave me a pill," she claimed, noting that the comedian first offered her a glass of red wine, which she turned down.

Asked whether she questioned the medication, the talent agent replied, "I don't remember that. I don't remember. But if he's giving me a pill, I trust the guy."

So, why put so much trust in the former Cosby star? "Because of his demeanor and the promise of career," Dickinson admitted. "I wanted a television career."

After taking the pill, Dickinson says that she began to black out, but she happened to have a Polaroid camera in her possession so she began snapping pictures of Cosby in a patchwork robe (the photos were on display during the interview) before she lost consciousness.

"The last thing I remember was blacking out and Cosby mounting me like the monster he was. And I was thinking, 'What the heck?' I remember passing out, but more specifically waking up," she recalled, fighting back tears. "There was a lot of pain downstairs. There was semen all over me and that my pajama bottoms were off and my top was open and at that point—fight or flight!—I just packed up and got the hell out of there."

PHOTOS: Tragic comedians through the years 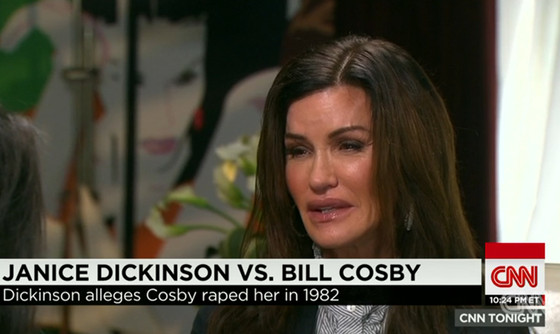 Dickinson is just one of the dozen or so women who, in recent weeks, have accused the actor of sexual assault. Two days before the model shared her story with Entertainment Tonight, Cosby's attorney John P. Schmitt issued this statement: "Over the last several weeks, decade-old, discredited allegations against Mr. Cosby have resurfaced. The fact that they are being repeated does not make them true. Mr. Cosby does not intend to dignify these allegations with any comment. He would like to thank all his fans for the outpouring of support and assure them that, at age 77, he is doing his best work. There will be no further statement from Mr. Cosby or any of his representatives."

Like many of the women who have also come forward, the brunette beauty says she was previously scared to tell her story.

"I remember being humiliated, disgusted, I had revulsion towards Cosby. Cosby was a very powerful man and probably still is. I trusted this man," she explained. "I stuffed it, I compartmentalized it because I was embarrassed." 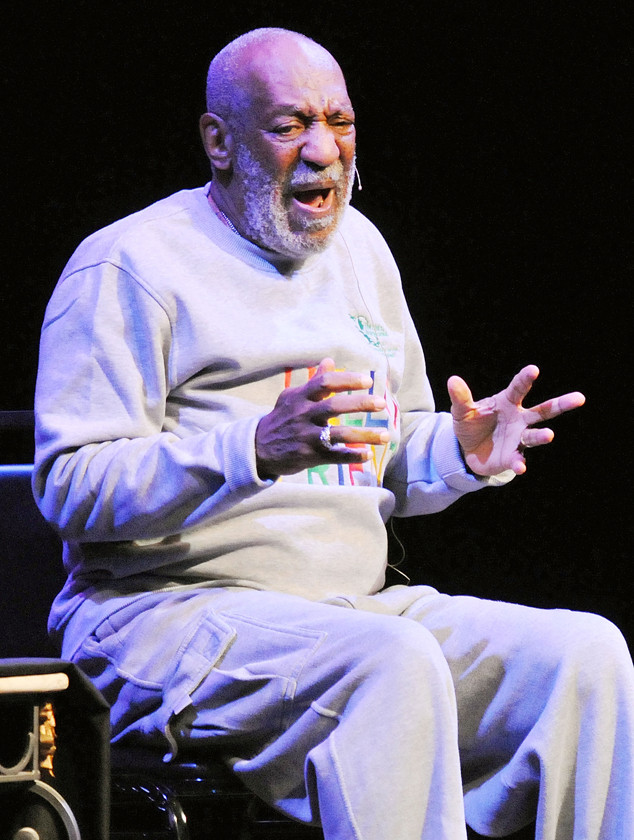 While Dickinson cannot take legal action against Cosby, she still has a message for her alleged attacker. "I would like Cosby to come out and at least acknowledge that he is a pig, he is a monster, and he raped me," she said before the interview concluded.

However, the cameras kept rolling and the actress immediately broke down in tears, appearing distraught after detailing the alleged incident.

Meanwhile, soul singer Jill Scott is speaking out in defense of Cosby on Twitter, engaging in a heated debate with a few of her followers.

@ShelbyKnox oh ok. So they've proven the alleged allegations? I didn't know. Will they also be giving him back the millions he's donated?

@SimplyBerry u know Bill Cosby? I do child and this is insane. Proof. Period.

@KristensWay I'm respecting a man who has done more for the image of Brown people that almost anyone EVER. From Fat Albert to the Huxtables

After posting a number of tweets in defense of Cosby, Scott called rape a "cowardly crime" and urged any victims to seek help immediately.

Rape is a despicable, cowardly crime. If you've been raped- plz do NOT shower, go to police IMMEDIATELY, have a rap kit done. GET EVIDENCE.

TAGS/ Bill Cosby , Legal , Controversy , Top Stories
GET POP CULTURED!
*Email entered incorrectly. Please try again.
By subscribing to our newsletter you agree to the Privacy Policy and Terms of Use
Daily
Weekly