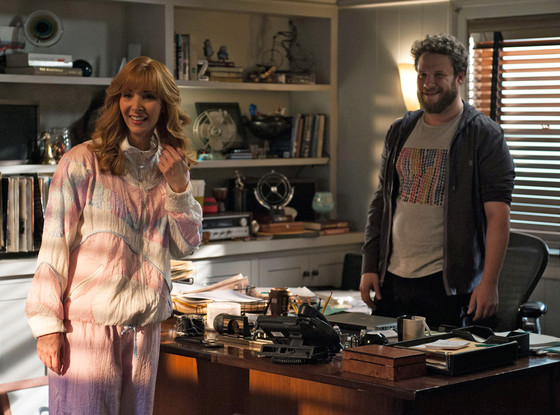 Finding . It. Hard. To. Breeeeeeeathe.

Anyone else dying laughing over tonight's episode of HBO's The Comeback?

If you missed it, run don't walk to HBO Go or your DVR and find that sucker, because it's straight up comedy gold.

In the episode, we learn that Valerie Cherish (Lisa Kudrow) is tasked with a blow job scene for her new HBO series, Seeing Red. The recipient in the scene is none other than Seth Rogen, who is playing Seth Rogen playing her former TV writer/nemesis Paulie G. Got all that?

Tonight marked Seth Rogen's debut on the series, and he was perhaps the most amazing cringe-comedy diffuser of all time, expertly bringing some much-needed warmth and protection to Kudrow's Valerie, who so very rarely catches a break.

But tonight she did, all  thanks to Rogen, who talked the director out of a far more humiliating setup for the blow job scene. (Ultimately, Valerie had to stand between two fully nude women, and also lay her head in Seth's lap, but the anticipation of it all was...rich. And ridiculous.)

Amy B. Harris, the co-executive producer/writer (and also worked on Sex and the City and created The Carries Diaries) spills 7 things to know about tonight's episode, our favorite so far this season:

Will We Get More Sex and the City on TV?

1. How the Blow Job Idea Happened: "It really started as a conversation of, what would the Seeing Red show actually be?" Harris explains. "Why would HBO actually have bought this show? It couldn't be just a network show and it had to be emotionally dark and sort of outrageous. We also talked about when Valerie walked in on Paulie G. getting a blow job in the first season, and we felt like that was something to play around with, and we felt like in his heroine-induced fantasies, that would be something that would come up for him."

2. Paulie G. Might Actually Have a Thing for Valerie (?!):  "I actually think there might be some energy for him around her that he's both attracted to her and sort of hates himself for it," says Harris. "This episode was really a discussion of, is he fantasizing about her?" Say it with me now: Ewwwww....

The Comeback: Where have they been? 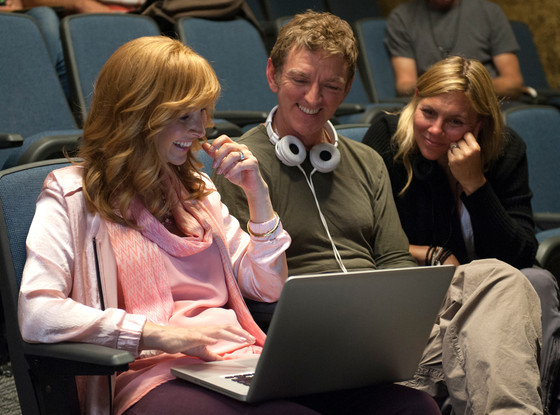 3. The Casting for the Nude Girls Was…Not the Norm for This Show: "That was a hilarious casting session!" Harris says with a laugh. "These lovely women who came in who were braver than I will ever be in my lifetime. It was such an ironic thing because it was me and our director John Riggi who's gay and Michael [Patrick King], who's gay and so it couldn't have been a more safe, unexploitative room.

4. Shooting the Scene Wasn't Actually Uncomfortable. "Not for  me anyway!" Harris laughs. "You'd have to speak to Lisa, but I think she probably felt like, I'm sure it was uncomfortable only because she didn't want those women to be uncomfortable. You know? But I don't think they were, they had beautiful bodies. And they came in to audition. And we put the robes on as soon as they yelled cut. Everyone was very respectful."

How to Bring a Canceled Show Back from the Dead

5. If Seth Rogen Had Said No, The Comeback's Whole Comeback Would Have Been Screwed: The role was specifically crafted for Seth, and there was no backup, Harris reveals. "It would have been a disaster if Seth didn't work out! We really were like, "This is the person' and then if we hadn't have gotten him, we would have had to rewrite the whole part.  We needed someone who was a star in their own right, and having an actor pretending to be a star just would not have worked. Once he said yes and we got our dates pinned down we all looked at each other and said what if that hadn't worked out? It would have been an epic disaster."

6. Seth is Valerie's First True 'Savior': "Seth is the perfect person for this role, because his off screen and on screen persona is so warm and likable," Harris says. "And so the fun irony we brought into this episode is that her protector is going to be this huge movie star who could potentially just protect himself, but decides to protect her. We wanted Valerie to have a win by having this amazing big movie star protect her in that moment, and yet at the end she has to uncomfortable sit with her face in his lap. But it's still so much better than what the alternative would have been. That moment where he says, ‘I've got your back, ginger snaps," you're so happy that someone finally wants to take care of her."

7. There Was Some Improv: "Sort of similarly to the way Lisa works," Harris explains, "Seth's stuff was almost entirely  scripted and yet there were things that would pop up that were very funny and they definitely ended up in the show. His whole thing was, ‘I love this show, you guys know how to write this show, I wanna honor it.' But Lisa and Seth are both pretty fantastic at improv, so if they started adding things in, we weren't like, 'Whoa, whoa, whoa, stop it.' The lines were always said, but they added more."

Amy B. Harris also co-wrote next week's similarly hilarious episode with John Riggi—in which Valerie tries out an improv comedy class at The Groundlings. Check back for more scoop next Sunday!

The Best and Worst TV Comebacks Ever

TAGS/ TV , Top Stories , Watch With Kristin
GET POP CULTURED!
*Email entered incorrectly. Please try again.
By subscribing to our newsletter you agree to the Privacy Policy and Terms of Use
Daily
Weekly