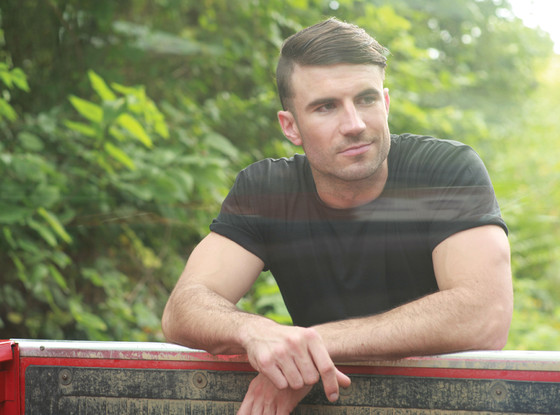 Sam Hunt is not your typical country star. At 6'4", this former University of Alabama at Birmingham quarterback and free agent for the Kansas City Chiefs, is changing country music completely. If you don't recognize Sam Hunt, you probably recognize the songs he's written: Kenny Chesney's "Come Over," Billy Currington's "We Are Tonight" and Keith Urban's "Cop Car."

Sam's single, "Leave The Night On" surpassed 500,000 track sales making it Hunt's first certified Gold record as an artist. His debut album, Montevallo, drops today. With what seems like a quick rise to fame, there's still so much more to know about Sam.

You might think Sam had always been in music, but Sam explained to us, he didn't pick up his first guitar later in life! "Until I was 18, I had never tried to play a musical instrument. When I graduated high school, a friend of mine bought a guitar, and when I went over to his house, I just started tinkering on it. It sparked enough interest and inspired me to pick up a guitar of my own," he tells us. "I went to a pawn shop, in the town where I'm from, bought a cheap guitar, and thought that I could take it off to college."

Sam headed to college with his new purchase, but didn't get to spend a lot of time playing guitar. His football career took up most of his time. So, how did his time in football help him succeed in music?

"I think football is a sport where you learn and become aware of the connection between hard work, success, discipline, and all the things it takes to do well," he says. "So, that was definitely instilled in me through playing ball, through the coaches, and through my own desire to win. That competitive spirit just drives you to do what you need to do to win in football."

Tonight's the last show of our Florida run. We'll be back this fall on the CMT Tour.

That competitive spirit drove him to succeed in Nashville after his NFL career ended, "I didn't want to move to Nashville to just have fun pursuing the idea of doing well and being successful in music."

His college days helped influence his music career in more ways than one. The album takes its name from the town of Montevallo, which is south of Birmingham, where Sam attended school. "I didn't actually live in that town," he says. "I had never visited Montevallo, but right before I left to go to Nashville I met a girl from there. A lot of the experiences I had with her and the relationship I had with her, that inspired a lot of the songwriting on the album."

Sam reveals the girl from Montevallo is the inspiration behind "Cop Car," the hit he wrote for Keith Urban, and includes on his own album. The experience "happened when I was just getting out of college and sneaking into the little airport there, and getting away with it a few times," he dishes. Luckily, "we didn't actually go to jail, just got run off, but they made it very clear that we were not supposed to be there, and not to come back."

Speaking of girls, what does Sam look for when it comes to romance? "That's a tough question. There aren't really any specific qualities I have," he admits. "I just have an open mind to a person that I will connect with in a very unique way. I kind of like that I don't know even know what those qualities are. It's more about just an invisible connection that you can't put your finger on."

But one surefire way a woman can impress Sam? Make him a bowl of his mom's taco soup recipe. He reveals it's his favorite homemade meal and that he could "eat bowls and bowls of it."

TAGS/ Music , 2014 CMA Awards , Top Stories
GET POP CULTURED!
*Email entered incorrectly. Please try again.
By subscribing to our newsletter you agree to the Privacy Policy and Terms of Use
Daily
Weekly