AHS Scoop! Jessica Lange and NPH's Surprising Status, and Why Matt Bomer Is Getting "F—ked Up" 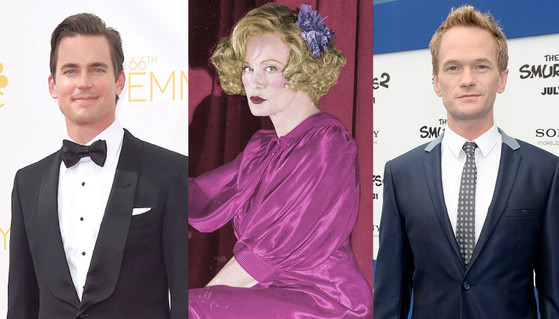 One more day til the Freak Show!

I just chatted with Ryan, along with a few other outlets in an intimate interview, and here are 8 things you fans need to know right away:

1. Jessica Lange Might…Wait for it…Stay! (Dare we dream?!) "I'm never accepting [that she will leave]," Murphy said of the show's cornerstone leading lady, who has said repeatedly that this season will be her last. Murphy hints that she is softening her resolve.

"This is her favorite season without question," he said of Lange. "She said that to me, she has said that publicly, that she feels really reinvigorated in some regards. I really want her to keep her hand in. Does that mean 13 episodes or six or one? What does that mean? She and I will probably have a dinner date over the hioldiays. We always start with the character and she decides from there.

"Before I was met with a really quick no and now I'm hearing, ‘Let's keep talking.' So that's a promising sign….I think if I presented her with the right character, it could work. That's my hope. I'm sending bribes every day!"

2. Murphy Already Knows What Season Five of AHS Will Be. He has reached out to Sarah Paulson who "really loves" her character. And there are easter eggs for fans in the first two episodes of Freak Show that hint at where next season will be. The announcement likely will come in the spring. Maybe. Maybe sooner this year. Murphy is still deciding. Can we vote for now?!

3. Neil Patrick Harris Is Close! "I spoke to Neil a week ago," Murphy revealed. "He was fresh off his wedding. Obviously we have worked together before, I'm working on something and hopefully we will talk net week. He's game. He had very specific ideas of what he wanted to do, and I had very specific ideas, so we're melding them. He's awesome, one of our great entertainers, and I would love to see him and Jessica Lange go at it in some intriguing way. Because of his schedule, something we're thinking about , maybe one episode and then another one later on. "

4. Matt Bomer's Guest Spot Is "Really F—ked Up": "I love Matt Bomer and I'm very close with him in real life," Murphy explained. "Episode five, we wrote this very strange, odd episode where something really horrible happens. We've never done this before but there's a seven page scene between  Michael Chiklis and Matt, and I texted Matt and I told him ‘I'm writing this character and said you have first right of refusal. It's really fucked up. ‘And he wrote back 30 seconds later, ‘I'm in.' It's maybe one of the most disturbing things we've done. Matt was game. He likes to do the opposite of what he has done. It's a true horror scene. He'd never played anyone like this before. And I know he really enjoyed being on the set with those actors. He said it was demented Tennessee Williams. I would love if he would consider coming on and being a regular on the show, just because I think he's so talented." Seconded! 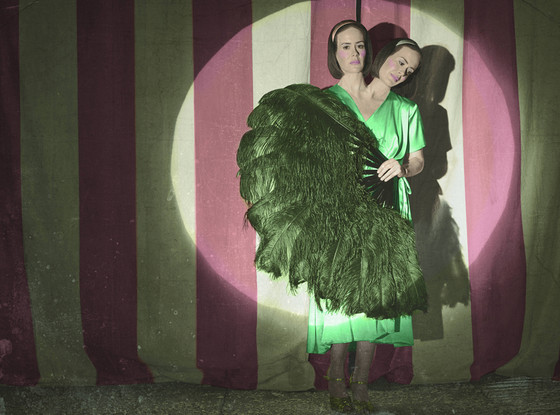 5. Sarah Paulson has "the most challenging role of any actor ever". Murphy went on at length about the challenges of shooting a character with two heads. (Paulson plays conjoined twins.) And basically....We should just give her the dang Emmy now!

" Most producers do two people conjoined at the chest with two actors," Murphy explained. "We thought about that, but I really wanted Sarah to do both roles. If an average scene takes 5 hours, every time Paulson is in a scene it takes 12 hours. We have a prosthetic head for Bet and Dot. She will record her dialogue with an earwig so she literally has to do scene with herself. She is so dedicated, she didn't want someone off camera to do it. We do that and we change the head. And that is the close shot. And then you have to do it all over again for a master. And then all over again for the green screen. So it's very very time consuming."

"She loves doing it," he added. "She has never lost the faith… It's really two people with different attitudes and facial expressions. She has to be left handed and right handed, she has to learn how to walk in a special way. And it's one of the best things, if not the best thing she's ever done. It's the most challenging thing I've ever seen any actor do ever."

6. What Ryan Murphy hopes to accomplish this season with the AHS audience: "I hope they are wildly entertained…and I hope they are scared s—tless. I hope they also learn a lot about discrimination and prejudice that other people experience, and that applies to any minority group.  We do a lot of research every season and this season, and were very true to the true story of what happened to these carnival people. They were at one point the biggest stars, and then later some of them were killed, some of them were institutionalized, and I think what happened to these people is a horror story. I hope people take away what these people have gone through, which I find really moving."

7. The Special-Ability Actors Have Become Family. Murphy talked at lengthy about casting the world's smallest woman (Jyoti) and the only woman in the history of the world to suffer a rare genetic condition that left her legless, to have two children (Rose Siggins). When Rose was recently in the hospital, Jessica and Sarah when to the hospital to visit her and she burst into tears. She's a great lady, she's really sweet, and we put a lot of her own personal stories into her character."

8. American Horror Story could go on without Ryan Murphy some day. "One of the great joys of doing this show because you can pause when it ends and step back and me as an artist to be able to step into different things than, this show can go 10 years 15 years. It's never ending in many ways. I may not always be doing it, but someone could come in and do 13 episodes and make it their own. That was the idea from the beginning."

Check back for more AHS: Freak Show scoop tomorrow morning on E! Online! And tweet me at @kristindsantos during the Freak Show premiere on Wednesday night. I'll be rewatching it live and in need of some company…and possibly medication. BE AFRAID.

CLICK NOW: 15 new shows everyone is loving and hating so far this fall!

TAGS/ TV , Top Stories , Watch With Kristin , American Horror Story
GET POP CULTURED!
*Email entered incorrectly. Please try again.
By subscribing to our newsletter you agree to the Privacy Policy and Terms of Use
Daily
Weekly