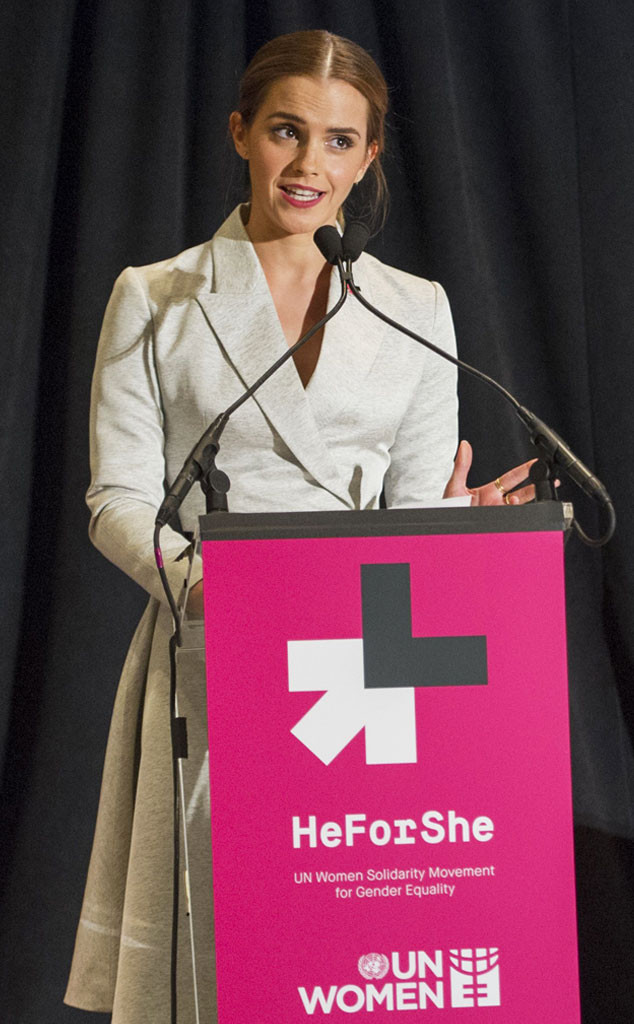 Emma Watson has Hollywood under her spell.

The Harry Potter actress, who is also a U.N. Women Global Goodwill Ambassador, delivered an inspiring speech about feminism at the United Nations Headquarters in New York City Saturday. While addressing world leaders, the Brown University alum said, "We want to end gender inequality, and to do this, we need everyone involved...We want to try to galvanize as many men and boys as possible to be advocates for change and we don't just want to talk about it. We want to try and make sure that it's tangible."

The Bling Ring actress, 24, explained she recently "realized that fighting for women's rights has too often become synonymous with man-hating. If there is one thing I know for certain, it is that this has to stop."

"For the record, feminism, by definition, is the belief that men and women should have equal rights and opportunities," Watson said. "It is the theory of the political, economic and social equality of the sexes."

Watson also said she's noticed that women choosing not to identify as feminists. "Apparently, I am among the ranks of women whose expressions are seen as too strong, 'too aggressive,' isolating and anti-men, unattractive, even," she shared. "Why has the word become such an uncomfortable one?"

The point of the #HeForShe campaign, she said, is to make people "see gender as a spectrum instead of two sets of opposing ideals." Watson added, "We should stop defining each other by what we are not and start defining ourselves by who we are. We can all be freer, and this is what HeForShe is about."

NEWS: Why Shailene Woodley is not a feminist

"It's about freedom," the Perks of Being a Wallflower star added. "I want men to take up this mantle so their daughters, sisters and mothers can be free from prejudice but also so their sons have permission to be vulnerable and human, too, and in doing so, be a more true and complete version of themselves."

Douglas Booth, Watson's Noah co-star, was one of the first to support her campaign on Facebook. The actress also inspired a number of other famous celebrities, including Zooey Deschanel, Joseph Gordon-Levitt, Simon Pegg, Maria Shriver and James Van Der Beek. Here are their responses to #HeForShe:

I am a passionate supporter of gender equality. @EmWatson @HeForShe @UN_Women pic.twitter.com/IpudHsNpu3

I consider myself a Feminist & I wanna know what #Feminism means to you. Watch+Contribute: http://t.co/IuNphYG8Nq pic.twitter.com/fLWkz81eMy

Listen up! RT@HeforShe "If you haven't seen the speech yet, watch it now! ?@EmWatson: #heforshe speech. http://t.co/xjL0CfeePb??

Husband to a wife, father to a daughter, son to a mother. You bet I'm on board, @EmWatson! #heforshe pic.twitter.com/5SyIKIbCZo

The need for gender equality & the REAL meaning of feminism, beautifully articulated by @EmWatson : http://t.co/5vkm6z2bqz #HeForShe

Watch this, rewatch this, retweet this. I applaud @EmWatson http://t.co/Ww52Ttab1K ???? #HeForShe x

Proud to support the #HeForShe campaign of @UN_Women pic.twitter.com/BVMoJ4oJph

Equality for all.... #HeForShe

TAGS/ Emma Watson , Celebrities , Top Stories
GET POP CULTURED!
*Email entered incorrectly. Please try again.
By subscribing to our newsletter you agree to the Privacy Policy and Terms of Use
Daily
Weekly