Emma Watson Gives Emotional, Powerful Speech at U.N. About Gender Inequality—Check out a Transcript and a Video 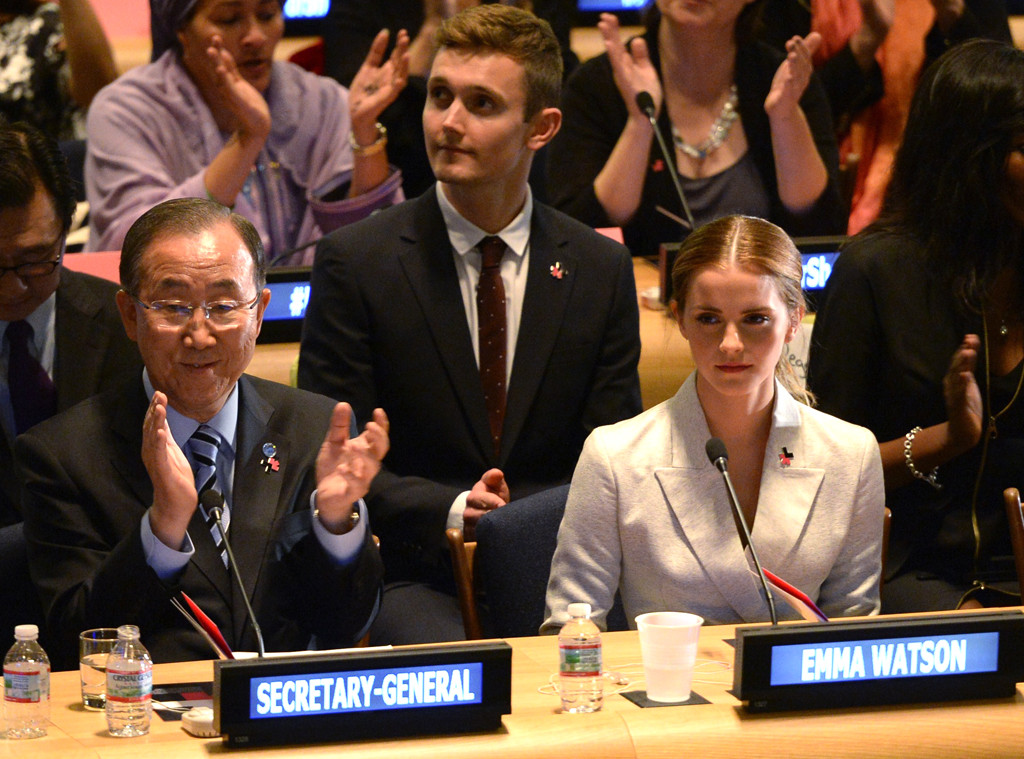 The event, which aims to "mobilize men against gender inequalities," was hosted by Wolf Blitzer and was also attended by 24 star Kiefer Sutherland and Oscar winner Forest Whitaker. Watson, who famously played smart, headstrong Hermoine Granger in the Harry Potter films, was commended by United Nations Secretary-General Ban Ki-moon.

"She's been using her magic wand in her movie. I hope she will use [her] magic want to stop violence against women," he said to Watson, drawing laughs and a lovely smile from the actress. "Again, thank you very much for shining your spotlight on this life-saving work."

Check out a transcript of Watson's speech below.

"Today, we are launching a campaign called HeForShe. I am reaching out to you before we need your help. We want to end gender inequality and to do this, we need everyone involved. This is the first campaign of its kind at the UN. We want to try to galvanize as many men and boys as possible to be advocates for change and we don't just want to talk about it. We want to try and make sure that it's tangible."

"I was appointed as Goodwill Ambassador for U.N. Women six months ago and the more I've spoken about feminism, the more I have realized that fighting for women's rights has too often become synonymous with man-hating. If there is one thing I know for certain, it is that this has to stop."

"For the record, feminism, by definition, is the belief that men and women should have equal rights and opportunities. It is the theory of the political, economic and social equality of the sexes. I started questioning gender-based assumptions a long time ago."

"When I was 8, I was confused about being called 'bossy' because I wanted to direct the plays that we would put on for our parents. But the boys were not. When at 14, I started to be sexualized by certain elements of the media, when at 15, my girlfriends started dropping out of their beloved sports teams, because they didn't want to appear 'muscle-y,' when at 18, my male friends were unable to express their feelings, I decided that I was a feminist. And this seems uncomplicated to me. But my recent research has shown me that feminism has become an unpopular word."

"Women are choosing not to identify as feminists. Apparently, I am among the ranks of women whose expressions are seen as too strong, 'too aggressive,' isolating and anti-men, unattractive, even. Why has the word become such an uncomfortable one?"

"But sadly, I can say that there is no one country in the world where all women can expect to receive these rights. No country in the world can yet say that they have achieved gender equality. These rights, I consider to be human rights but I am one of the lucky ones, my life is a sheer privilege because my parents didn't love me less because I was born a daughter. My school did not limit me because I was a girl. My mentors didn't assume that I would go less far because I might give birth to a child one day. These influencers are the gender equality ambassadors that made me who I am today."

"They may not know it, but they are the inadvertent feminists who are changing the world today. We need more of those and if you still hate the word, it is not the word that is important. It's the idea and the ambition behind it. Because not all women have received the same rights that I have. In fact, statistically, very few have been."

"In 1997, Hillary Clinton made a famous speech in Beijing about women's rights. Sadly, many of the things that she wanted to change are still true today. But what stood out for me the most was that less than 30 percent of the audience were male. How can we affect change in the world when only half of it is invited or feel welcome to participate in the conversation?"

"Men, I would like to take this opportunity to extend your formal invitation." [Applause break] "Gender equality is your issue too. Because to date, I've seen my father's role as a parent being valued les by society despite my needing his presence, as a child, as much as my mother's. I've seen young men suffering from mental illness, unable to ask for help, for fear it would make them less of a men—or less of a man. In fact, in the U.K., suicide is the biggest killer of men, between 20 to 49, eclipsing road accidents, cancer and coronary heart disease. I've seen men made fragile and insecure by a distorted sense of what constitutes male success. Men don't have the benefits of equality, either."

"It is time that we all see gender as a spectrum instead of two sets of opposing ideals. We should stop defining each other by what we are not and start defining ourselves by who we are. We can all be freer and this is what HeForShe is about. It's about freedom. I want men to take up this mantle so their daughters, sisters and mothers can be free from prejudice but also so their sons have permission to be vulnerable and human, too and in doing so, be a more true and complete version of themselves."

"You might think, 'Who is this Harry Potter girl? What is she doing at the U.N.?' And it's a really good question—I've been asking myself at the same thing. All I know is that I care about this problem and I want to make it better. And having seen what I've seen and given the chance, I feel my responsibility to say something. Statesman Edmund Burke said all that is needed for the forces of evil to triumph is for good men and women to do nothing."

"In my nervousness for this speech and my moments of doubt, I've told myself firmly, 'If not me, who? If not now, when?' If you have similar doubts when opportunities are presented to you, I hope that those words will be helpful because the reality is, if we do nothing, it will take 75 years or for me, to be nearly 100, before women can expect to be paid the same as men for the same work—15.5 million girls will be married in the next 16 years as children and at current rates, it won't be until 2086 before all rural African girls can have a secondary education."

"If you believe in equality, you might be one of those inadvertent feminists that I spoke of earlier and for this, I applaud you. We are struggling for a uniting word but the good news is that we have a uniting movement. It is called HeForShe. I am inviting you to step forward to be seen and to ask yourself, 'If not me, who? If not now, when?' Thank you very, very much."

Watch a video of the event below.

Douglas Booth, who appeared with Watson in the movie Noah, posted a photo on Facebook showing his support for her former co-star.

Watson was announced as a U.N. Goodwill Ambassador in July. She joins the likes of Angelina Jolie and Katy Perry.

After the event, Watson attended an after party (see photos, below). 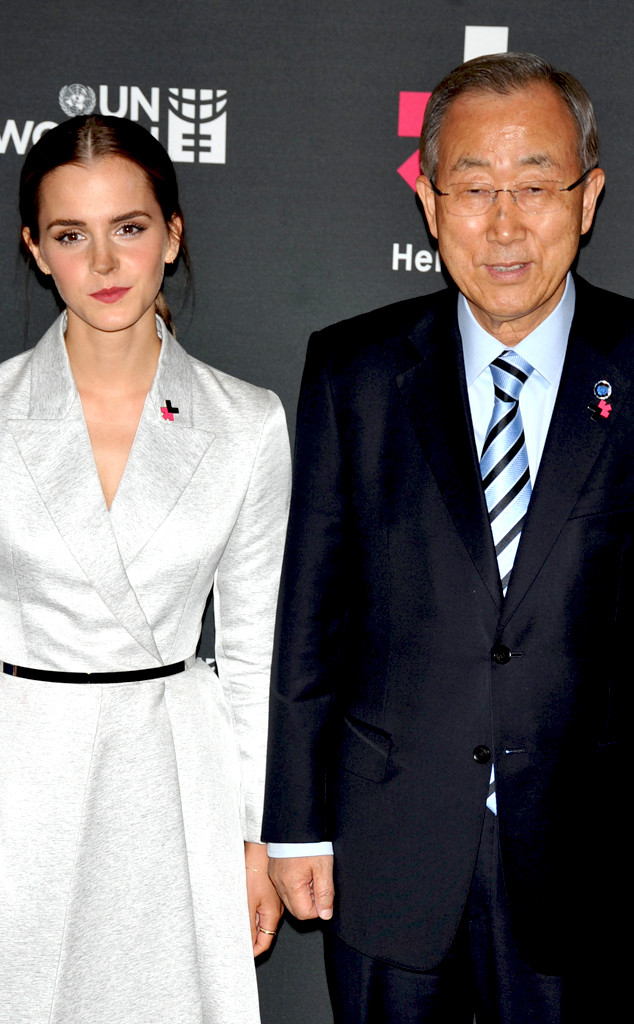 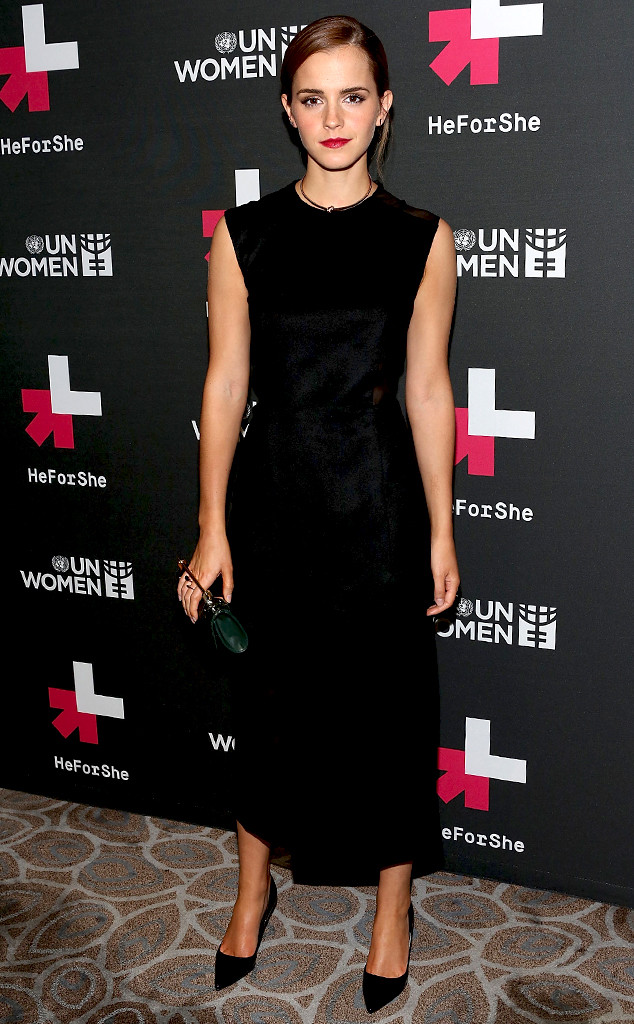 TAGS/ Top Stories , Emma Watson
GET POP CULTURED!
*Email entered incorrectly. Please try again.
By subscribing to our newsletter you agree to the Privacy Policy and Terms of Use
Daily
Weekly