The Awkward Midseason Trailer Is Finally Here! Plus, Get Scoop on New Characters and New Problems Heading Jenna's Way 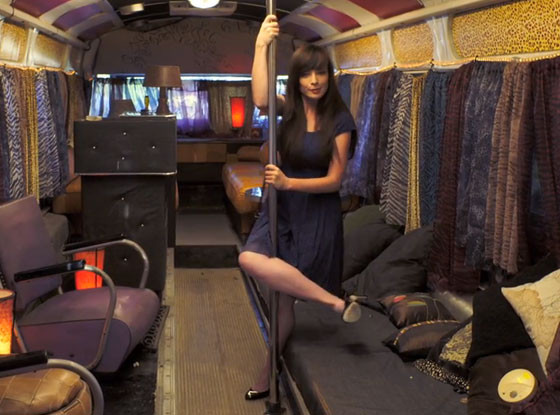 After hurrican Eva (Elizabeth Whitson) blasted through Awkward in the first half of season four, leaving a devastated Jenna (Ashley Rickards) and Matty (Beau Mirchoff) in her wake, we've been anxiously awaiting the second half of the season to find out if the psycho-stalker really is preggers.

She can't really have Matty's bun in her oven, right?!

We couldn't wait for the midseason premiere of Awkward to air so we went straight to the showrunners, Chris Alberghini and Mike Chessler, to get some answers pronto. And unfortunately, they confirmed one of our biggest fears.

"At the end of the midseason finale, we got some pretty definitive proof. Eva went in with the test and came out with a positive test result," Alberghini tells E! News. "There seems to be some pretty clear proof that she's not faking it."

But at least we can still hold onto hope that the baby isn't Matty's!

In our chat with the Awkward bosses, they revealed that the back half of season four will feature some major relationship shake-ups, shocking hook-ups, mature decisions and some interesting new characters. But before we dive deep into what's coming up on MTV's quirky comedy, E! News can exclusively reveal the first look at the midseason premiere. Watch the new trailer below:

We'll let you catch your breath from all that new info that just came your way. Just kidding, we've got even more scoop for you to digest! Sorry we're not sorry (you'll thank us later).

When Awkward returns, there won't be any major time jumps...thank goodness! "When we come back, we pick up just a couple of days after the finale," Alberghini says. "They're back in school, back from the ski trip."

Chessler reveals that Eva's pregnancy is going to (obviously) be a huge problem for Jenna. "That's going to affect Jenna especially because she's caught between trying to be a good friend to Matty, her complete distrust and dislike of Eva, and her own anger and resentment because she believes that Eva has cost her her relationship with Luke [Evan Williams]," Chessler says. "Jenna's in a really difficult place because she's still struggling with what to do with what happened with Luke, and at the same time, wanting to be a good friend to Matty but feeling like that may not be possible."

But that doesn't mean Jenna will place all the blame on Eva and Matty for what happened with Luke. "Jenna is actually trying to be an adult and not blame Matty for her breakup with Luke and not blame Eva," Alberghini says. "She's trying to be accountable to her own actions and that's part of her struggle this season. As for Luke, she's going to see clarity about whether or not that relationship is over or not. She's not going to give up that easily."

Chessler adds that Jenna will remain "optimistic" that she can still patch things up with Luke, though he wouldn't reveal whether or not that's a wise outlook for her to have. But here's some consolation: the writers love what Luke brings out in Jenna, so hopefully we'll get to see more of him!

VIDEO: Watch the first 5 minutes of Lifetime's Saved By the Bell movie As for BFFs Jenna and Tamara (Jillian Rose Reed), the rest of season four won't be a smooth ride for their friendship.

"I think they're going to be tested as they get further along into their journeys of making decisions about college," Alberghini says. "There are also going to be other things that go on that really does test their friendship."

Exhibit A: new character Owen (introduced in the trailer above). "Owen is somebody that both Jenna and Tamara become entangled with and it causes a lot of conflict on many fronts," Alberghini teases. Uh oh, we don't like the sound of that!

As for what kind of senior year events we'll get to see in the back half of the season, break out those bikinis and sunglasses, because both Chessler and Alberghini reveal that the finale will end with spring break!

"We also have finals coming up for the last semester that counts for college transcripts," Alberghini says. "Everyone's trying to ace their last set of exams, there will be all-night study grinds and tensions will run high. We'll have a Valentine's Day event and Career Day which is kind of terrifying."

PHOTOS: 19 TV characters that stuck around way longer than they were supposed to

TAGS/ Awkward , TV , Top Stories , Watch With Kristin
GET POP CULTURED!
*Email entered incorrectly. Please try again.
By subscribing to our newsletter you agree to the Privacy Policy and Terms of Use
Daily
Weekly