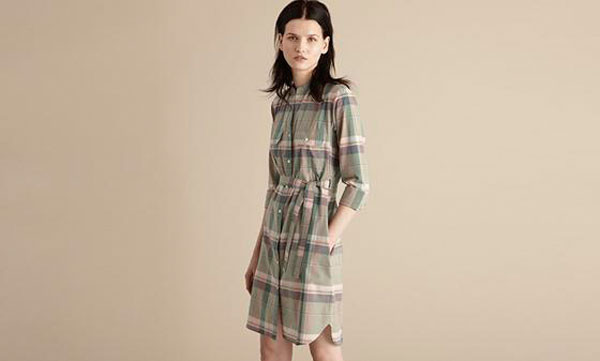 While the Internet is no stranger to thigh gap scandals, it seems that retailer the Gap has now found itself immersed in the too-skinny debate.

The popular clothing company has been on the receiving end of criticism as of late after the Gap tweeted a photo of a super-skinny model wearing a pastel plaid dress.

"Dress up your days in pastel plaid. #since1969," read the caption to the pic, which features the pin-thin model.

The image sparked an endless amount of controversy from the Twitterverse, with some users defending the brunette beauty's frame, while others expressed outrage over the controversial shot.

Seriously, @Gap? In what world do people look like this? Perhaps you could select models who represent regular gals & not a skeletor ghost.

@Gap @AndreaKcc Doesn't the Gap feed it's models? Seriously she looks ill. Please use healthy looking women in your ads next time.

@Gap that girl needs a cheeseburger

READ: Everything you need to know about the fake "bikini bridge" trend

Others, however, jumped to the model's defense and accused the social media world of "skinny-shaming" the starlet.

I get that the GAP uses extremely thin women in some adverts, but body shaming the model (and other naturally small/slight women) is: NO.

@Gap Why is everyone so quick to call a skinny woman anorexic? When you are just built thin, no amount of binge eating changes your size.

@Gap stand up for this model. There are real women who wear size 0, like me, we don't have an eating disorder. Why is being skinny taboo?

Following the plethora of critical comments, the model's husband, director Daniel Ralston, weighed in on the skinny scandal and insisted that his wife simply has trouble putting on weight.

@heylaurenbeck I don't know you IRL but people say this to my wife all the time and it's just as hurtful as telling a fat person to diet.

Gap has since responded to the controversy via a statement to E! News. "Our intentions have always been to celebrate diversity in our marketing and champion people for who they are," Edie Kissko, Gap Inc. spokesperson said. "Upon reflection, we understand the sensitivity surround this photograph. Customer feedback is important to us and we think this is a valuable conversation to learn from."

It's also worth noting that the retailer's website features a different model sporting the same dress. According to the site, the model is 5-foot-10 inches with a 25-inch waist and is wearing a size small.

Do you think the model is too thin or is society simply skinny-shaming? Hit the comments to weight in!

TAGS/ Controversy , Models , Top Stories
GET POP CULTURED!
*Email entered incorrectly. Please try again.
By subscribing to our newsletter you agree to the Privacy Policy and Terms of Use
Daily
Weekly