YouTube Star Timothy DeLaGhetto Surprises His Parents by Paying Off Their Mortgage—Watch the Sweet Video! 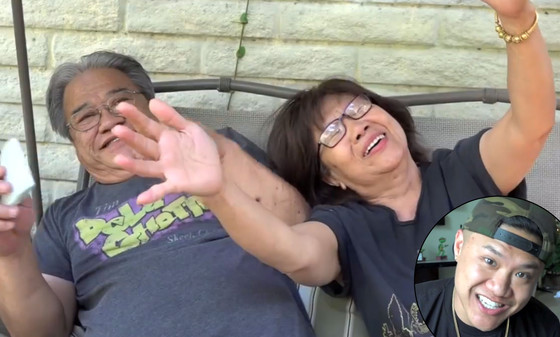 Grab the Kleenex. No, seriously.

YouTube star Timothy DeLaGhetto is currently up for the Best Son Award (and probably the frontrunner) after he gifted his parents with the surprise of a lifetime. The rapper and funnyman showed a more intimate and heart-warming side when he shared a video of himself fulfilling a promise he made with his parents long ago.

"My family and my parents are a big part of who I am as a person and why I do what I do," Tim says in the video. "I get my sense of humor from them and I'm just so grateful that they've raised me with so much love and so much open minds and one of the main reasons I go so hard at this entertainment grind...is so they don't have to work so hard, because they work so hard," he continued, adding that he promised his parents he would one day pay off the house.

And that day came.

WATCH: This Adorable 5-Year-Old Can't Stop Crying Over the Fact That Her Baby Brother Is Growing Up

DeLaGhetto, whose excitement could be felt through the video, handed his parents a check for—wait for it—$210,000! His parents were completely shocked, athough his father, Kongkiat Chantarangsu, said, "I knew you could do it."

His mother, Sukhon Chantarangsu, on the other hand, seemed so stunned that she didn't quite realize what just happened. But once it set in and Tim explained to her that the house is now paid off, the tears began flowing. And that's when we couldn't help but weep, too.

"I always told them I would buy them a house or pay off the house ever since I was a little kid. When I quit school to pursue the whole entertainment thing, and they saw me working long nights on shoots and editing videos, I wanted them to know that it was for a reason. That's when it became a serious mission," Tim tells E! News.

"When I handed them the check I was just super anxious," he added. "I knew my dad was already expecting it, because I had been asking a lot of questions about the mortgage recently. When the camera was off, [my mom] told me, 'Now I can finally take a break,' and that's when it all hit me, cuz they've been working so hard all these years."

MORE: A 7-year-old boy started a lemonade stand and raised $55,000 for his best friend's surgery

As if that wasn't generous enough, Tim also paid off the bank mortgage for $130,000.

The Wild 'N Out star, who dropped out of college five years ago to pursue an entertainment career, added, "They always wanted me to get a degree, but when everything started taking off, they realized that that plan would have to pushed aside for a bit."

So what's DeLaGhetto saving up for now? "Now I'm just gonna relax," Tim tells E! News. "Maybe buy some new socks or go to In N Out, or maybe start saving for a ring because my parents really want grandkids."

LOL! Watch the sweet clip below to see it all go down: