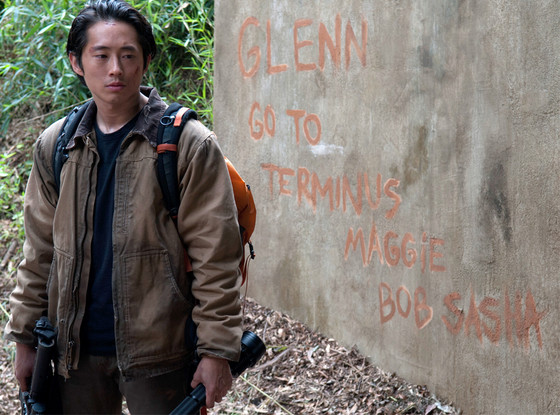 When we last saw our merry band of zombie apocalypse survivors on The Walking Dead, they were in a tight spot.

After making their way to Terminus, a supposed sanctuary, it was anything but. They were shot at, robbed and forced to huddle in a dark train car. Talk about a finale. So what's next? We can assume walkers, action and some craziness, but let's let Steven Yeun take it away.

"I can't give too much away ‘cause it's pretty brutal. I will say the group is evolving, the group is not a group to be messed with anymore. I think last year where we left off with Rick saying ‘They don't know who they are screwing with' is absolutely right," Yeun told E! News while promoting his new film I Origins. "These people have gotten through quite a bit and they persevered over a lot and they lost countless lives, but at the same time, the people that have continued to live on have become stronger. You kind of don't want to mess with these guys. I will leave it at that!"

It's safe to say Glenn (Yeun), Rick (Andrew Lincoln), Michonne (Danai Gurira) & Co. get out of the dark train car, but at what cost? "I don't know if we will be able to show everything," Yeun told us.

"I remember a couple of scenes I would look over at what was going on in the scene and I would be like, ‘What the eff? What are we doing? How is this legal? It's grounded and real, too; it's not like torture or gore for no reason," he said. "It's literally, that is what would happen and we are trying to show it. It would not work on network television, let me tell you that."

After much of the second half of the fourth season apart, The Walking Dead will see the cast of characters reunited again, tackling on a common threat. Yeun said it's been "awesome" to be together again.

MORE: Sneak peek at the new season of The Walking Dead 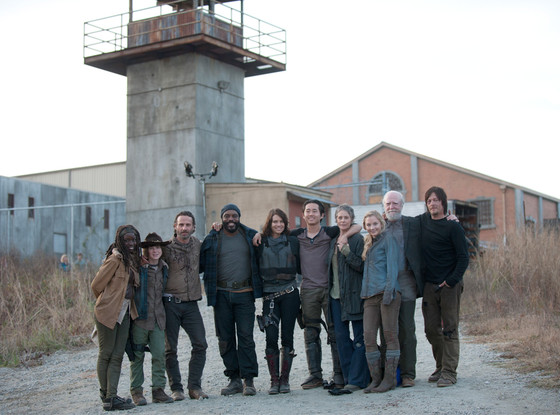 "That's the heart of the show; any time we are split apart it is rough," he said. "Its great to be together."

But will the time together be limited? Rumors have swirled about the fate of Glenn during the fifth season. The Walking Dead is a show where truly no character is safe, anybody is expendable. When asked to comment on the rumors, Yeun took a deep breath before answering. "Ugh, I mean," he paused. "Sometimes it's rough, I mean sometimes its awesome. We will see what happens, yeah."

When he's not battling the undead, Yeun said he's become close with costars Lincoln and Norman Reedus. "To be honest, all of us are really tight and we all try to hang out when we can. And I love the idea of art imitating life and life imitating art, and it almost happens in every single scenario that I've been in. That's the joy of this biz, to walk away with lasting friendships."

The Walking Dead returns to AMC in October. I Origins hits select theaters on Friday, July 18.

PHOTOS: TV you have to watch this summer!

TAGS/ TV , The Walking Dead , Watch With Kristin , Top Stories
GET POP CULTURED!
*Email entered incorrectly. Please try again.
By subscribing to our newsletter you agree to the Privacy Policy and Terms of Use
Daily
Weekly