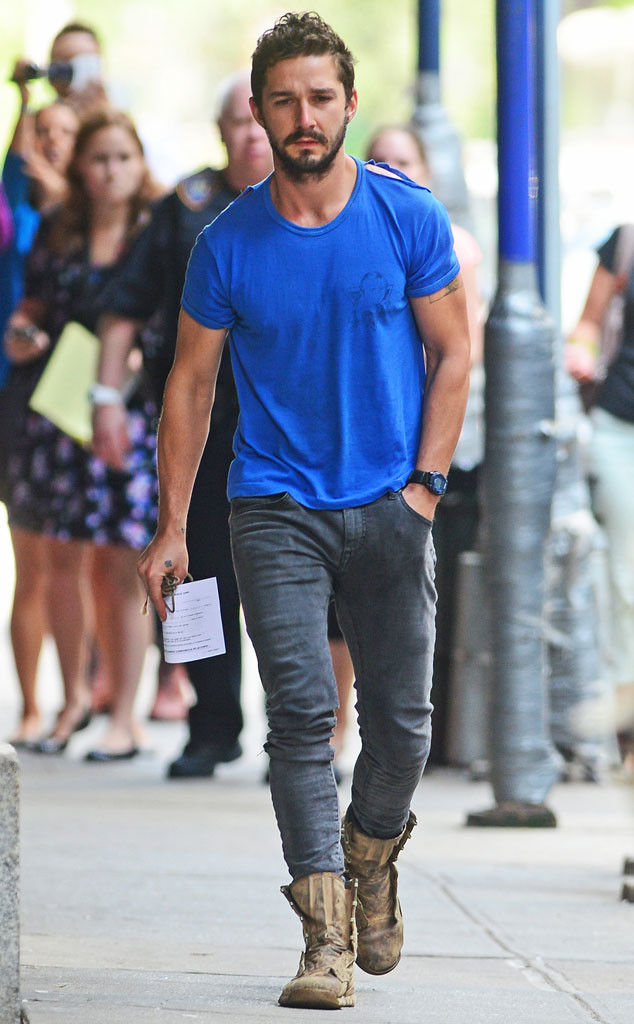 While Shia LaBeouf may argue that he is not famous anymore, we beg to differ, because the actor was arrested in New York last night—and it's all over the news.

The 28-year-old Fury star was arrested and charged with two counts of disorderly conduct, one count of criminal trespassing and one count of harassment after disrupting a performance of Broadway's Cabaret on Thursday night.

After being escorted out of the play, he was taken into custody and transported to the Midtown North station and was arraigned this morning at 10 a.m. at Midtown Community Court.

The Transformers star was released on his recognizance, and his next court date is scheduled for July 24. But what caused the troubled actor to lash out at cops and what was he doing prior to the play? Here is a timeline of events:

VIDEO: Is Shia LaBeouf totally out of control?

• Prior to attending the performance of Cabaret at Studio 54, LaBeouf was spotted at the Iguana Club, a Mexican restaurant located next to the theater in NYC. A woman who was approached by LaBeouf after he left the club tells E! News that the actor said he had been drinking double margaritas and was alone.

• LaBeouf, who, according to our eyewitness, appeared to be visibly drunk, proceeded to then stop on Broadway and began harassing customers outside a store and cursing non-stop. "He wasn't right in the head. His shirt was ripped and he stunk," our insider said.

• After he eventually left, the actor returned to 54th street, where he was seen walking around aimlessly, according to an eyewitness.

• The troubled actor, who was wearing a ripped blue T-shirt, skinny jeans and unlaced boots, was then seen chasing a homeless man on the streets. While it's unclear what provoked the confrontation, reports state he either wanted a baseball cap or a bag of McDonald's food from the man. 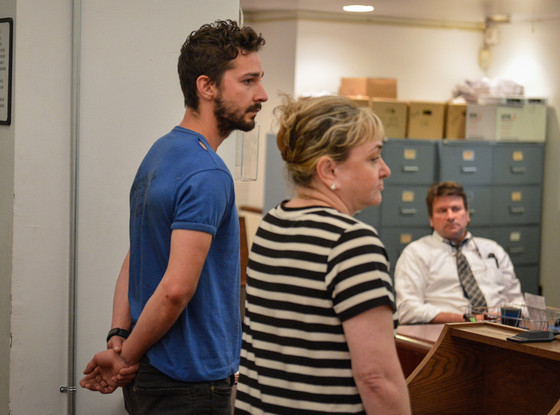 • After his public chase-down, LaBeouf proceeded to Studio 54 to attend a performance of Cabaret. A source who was inside the theater tells E! News, "Shia was smoking (which is clearly not allowed), and whooping and hollering at very inopportune moments (like shouting 'Yeah!' after dramatic moments, clapping before songs began instead of waiting until after they were over, etc.)." The NYPD later confirmed to E! News that Shia was inside Studio 54 where he was being disruptive and smoking cigarettes. Security escorted him out. When police arrived, he was being disorderly. He was taken into custody and was transported to the Midtown North station. Additionally, the Cabaret rep told E! News, LaBeouf "was disruptive during act one and escorted out of Studio 54 at intermission."

• According to the police complaint, while being escorted out of the theater in handcuffs, Shia screamed at Studio 54 security guard Carlos Ortiz, saying "F--k you. This is f--king bullshit. Do you know my life? Do you know who the f--k I am? Do you know who I am?"According to a complaint filed by Ortiz, Shia also split in Carlos' direction and the guard observed the actor's spit landing at his feet.

• LaBeouf was subsequently arrested, taken into custody and transported to the Midtown North station, where his troubles only continued. According to NBC News, prosecuters allege that he told a police officer: "I'll end your life. Do you know who I am?" before he launched into an expletive filled-rant which included a homophobic slur.

• This morning, LaBeouf was arraigned at Midtown Community Court around 10 a.m. in New York City. He was then released on his recognizance, and his next court date is scheduled for July 24.

• The 28-year-old actor left the precinct looking disheveled and wearing the same outfit he was seen sporting on Thursday. The former Disney Channel star walked to a hotel several blocks away and declined to speak with reporters on the scene.

TAGS/ Shia LaBeouf , Legal , Arrests , Top Stories
GET POP CULTURED!
*Email entered incorrectly. Please try again.
By subscribing to our newsletter you agree to the Privacy Policy and Terms of Use
Daily
Weekly