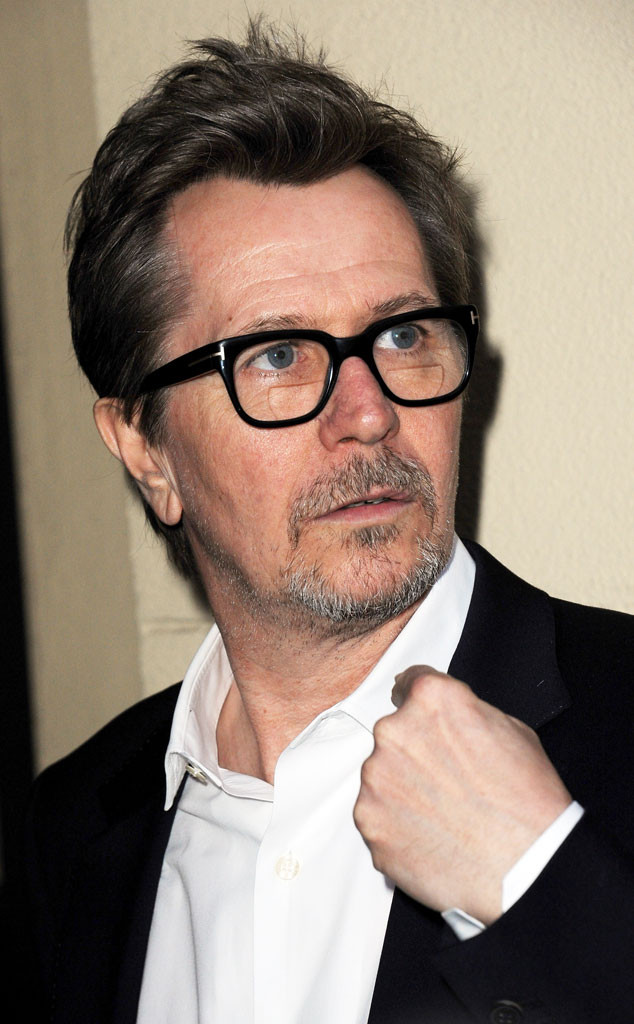 For better or worse, Gary Oldman isn't afraid to speak his truth.

The RoboCop actor, 56, is profiled in Playboy's July/August 2014 issue, where he rants about the nature of Hollywood politics, seemingly accuses the Hollywood Foreign Press Association of corruption and more.

"I've learned over the years that people get upset when they tell you something is their favorite movie and you go, 'Really? You liked that piece of s--t?' That's the sort of thing Sean Penn would say. So I now tell people, 'Thank you, that's great,' and move on. But you know, I remember John Lennon saying that if he could, he'd go back and burn most of the work the Beatles did. He said he'd rerecord all the f--king songs, and I get that," he says. "Most of my work I would just stomp into the ground and start over again." Oldman isn't fond of his performances in the Dark Knight trilogy and the Harry Potter franchise.

What about Sid & Nancy, which gave Oldman his first big break in 1986?

"I don't like myself in the movie, no. Frankly, I didn't want to make it in the first place. I was talked into it at the time," the actor recalls. "And now, if I flip through the channels and come upon it, it's 'F--k! Sid & Nancy,' and off it goes." He adds, "I don't think I played Sid Vicious very well. I don't like the way I look in Prick Up Your Ears. I wasn't the right person to play Beethoven and turned it down half a dozen times."

Still, Oldman acknowledges that there's "been some really good work along the way." For example, he's particularly proud of his work in 1991's JFK and 2011's Tinker Tailor Soldier Spy. "I can look at certain movies and think, 'That scene was good,' or, 'There's something I was trying to get at," the actor admits.

"I'm 56 now, and if you've managed to work as long as I have, you understand that these roles everyone fusses over are your career; they're not your life. It's just a job, really. You have financial responsibilities, you have children, you have all those things all the regular people have," says the actor-director-pianist, who's been married four times and has three sons. "Honestly, I forget I'm an actor until I'm reminded."

Aside from the big paycheck, why did Oldman agree to star in Dawn of the Planet of the Apes? "I love the franchise," he says. "I was a fan, as we all were, of the original films. I thought the script was very good." Unlike other movies that tempt him with a hefty salary, he explains, "This one had a pedigree."

Oldman, who believes that "our world has gone to hell," also calls reality TV "the museum of social decay."

As one might imagine, Oldman's outspoke demeanor gets him into trouble. "I just think political correctness is crap. That's what I think about it," he says. "I think it's like, take a f--king joke. Get over it."

Asked about Mel Gibson, whose career has yet to recover after his DUI arrest, Oldman sighs. "He got drunk and said a few things, but we've all said those things. We're all f--king hypocrites. That's what I think about it," the British actor says. "The policeman who arrested him has never used the word 'n----r' or 'that f--king Jew?' I'm being brutally honest here. It's the hypocrisy of it that drives me crazy. Or maybe I should strike that and say 'the N word' and 'the F word,' though there are two F words now."

To clarify, he means the three-letter F word.

"[Alec Baldwin] calling someone a f-g in the street while he's pissed off coming out of his building because they won't leave him alone. I don't blame him," he says. "So they persecute." (Baldwin denied calling a paparazzo a "c--ksucking f-ag" in 2013. "Acoustic analysis proves the word is fathead," he said.)

PHOTOS: TV stars vs. their shows

"Mel Gibson is in a town that's run by Jews and he said the wrong thing because he's actually bitten the hand that I guess has fed him—and doesn't need to feed him anymore because he's got enough dough. He's like an outcast, a leper, you know? But some Jewish guy in his office somewhere hasn't turned and said, 'That f--king k---t' or 'F--k those Germans,' whatever it is? We all hide and try to be so politically correct. That's what gets me. It's just the sheer hypocrisy of everyone, that we all stand on this thing going, 'Isn't that shocking?'" Oldman says. "All right. Shall I stop talking now? What else can we discuss?"

Asked what he thinks of the pope, Oldman jokingly replies, "Oh, f--k the pope!"

"This interview has gone very badly," Oldman says after laughing and burying his head in his hands. "You have to edit and cut half of what I've said, because it's going to make me sound like a bigot...I'm defending all the wrong people. I'm saying Mel's all right, Alec's a good guy. So how do I come across? Angry?" The actor continues, "It's dishonesty that frustrates me most. I can't bear double standards."

VIDEO: Gary Oldman laughs about his chances of winning an Oscar

As such, Oldman takes issue with the Academy of Motion Picture Arts and Sciences. "At the Oscars, if you didn't vote for 12 Years a Slave, you were a racist. You have to be very careful about what you say," the actor says. He clarifies his position, explaining, "I do have particular views and opinions that most of this town doesn't share, but it's not like I'm a fascist or a racist. There's nothing like that in my history."

Oldman supposes it would mean something to win an Oscar, "but who knows?"

"Does it mean anything to win a Laurence Olivier Award or a Tony? I guess it's peers or people acknowledging you in some way. I know it certainly doesn't mean anything to win a Golden Globe, that's for sure," he says. "It's a meaningless event. The Hollywood Foreign Press Association is kidding you that something's happening. They're f--king ridiculous. There's nothing going on at all. It's 90 nobodies having a wank. Everybody's getting drunk, and everybody's sucking up to everybody. Boycott the f--king thing. Just say we're not going to play this silly game with you anymore. The Oscars are different. But it's showbiz. It's all showbiz. That makes me sound like I've got sour grapes or something, doesn't it?"

According to the Air Force One star, "It's sort of like a club. I'm respected, but it's still a little bit like something's happening over the garden wall. Do you know what I mean? It's like being invited through the curtain into first class. Occasionally I can see what they eat up there, but then it's back to my seat."

"What people don't realize is that you need to work at being a celebrity," he says of playing the fame game. "I'm not talking about movies. I mean the other side of it. You have to campaign. It's a whole other part of your career, and I wish I could have navigated it a bit better. I may have an Oscar now, had I."

PHOTOS: Stars who have never won an Oscar