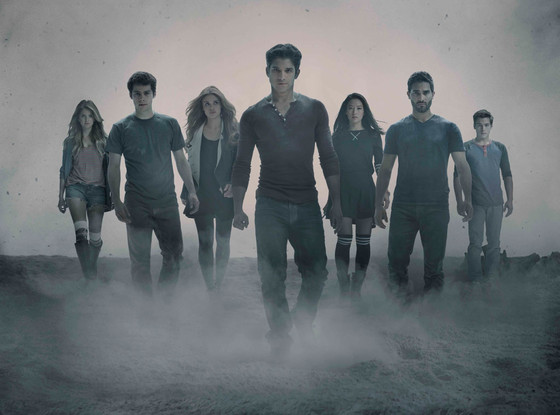 Teen Wolf (also known as the love of our lives) is back, and everything is a little bit weird. Ok, a lot weird. Beacon Hills was nowhere to be found as the gang went to some ridiculous measures to search for Derek somewhere in Mexico. In true Teen Wolf fashion, there was even a fight-laden rave involved.

Stiles and Lydia did their best to negotiate for Derek's release from a mafia-esque Mexican mansion run by a family of hunters based in Mexico, named the Calaveras. Meanwhile, Kira and Malia (who is our new fave character, by the way) used the classic disguise tactic of young ladies dancing together at the downstairs dance party (which is not actually innuendo) before breaking out their supernatural ass-kicking skills and nun-chucking/punching their way to victory over attacking Calaveras minions.  Scott helped too, of course, but Kira and Malia owned that fight.

They soon learned that the Calaveras did not have Derek, but now they had Lydia instead, and wanted her for her banshee powers. Scott and Kira also got kidnapped, and Kira was forced to electrocute Scott, which prompted him to have an Alpha-vision of the very-much-alive Kate Argent. (Plus: Stiles and Malia smooching! Such cuties.)

We saw then that Derek was buried deep in some cobwebs somewhere under Kate's watchful eye. The Calaveras let Scott and company go so that they might be able to find Derek, despite the fact that none of their men have come back from that same mission. A guide was provided, however, and the guide turned out to be the mysterious Braeden, the mercenary who rescued Isaac back in the beginning of season 3.

Apparently, the Calaveras had rescued Kate from her coffin after they heard she had been "killed" by an alpha's claws, and tried to force her to kill herself, as hunters are supposed to do if they get werewolf'd. Kate managed to escape, however, and is now back to resume her havoc-wreaking.

On the way to wherever they were going, Stiles' jeep breaks down, so Scott and Braeden ride ahead on Braeden's motorcycle while Kira, Lydia, Stiles, and Malia stay back to fix the jeep. They quickly realized, however, that there was something super creepy lurking nearby.

Scott and Braeden arrived at some ruins, where Kate had supposedly taken up camp, and they too encountered creepy lurkings. As they searched through creepy abandoned buildings filled with scorpions (anyone else getting sort of an Indiana Jones vibe?), Braeden berated Scott for not having kissed Kira when he left her behind, because this is definitely the time for that discussion.

NEWS: Find out which judges are returning to American Idol

Back at the jeep, Malia and Kira took stock of their surroundings while Stiles "fixed" his jeep by seemingly digging into the engine randomly with a screwdriver, but we're not going to judge. It did eventually work, after all. Malia, Kira, and Kira's sword went adventuring, before running scared back to the jeep by something that smelled "like death."

Scott and Braeden, meanwhile, found a giant monster, but Scott scared it away by werewolf-yelling at it, which also helped reveal the seal of some sort of jaquar god which was guarding Derek's cobwebby tomb. As they broke through the seal, a hand reached out…

The jeep pulled up to the ruins, and Scott and Braeden emerged with Derek in tow. It was not, however, the Derek we know and love. It was little Derek!

First of all, what? Second of all, huh? What has Kate been doing? Has she found the fountain of youth, only to unnecessarily give it to Derek?  Has Derek been time traveling? Was Kate that giant monster? We have so many questions. So. Many. Questions.

We cannot say we're not entertained, however. This show continues to shock us, and to make us smile, and to wrestle with our tear ducts whenever we remember that a member of the group is missing.

All in all, while tonight's premiere was a tad unusual, we're so very, very happy to have our favorite supernatural teens back in our lives.

So what did you think of the premiere? Good? Bad? Awesome? Weird? Is Malia definitely your new favorite character? Sound off in the comments!

TAGS/ Teen Wolf , TV , Watch With Kristin , Top Stories , Recaps
GET POP CULTURED!
*Email entered incorrectly. Please try again.
By subscribing to our newsletter you agree to the Privacy Policy and Terms of Use
Daily
Weekly