A Reporter Investigated a Town Mystery, and It Led Her Directly to Her Own Marriage Proposal 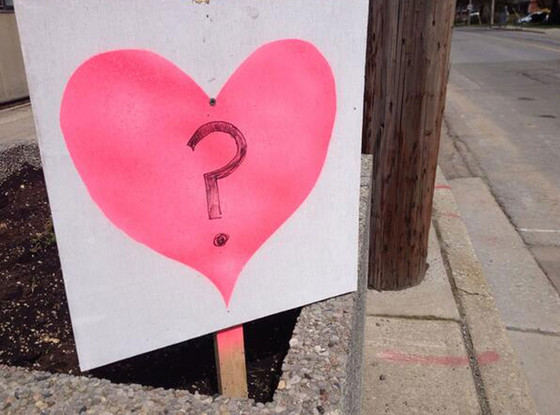 Next time you go to solve a mystery, you might be on your way to getting engaged! Unless you're in the Scooby-Doo gang, in which case you are almost definitely on your way to an abandoned amusement park that's being haunted by Mr. Jenkins, the ol' Tilt-a-Whirl operator in disguise.

For Welland Tribune reporter Maryanne Firth, her investigative skills not only helped her solve a mystery in her town of Welland, Ontario, but it led her to one of the biggest surprises of her life. And it all started with pink hearts.

The 29-year-old started seeing simple paper signs with pink hearts popping up all over town.

WATCH: This guy filmed himself lip-syncing in 26 countries over 4 years just to propose to his girlfriend

#WellandHearts are everywhere, even the middle of the roundabout! pic.twitter.com/YTM0MDR73n

"They were bright. They contained no message. They were everywhere. My curiosity was piqued," she wrote in her Welland Tribune story about the mystery.

She was so intrigued by the sudden appearance of the signs that she asked the public to help her find out who and what was behind the hearts.

Have you spotted the heart signs posted all over Welland? Join our conversation and post photos using #WellandHearts http://t.co/JhPNqux3ka

On a weekend that she had to work, Maryanne spotted a pink heart next to her office that included an address and a time. Hoping to get the ending to her story, she arrived at Chippawa Park at 3 p.m., just like the sign said, thinking she would find a gathering of strangers promoting random acts of kindness.

What she found was one man handing out flowers while wearing a box with a pink heart painted on it over his head. And when she approached the man who was seemingly behind all of it, she got the answer to her puzzle…and then some. 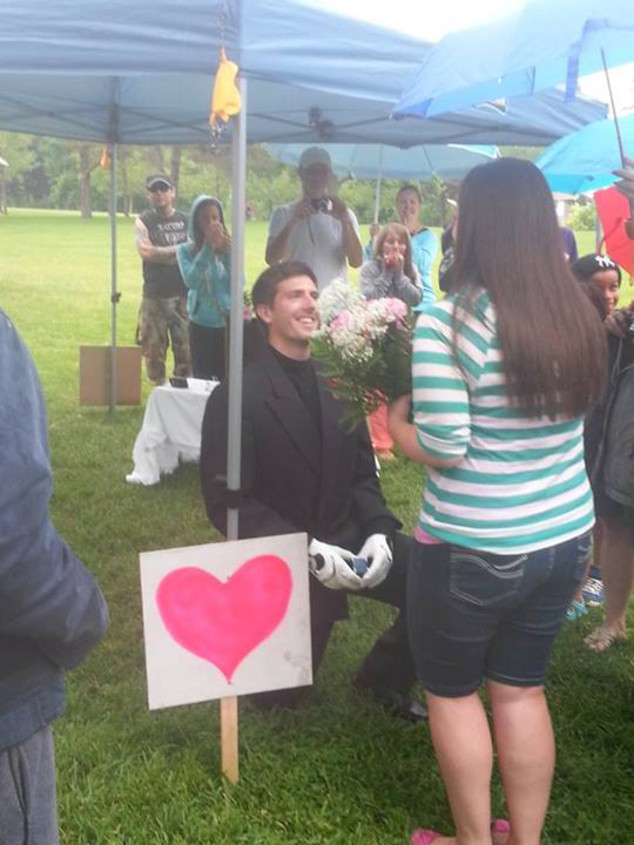 "He was handing out flowers to onlookers with what I can only imagine was a smile behind his cardboard disguise.He handed one to me—a sweet, but familiar gesture—and then continued passing them out to others. Then he gathered up the remaining flowers into a bouquet and turned to me. He removed the disguise.

"This was the man who I've loved for the past eight years. Who I've built a life with. This was all for me. Ryan got down on one knee and as I tried unsuccessfully to hold back tears, he asked me to spend the rest of my life with him.

RELATED: Our favorite TV proposals of all time 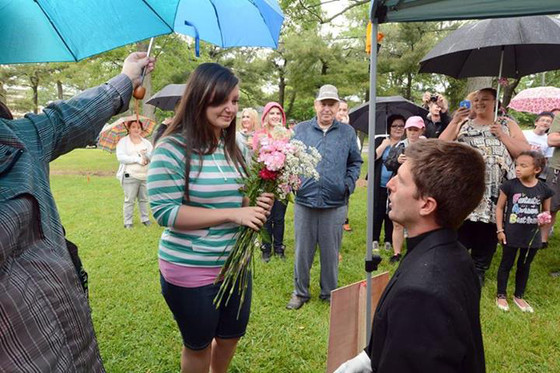 Maryanne's boyfriend Ryan St. Denis had planted over 50 signs all over town as part of his plan to propose to his girlfriend of eight years. He knew that she would see the signs and immediately set out to get the story behind them.

"It all boils down to the fact that Ryan St. Denis knows me better than I know myself. He knew I'd see the signs. He knew I'd be curious. And he knew my nose for news would drive me to unearth the secret.

"How he kept it from me all this time, I'll never know.

"What I do know is that I am one lucky girl and I owe a heartfelt thank you to everyone, especially the man in the box, who made this the most memorable day of my life."

Isn't that the cutest proposal you've ever seen in your entire life? Who doesn't love scavenger hunts?! Memo to people planning to propose in the near future: adorable scavenger hunts, yes. Pretending your plane is crashing and then proposing? Nope.

TAGS/ Engagements , E! Loves , Top Stories
GET POP CULTURED!
*Email entered incorrectly. Please try again.
By subscribing to our newsletter you agree to the Privacy Policy and Terms of Use
Daily
Weekly