Remember When... Tom Cruise Jumped on Oprah's Couch Because He Was in Love With Katie Holmes? 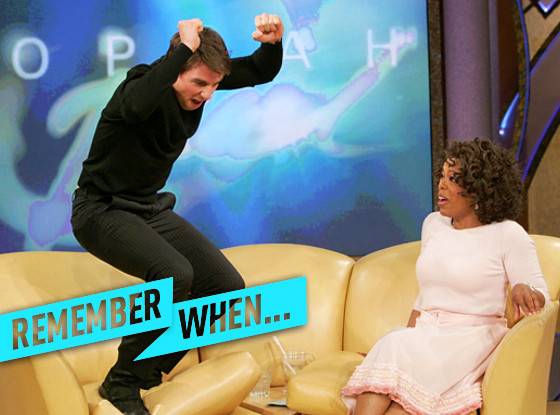 Remember When... is a weekly feature every (#Throwback)Thursday where we look back on a moment that changed the world of pop culture forever. Come for the nostalgia, stay for the reminder that you are getting SO OLD.

What Happened: The date was May 23, 2005 (it's worth mentioning, tomorrow is the nine-year anniversary). It was a month after Tom Cruise and Katie Holmes confirmed they were dating, about a year and a half before they'd get married, and seven years before they'd get divorced.

Tom appeared on The Oprah Winfrey Show presumably to promote a movie, but mostly to tell the world he was in love with Katie, which involved a lot of bowing on one knee (five times), grabbing Oprah's hands and shaking her (three times), and—after Oprah pointed out, "We've never seen you behave this way before!"—jumping. He didn't jump on the couch. He jumped onto the couch, then just kind of stood there. A minor correction to the collective memory. The audience LOST THEIR MINDS.

REMEMBER WHEN... Lauren Conrad chose love over Paris on The Hills?

What Else Was Happening: The movie Tom should have been plugging was Spielberg's War of the Worlds, while Katie Holmes transitioned from Dawson's Creek to the big screen in Batman Begins. Both were among the 10 highest earning films of the year. Only one got a sequel. Katie would be recast with Maggie Gyllenhaal. 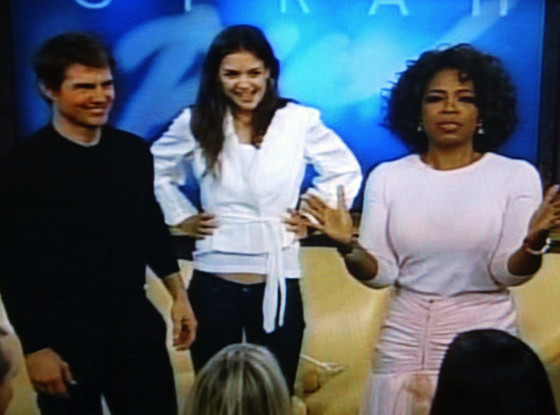 REMEMBER WHEN... Everyone thought the world would end with Y2K?

How We Remember It

Julia Hays, Audience Development Associate: "A day that will be remembered as one of the most notable couch moments in television history. TV is known for its iconic furniture. Al Bundy's '70s-style seating, the Huxtables' sophisticated sofa, Dick Van Dyke's  sentient ottoman. As a furniture aficionado, I knew that Tom Cruise's abuse and blatant disrespect of Oprah's seating arrangement would be a divisive issue in the media. Naturally, one would like to root for an impassioned display of true love, however, the etiquette regarding shoes on upholstery is just, like, Manners 101. It appears that I was not alone, because soon after his infamous talk show appearance the public image of Tom Cruise shifted. Granted, he is still a Hollywood superstar, but we've never really looked at him the same way, have we? And we all know why—Tom Cruise is disrespectful toward other people's furniture, and America has rightly and fairly judged him for that. I might still see Edge of Tomorrow, though. That looks fun."

Jenna Loomer, Senior Interactive Producer: "I will forever remember Oprah's face of pure horror the second Tom got that crazy look in his eye. Sure, she acted like she was thrilled for him, but you can tell underneath that big hair she was thinking what we were all thinking, which was get this guy a net already. To this day I wish I could have been a fly on the wall to when he and Katie watched that interview together, because no woman wants to be dating the guy who made a scene on Oprah..."

Oprah Winfrey, Television Personality: (to Good Morning America in 2005) "It was wilder than it was appearing to me. I was just trying to maintain the truth for myself because I couldn't figure out what was going on. And what I was prepared for was the dance that happens when you're doing celebrities—when you know they're not going to tell you, but you're going to ask anyway, and then you try asking another way...I was not buying."

How do you remember Tom and Katie's romance? Regale us in the comments!