Agents of S.H.I.E.L.D. Finale: Find Out Which Marvel Legend Showed Up to Save the Day! 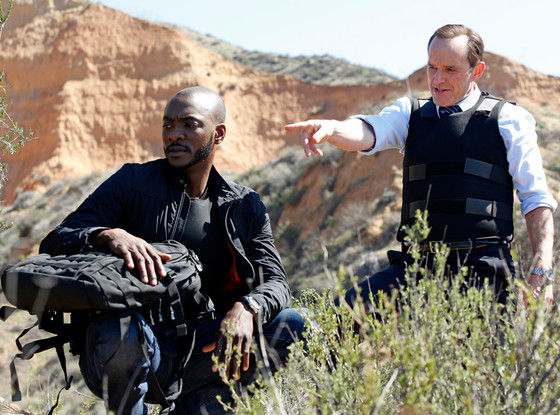 WARNING: We're about to discuss spoilers from Tuesday night's finale of Marvel's Agents of S.H.I.E.L.D. If you do not wish to know what happened, turn away now.

Wondering if TV's most cumbersome headline would have to change, due to the fact that S.H.I.E.L.D. no longer exists? Wonder no more! Thanks to tonight's season finale, the classic Marvel organization is coming back with a new director you already know and love. (Spoiler: It's Agent Coulson, but we'll get to that later.)

Tonight was all about taking down Garrett and his Hydra-y super soldiers. While we were rarely worried about Coulson's infinitely badass team as they worked to take down Garrett and his super soldiers, we were definitely worried about Fitz and Simmons. The smarty-pants duo was trapped in a pod deep in the ocean thanks to Ward's struggle with whether or not to kill them. It seemed that there was no way out, until the two geniuses discovered that they could explode the window out of the pod and swim to the surface.

Fitz made Simmons take the only air supply, so he was not in good shape as she made it to the top. Luckily, they swam right to the waiting arms of none other thanSamuel L. Jackson's Director Fury (in a helicopter, not just chilling on the surface of the ocean).

That's right! Director Fury came out of hiding to save the day, appearing just in time to hand Coulson his giant gun from The Avengers, with which he used to easily blow everyone away. Skye managed to find Deathlok's son, and used him to send his dad a message, which then made him turn his weapons on Garrett. Garrett tried to do the whole I'm-secretly-not-dead-and-now-I'm-a-super-villain thing that superhero movies love to exploit, but Coulson quickly exploded him into a nice mist of Garrett-confetti.

Then, Fury gave Coulson a small cube that apparently was the toolbox to restarting S.H.I.E.L.D., and sent him and his team off to an underground base run by a new non-Eric character played by Patton Oswalt (Life Model Decoy maybe? We shall see....)

Two short and mysterious scenes closed out the season: In some prison-type place, Raina visited an unseen person, and handed him a picture of Skye, saying that she had found his daughter. (Whaaaaat?) Then, Coulson seemed to be sleepwalking as he picked up a mysterious knife-looking thing and began scratching Garrett's mysterious symbols onto a wall.

Other Fantastic Things: When May fought with Ward, and ended up shooting a nail gun through his foot to the floor, we pretty much overdosed from too much awesome. We also got all kinds of happy tingles when Nick Fury officially called Coulson an Avenger. Congrats, Coulson!

Potentially Sad Things: Fitz is "alive," as Simmons sadly revealed, but we didn't get a glimpse of him after Simmons and Fury pulled him out of the water. So, as of now, who knows what that actually means for him in season two.

What did you all think of Agents of S.H.I.E.L.D.'s first finale? Will you be tuning in next year? Sound off in the comments below!

PHOTOS: Renewed or canceled? Find out where your favorite shows stand