It's gonna be ladies' night each and every night on NBC!

Debra Messing, Katherine Heigl, Kate Walsh and Krysten Ritter are just a few of the lovely ladies who will soon grace our screens in the upcoming TV season on NBC. Over the past three days, the Peacock network has slowly been introducing their new female-driven series to the world, and we've created a handy-dandy cheat sheet to meet all your TV-loving needs.

Read on to discover what the hilarious Happy Endings gals are up to, which How I Met Your Mother star is moving on to a new romantic comedy, and find out which new series have Will Ferrell and Ellen DeGeneres as their executive producers.

RELATED: Katherine Heigl is coming back to TV—get the scoop!

Mysteries of Laura: Welcome back to NBC, Debra Messing! After starring in the Emmy award-winning series Will and Grace and singing her heart out on the show everyone loved to hate Smash, the actress is once again returning to the network. NBC announced Thursday that they've picked up Messing's newest dama, Mysteries of Laura, from executive producers Aaron Kaplan and Greg Berlanti. Based on a Spanish format, this procedural drama with a sharp sense of humor follows a quirky female homicide detective (Messing) who juggles high-stakes crime as well as her ex-husband and a devilish set of twin boys.

State of Affiars: Described as Scandal meets The West Wing, the upcoming drama revolves around a CIA officer (Katherine Heigl), who becomes the president's daily briefer. Heigl's character (whose name is TBA) will assume responsibility for targeting America's most critical threats while navigating the unique lifestyle that comes with such a high-powered job. Damn, looks like Izzie Stevens has really stepped up her responsibilities in life!

MORE: Check out all of CBS' new shows!

Constantine: NBC is ready to bring one of DC Comic's most popular characters to life in their buzzed-about new drama. Starring Criminal Mind's Matt Ryan as John Constantine, a man who's soul is already damned to hell, the series centers on the anti-hero's battle to find the demons that threaten our world and send them back where they belong. Dexter's Daniel Cerone will serve as executive producer along with Man of Steel and The Dark Knight Rises' David S. Goyer. The cast also includes Harold Perrineau, Charles Halford and Lucy Griffiths.

Allegiance: Starring Gavin Stenhouse as an idealistic CIA analyst who discovers that his parents (played by Scott Cohen and Hope Davis) are deactivated Soviet spies. The parents are reactivated with one last mission: Turn the son into a Russian asset. (Does this sound like FX's The Americans to anyone else?)

Odyssey: An international thriller about the unexpected collision between a female soldier (Anna Friel), a corporate attorney (Peter Facinelli) and a political activist (Jake Robinson) in the aftermath of the murder of a key al-Qaida operative in an operation in Northern Africa. 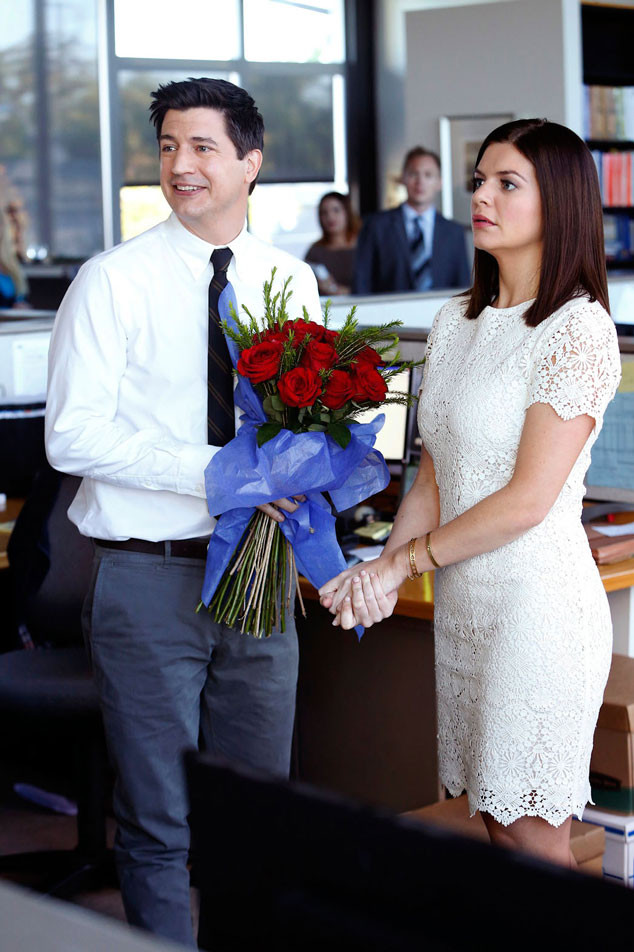 Marry Me: Also jumping back on the TV bandwagon are Happy Endings' creator David Caspe and star Casey Wilson. NBC officially ordered Marry Me, a single-camera comedy starring Wilson and Ken Marino as a newly engaged couple who realize that tying the knot is much harder than it looks. (Doesn't that sound a-mah-zing?!) For all you Happy Endings fans out there, think of this promising comedy as The Year of Penny: Part 2! Oh and fun fact: Marry Me's creator and executive producer Caspe is actually engaged to leading lady Wilson in real life. Swoon!

A to Z: How I Met Your Mother's leading lady Cristin Milioti will also be joining the NBC family. The endearing actress will star in A to Z, the network's newest comedy pickup of the year. Described as a whimsical romantic comedy set in the world of an online dating company, A to Z details a relationship from meeting to breakup.The ensemble cast including, Milioti, Henry Zebrowski, Lenora Crichlow and Ben Feldman, will navigate the complicated world of modern dating and ponder the question: Is there such a thing as destiny?

MORE: Check out all of ABC's news shows!

Bad Judge: Kate Walsh is back! The Private Practice leading lady will star in Bad Judge as the titular character, Rebecca Wright, a wild child who knows how to have a good time, but by day she's one of the most respected criminal judges in Los Angeles. She's got a rep for being unorthodox in the courtroom and for saying what's on her mind. Rebecca's not ready to settle down just yet, until an 8-year-old boy, whose parents she sent away, needs her help. Bad Judge hails from Gary Sanchez Productions (aka Will Ferrell is behind this!) and also stars Mather Zickel, John Ducey, Tone Bell and Theodore Barnes.

Mission Control: The B is back! Krysten Ritter will star as Dr. Mary Kendricks, a tough but brilliant aerospace engineer, leading a team of NASA scientists on the cutting edge of space exploration. Sounds great, right? Here's the twist: The comedy takes place in the 1960s and because Mary is (Gasp!) a woman, she must navigate the ridiculous boys' club of astronauts and engineering nerds is no easy task. Will Ferrell will serve as executive producer along with Adam McKay and Owen Burke.

MORE: Check out all of The CW's new shows!

One Big Happy: This comedy is slated to appear on NBC midseason, but honestly we want it now! Happy Ending's Elisha Cuthbert and 2 Broke Girl's Nick Zano star as Lizzy and Luke, two best friends who have stuck together and been there for each other ever since they were kids. They eventually decide to have a baby together (in a totally platonic, friends way) but just as Lizzy discovers that she's preggers, Luke reveals that he fell in love with Prudence (Kelly Brook) and got married. Ellen DeGeneres will serve as executive producer of this awkwardly hilarious comedy.

TAGS/ Debra Messing , How I Met Your Mother , NBC , 2014 Upfronts , TV , Top Stories , Watch With Kristin
GET POP CULTURED!
*Email entered incorrectly. Please try again.
By subscribing to our newsletter you agree to the Privacy Policy and Terms of Use
Daily
Weekly