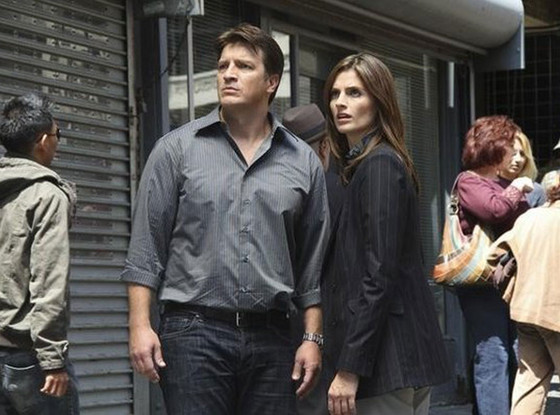 Monday Monday Monday Mondaaaaaay. Sing that to the tune of Louie's weirdly catchy theme song, because the FX comedy is back after the longest hiatus ever, unless you count 24's nearly four year break as a "hiatus." Plus, Beckett found herself accused of murder on Castle, Bates Motel got even more Psycho, and The Blacklist set the stage for an explosive finale. There was also a lot of singing on The Voice, and Dancing with the Stars was also on. Basically Monday was like, "You want some TV? Oh I'll give you some TV!" and then it proceeded to throw all the shows at us at once in a manner we're mostly used to getting from Sunday. It was a pretty crazy night, but you don't have to sweat it because we're here to break 'em all down for you, the same way we do it every night. So we did have to sweat it, but it's ok. You can't smell us through your computer screens, hopefully.

Castle: It's been six long seasons, but Kate finally got the justice she's been searching for. Senator Bracken is behind bars after an episode chock full of Beckett badassery. After the guy she'd been surveilling wound up dead, and then Vulcan also ended up dead due to a bullet from her own back-up gun, Beckett was deemed a fugitive. She was drugged, she was nearly shot in the head, she was arrested, and it looked like there wasn't much of a way out until she realized that a note in her mother's journal indicated that Captain Montgomery's (RIP) evidence tape was hidden in the family of elephants she conveniently keeps on her desk. The tape proved once and for all that Bracken was basically an evil little scoundrel, and Beckett arrested him at his own press conference. It was awesome, and a long time coming. In Beckett's own words: "It's over." Now let's just hope it stays that way. 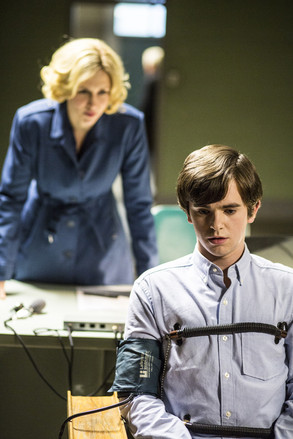 Bates Motel: Oh Norman, you creepy little murderer. Our feelings about you are so conflicted, but our feelings are nothing like your poor mother's feelings. What do you do when you think your son might be a psychopath? Apparently, you definitely don't allow him to confess to the murder he now remembers he committed, and then you end up having to stop his suicide attempt later on. Possibly the most frightening moment of the episode was the fact that Norman was able to pass his polygraph test, due to the fact that it was really the murderous version of his mother that lives in his mind who killed Miss Watson, and not Norman himself. This show is heading into true Psycho territory, and we couldn't be more excited.

Louie: He's back, and better/darker than ever. It's been 19 long months since we last had new Louie, and we've basically been in a pit of despair this entire time.Tonight we got not just one, but two new episodes, and we've climbed out of our pit of despair and into more of a shallow pool of slightly depressed confusion. Of course, we're happy about that shallow pool. It's the best shallow pool we've ever been in, and we'd never like to leave it, OK,  Louie? Don't ever go away again.

Anyway, we're not sure what we were expecting to happen when, after bombing at a gala headlined by Jerry Seinfeld, he went home with a model and astronaut's daughter played by Yvonne Strahovski, but it sure wasn't what did end up happening. When she tried to tickle him, he got so violently upset that he punched her in the face, knocking her out and prompting her super rich family to demand he pay them $10 million, or $5 million if Louie's lawyer (played by Victor Garber) has anything to say about it. Of course, this show is about as serialized as a carton of milk (or another thing that is not at all serialized), so it probably will never come up again, but still. Way to throw us for a loop once more.

Extra thoughts: Yvonne Strahovski is everywhere lately (and by everywhere we mean 24 and also Louie) and we're very, very ok with it. Also, how freaking funny and also frighteningly true to life was that garbage man scene at the beginning of "Back?" Brilliant.

READ: Find out who went home on Dancing with the Stars! 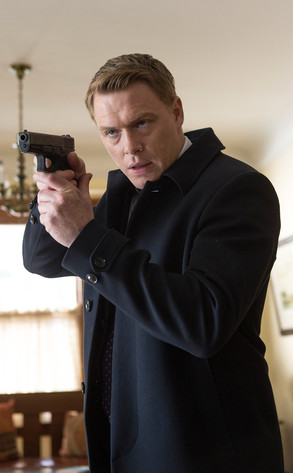 The Blacklist: Lizzie is mad as hell and she's not going to take it anymore! Just kidding, she is, but she's still not happy with Red after learning that he killed Sam, her father, in the hospital all those episodes ago. Alas, there are more important things to worry about, like Berlin's impending arrival.

Yes, we learned Berlin is a person, not a place, and they have a serious score to settle with Red. In tonight's appetizer of an episode, which set the stage for the finale, Liz finally realized all of the targets on Red's blacklist have been connected as he's really been using the FBI to survive, to protect himself from an enemy he doesn't even know: Berlin. Too bad the FBI decided to stop playing nice, taking Red's immunity off the table. Ugh, is it next Monday yet?!

The Tomorrow People: That was quite a (potential series?) finale! While Stephen managed to save the world from being frozen in time by The Machine, John was given back his powers and a new life as Jedikiah's very first super soldier. He was supposed to recruit Cara, but he seemed to have no memory of who she was! Season two, please!

The Voice: We just don't even know what to do with Adam Levine's hair. It nearly completely distracted us from the performances of the top 8. Performance of the night kind of goes to the opener, Sisaundra Lewis with "River Deep, Mountain High," but really that award goes to Adam's hair. Adam's hair also gets the award for worst performance of the night. We're confused and we don't know how to feel.

So what did you guys watch tonight? What did you not watch? What should we be watching? What have you been thinking of watching but haven't gotten around to it yet? How completely crazy were some of those Met Gala looks, huh? Hit up the comments and let us know!

PHOTOS: TV events not to miss

TAGS/ CASTLE , The Voice , The Blacklist , Watch With Kristin , Top Stories , TV , Recaps
GET POP CULTURED!
*Email entered incorrectly. Please try again.
By subscribing to our newsletter you agree to the Privacy Policy and Terms of Use
Daily
Weekly