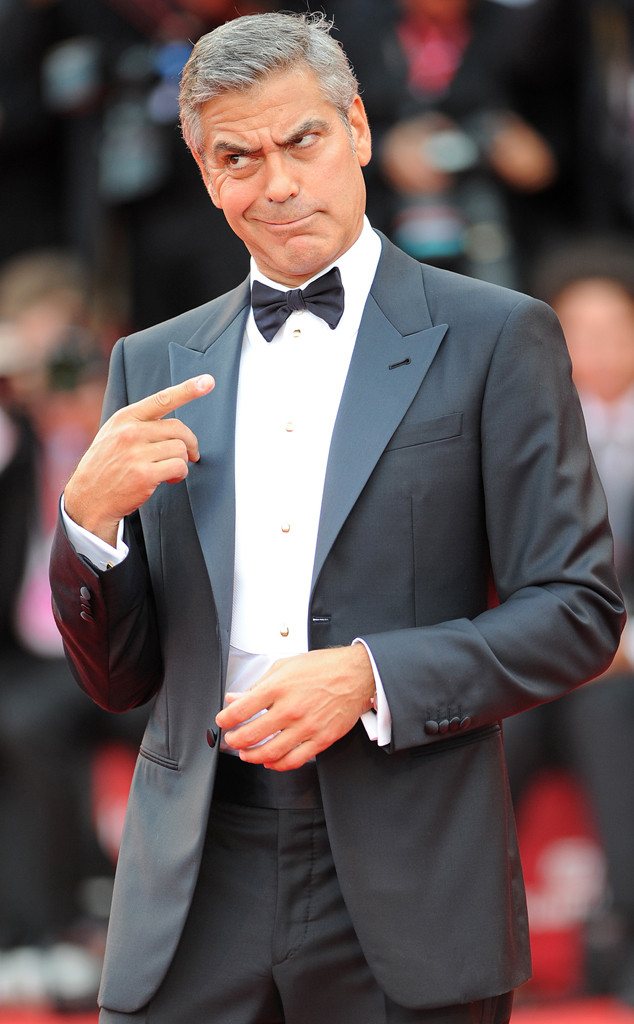 George Clooney put a ring on it.

E! News has confirmed that the famous bachelor is engaged to human rights lawyer Amal Alamuddin. Prior to popping the question, the Gravity star famously romanced a number of women, including Stacy Keibler, Elisabetta Canalis, Sarah Larson, Krista Allen, Maria Bertrand, Lisa Snowdon, Celine Balitran, Karen "Duff" Duffy and Kelly Preston. He was married to Talia Balsam from 1989 to 1993.

In the past 19 years, Clooney's views on love, marriage and children have changed. Here's how:

"I won't get married again because I wasn't very good at it," he said during a Barbara Walters Interview in November 1995.

In a December 1996 Vanity Fair cover story, Clooney opened up about the demise of his marriage. "I probably—definitely—wasn't someone who should have been married at that point. I just don't feel like I gave Talia a fair shot. I was responsible for the failure of that marriage." Once lawyers got involved, the split worsened. "I would say to Talia, 'You tell me how much—what you think is fair. I'll write the check. I won't negotiate.' Instead, I paid $80,000 in lawyers' fees. And that makes me crazy."

A decade later, the Monuments Men star was named People's Sexiest Man Alive. Asked if he'd ever consider marriage again, he demurred. "Marriage? Who knows? I've been married. It's not something I'm looking out for," the movie star said. "Things could always change, but it's not a consideration right now. The truth is I'm really happy. The things that are a drag in my life are so outweighed by the things that are great. I have families that I spend my days with, and friends I spend my days with, and people I care very much about. I get to do what almost no one gets to do. My life's really good."

Speaking to the Sunday People in July 2008, Clooney predicted he'd be a lifelong bachelor. "I don't expect to ever get married again or have children. I am never at home and every woman gets sick of it...If I was them, I would never put up with me for long—and they don't." Still, he showed signs of change. "I do begin to wonder, 'Am I going to be relegated to these three-year relationships for the rest of my life?' My trouble is that I keep on taking jobs, and jobs take me further away from home," he said. "What I really have is work. I like being on a film set, freezing my ass off, or whatever."

During a January 2011 appearance on CNN's Piers Morgan Tonight, Clooney interrupted his dad, who hoped to see his son settle down again. "I hate to blow your whole news story, but I was married, so I gave it a shot" the actor said. Clooney said that "shot" ought to have "proven how good I was at it."

The Descendants star was asked about his anti-marriage interviews with Walters and Vanity Fair when he covered Rolling Stone in November 2011. Had anything changed? "I answered that question in 1997, having recently been divorced, and I really haven't addressed it since. It's one of those things, like many things in my life, that get picked up and repeated and are made to seem like new news."

In December 2011's Esquire, Clooney wrote an essay about the life lessons he'd learned over the years. "People forget that I was married. I love that, 'Will he get married?' I don't talk about it because I don't think about it. I don't ever question other peoples' versions of how they live their lives or what they do," he wrote. "I understand that it's a subject of interest for people. But sometimes it exists only because it came up years ago. It becomes this conversation piece that constantly resurfaces."

Covering The Hollywood Reporter in February 2012, Clooney was asked if marriage was ever on his mind. "I don't even think about it, really," the Men Who Stare at Goats star insisted.

Clooney joked about his bachelor status while speaking to The Express in January 2014. "This fascination with my love life is really something," the two-time Academy Award winner marveled. "I keep saying I'll never get married again or have children but people just don't want to believe me."

He never even considered it? "I haven't had aspirations in that way, ever. I was married in 1989. I wasn't very good at it," Clooney told Esquire UK that same month. "I was quoted as saying I'll never get married again pretty much right after I got divorced and then I've never talked about it since."

Whatever Alamuddin did to change his mind is unclear—but congratulations are certainly in order!

TAGS/ George Clooney , Love And Sex , , Celebrities , Top Stories
GET POP CULTURED!
*Email entered incorrectly. Please try again.
By subscribing to our newsletter you agree to the Privacy Policy and Terms of Use
Daily
Weekly