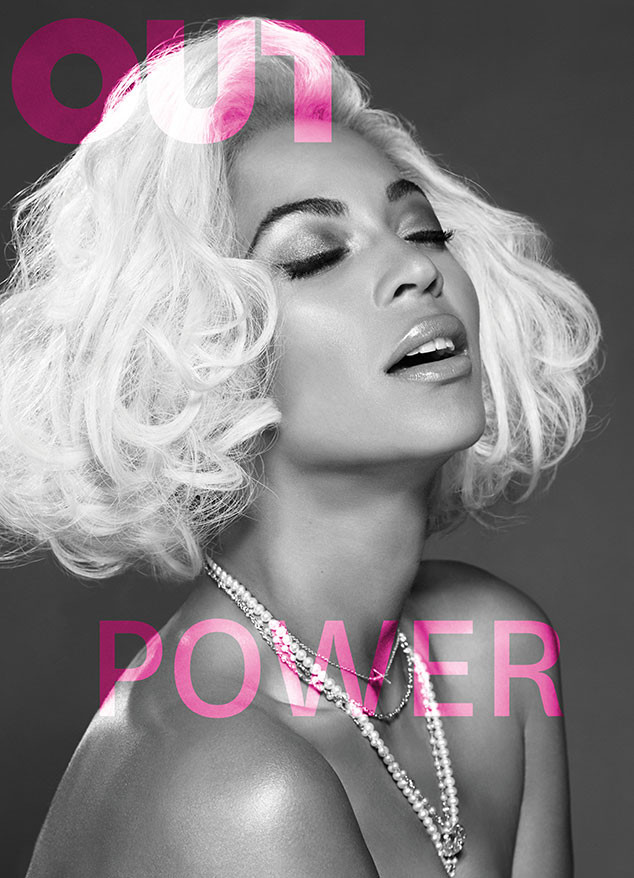 Beyoncé is a bombshell—but you already knew that, didn't you?

The 32-year-old entertainer graces the cover of Out's Power Issue, wearing a blond wig reminiscent of Marilyn Monroe in the 1953 classic Gentlemen Prefer Blondes. Posing topless and cupping her breasts in the racy photo shoot, the R&B diva opens up about her self-titled visual album, sexuality and more.

The "Drunk in Love" singer has been hailed as a feminist hero in recent years. Beyoncé hopes to inspire other women to behave similarly. "There is unbelievable power in ownership, and women should own their sexuality," she explains. "There is a double standard when it comes to sexuality that still persists. Men are free and women are not. That is crazy. The old lessons of submissiveness and fragility made us victims. Women are so much more than that. You can be a businesswoman, a mother, an artist, and a feminist—whatever you want to be—and still be a sexual being. It's not mutually exclusive."

Her most recent album, released in late 2013, appeals to a wide range of audiences—not just women. According to Beyoncé, her intention was to reach listeners on a human (and perhaps spiritual) level.

"While I am definitely conscious of all the different types of people who listen to my music, I really set out to make the most personal, honest, and best album I could make," she says via e-mail, as she was in the midst of her Mrs. Carter World Tour at the time of the interview. "I needed to free myself from the pressures and expectations of what I thought I should say or be, and just speak from the heart."

"Being that I am a woman in a male-dominated society, the feminist mentality rang true to me and became a way to personalize that struggle...But what I'm really referring to, and hoping for, is human rights and equality, not just that between a woman and a man," Beyoncé tells the LGBTQ publication. "So I'm very happy if my words can ever inspire or empower someone who considers themselves an oppressed minority...We are all the same and we all want the same things: the right to be happy, to be just who we want to be and to love who we want to love."

In regard to her music, Beyoncé admits it was her most ambitious endeavor to date. "I was recording, shooting videos, and performing on the tour every night, all at the same time. At some point I felt like, 'What am I doing? Is this too ambitious?' Even the day the record was to be released I was scared to death," she reveals. "But I also knew if I was that scared, something big was about to happen."

It was a risk that paid off. According to Beyoncé, it's the album's imperfections that make it stand out.

"When I recorded 'XO' I was sick with a bad sinus infection. I recorded it in a few minutes just as a demo and decided to keep the vocals. I lived with most of the songs for a year and never re-recorded the demo vocals. I really loved the imperfections, so I kept the original demos. I spent the time I'd normally spend on backgrounds and vocal production on getting the music perfect. There were days I spend solely on getting the perfect mix of sounds for the snare alone. Discipline, patience, control, truth, risk, and effortlessness were all things I thought about while I was putting this album together."

TAGS/ Beyoncé , , Magazines , Celebrities , Top Stories , Most Read
GET POP CULTURED!
*Email entered incorrectly. Please try again.
By subscribing to our newsletter you agree to the Privacy Policy and Terms of Use
Daily
Weekly